In a joint statement on Syria, the US president and his Russian counterpart have agreed to fight "IS" extremists together. At a regional summit, the leaders also denied claims of Moscow interference in the US election. 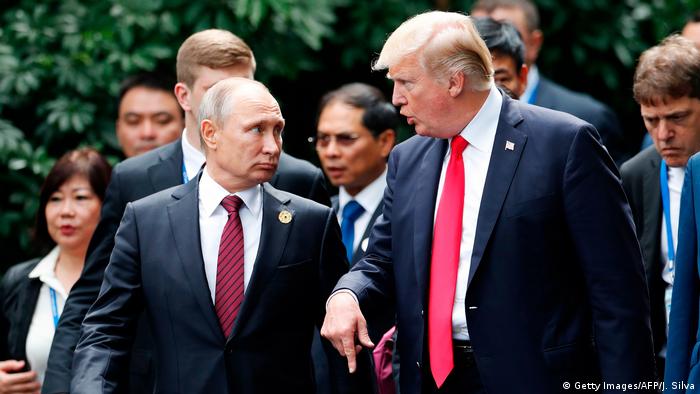 US President Donald Trump said on Saturday that his Russian counterpart Vladimir Putin assured him that Moscow did not interfere in the 2016 US election during their discussions on the sidelines of the Asia-Pacific Economic Cooperation (APEC) summit in Danang, Vietnam.

"Every time he sees me, he said: 'I didn't do that.' And I believe, I really believe that when he tells me that he means it," Trump told reporters aboard Air Force One en route to the Vietnamese capital, Hanoi.

"He said he didn't meddle. I asked him again. You can only ask so many times," Trump said. He also noted that Putin is "very insulted" by the accusation.

Putin also swatted away accusations of election meddling as a US "domestic political struggle," in comments to reporters.

"I think these are some sort of fantasies," he said of claims of collusion between the Kremlin and the Trump campaign.

Early on Sunday, however, Trump seemed to change tack at a press conference. The president said he had no interest in arguing with Putin, as he did not want to hinder Russia's work tackling in world problems.

US intelligence leaders have told lawmakers that Russian agents did indeed interfere in the presidential election.
Read more:  Why is the United States interested in the 'Indo-Pacific'?

Trump and Putin did not have a formal meeting at the APEC summit, but the two leaders met unofficially several times since late Friday and have even posed for a side-by-side photo. 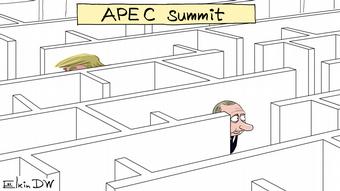 It was initially unclear whether Trump and Putin would formally meet

Russian and American relations are clouded currently by allegations that some of Trump's key aides collaborated with Moscow ahead of the president's win in 2016 elections. US officials may well be anxious to avoid any encounter between the two men that could be seen to reinforce the notion that they are in cahoots in any way.

Both the White House and the Kremlin have denied any wrongdoing.

Read more: APEC summit: Free trade in Asia in the age of protectionism

Trump has also accused US Democrats of standing in the way of a "good relationship" with Russia by accusing Moscow of meddling in the elections.

He said Russia's help would be beneficial in "solving" problems with North Korea, Syria and Ukraine, adding that "people will die" because of the Democratic "hit job."

Although no top-level formal Moscow-Washington encounter took place in Vietnam, the summit saw a brief meeting between Russia's Foreign Minister Sergey Lavrov and his US counterpart Rex Tillerson.

Lavrov, when asked to give the details of their talks, said only: "I can but I wouldn't."

Trump and Putin did issue a statement on Saturday in which they agreed to continue joint efforts to fight the terrorist group "Islamic State" (IS) in Syria until it is completely defeated.

The joint statement, published on the Kremlin's website, said that the two leaders also confirmed their commitment to Syria's sovereignty, independence and territorial integrity, and called on all warring parties to participate actively in the UN-sponsored peace process in Geneva.

According to the text of the statement, Moscow and Washington also agreed that there was no military solution to the conflict, which began in 2011 with peaceful protests against Syrian President Bashar al-Assad and has since grown into a multiparty war involving combatants ranging from government forces and "moderate" rebels to Islamist extremists such as IS.

Russia and the United States have taken different sides in the conflict, with Moscow giving military support to troops of its longtime ally Assad, while Washington until this year backed rebels it considered legitimate in their fight against the Syrian regime.

Reports in July 2017 said Trump had ended the clandestine CIA program of support for such rebels.

Russia has been flying a bombing campaign in Syria since 2015, when it stepped in to support Assad's rule, tipping the conflict very much in his favor.