Trump's former campaign manager Paul Manafort and two others have been charged by Special Counsel Robert Mueller. Manafort has pleaded not guilty to charges including "conspiracy against the US" and has been arrested. 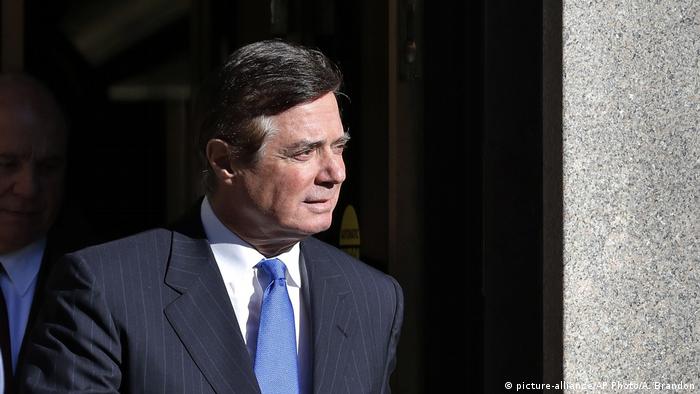 Paul Manafort, former campaign manager for Donald Trump's successful presidential bid, and his business associate, Rick Gates, pleaded not guilty to 12 counts of criminal action in a federal district court in the US capital on Monday, while a third campaign aide was revealed to have pleaded guilty.

"There is no evidence that Mr. Manafort colluded with the Russian government," his lawyer told reporters, adding the charges were "ridiculous."

Both men, who had earlier surrendered themselves to federal authorities, were placed under house arrest and surrendered their passports. Manafort's bond was reportedly set at $10 million (€8.6 million) and Gates' at $5 million.

The charges against both men include: conspiracy against the United States, conspiracy to launder money, unregistered agent of a foreign principal, false and misleading FARA statements, false statements and seven country of failure to file reports of foreign bank and financial accounts. FARA refers to the Foreign Agents Registration Act.

According to the indictment, Manafort and Gates engaged in a multi-million dollar lobbying campaign at the direction of Kremlin ally and former Ukrainian President Viktor Yanukovych. In total, they moved more than $75 million through offshore accounts, while Manafort specifically laundered more than $18 million.

A federal grand jury approved the indictment on Friday and ordered it sealed until Monday. The charges marked the first of their kind in an investigation into possible Russian meddling in the 2016 US presidential election. The indictment did not mention Trump and the charges against Manafort date back to alleged actions before he became involved in Trump's campaign.

In July, an FBI team raided Manafort's home. The investigators have been looking into Manafort's financial and real estate dealings and prior work for a pro-Russian political party in Ukraine.

Read more: Between Trump and Putin: What's the next move?

Special prosecutor Robert Mueller, a former director of the Federal Bureau of Investigation, is probing possible collusion between the 2016 election campaign of President Donald Trump and the Russian government. Mueller is also trying to ascertain whether Trump or his aides have tried to obstruct the investigation.

Both Trump and Russian officials have denied the allegations.

Within hours of Manafort and Gates' indictments, Mueller revealed that a Trump campaign aide, George Papadopoulos, had pleaded guilty on October 5 to lying to federal agents about contacts with Russian officials shortly after Trump assumed office in January.

Papadopoulos, who was arrested on July 27, admitted that he had contacted Russian officials as early as April 2016 about "dirt" on Democratic candidate Hillary Clinton in the form of "thousands of emails." He also admitted to trying to arrange a meeting between then-candidate Trump and Russian President Vladimir Putin with those officials.

He was ordered not to contact other Trump officials and prohibited from foreign travel but his guilty plea raised that prospect that he could be cooperating with investigators for the past three months.

The White House immediately discounted Papadopoulos' importance to the campaign, saying he was a mere volunteer with little influence. Spokeswoman Sarah Huckabee Sanders said his role was "extremely limited" and that "no activity was ever done in an official capacity on behalf of the campaign."

Trump attempted to deflect attention from his campaign by stating the suspected crimes committed by Manafort occurred before his involvement in Trump's campaign.

He also denounced allegations of collusion between his campaign and Russia as "phony" and a "witch hunt." He has suggested that more recent developments in the probe have aimed to distract attention from the Republican Party's "big push for historic Tax Cuts and Reform."

Trump also railed against Clinton, saying that the "facts are pouring out" about links to Russia by his former presidential rival. Trump and the White House have suggested that the real story of collusion with Russia is the sale of uranium to Moscow when Clinton was secretary of state.

"DO SOMETHING!" Trump urged in one of five morning tweets.

Michael Flynn, an adviser to Trump's campaign and later his national security adviser, is also a target of Mueller's investigation. Flynn was fired from that post in February after misleading Vice President Mike Pence about the extent of his conversations with Russian Ambassador Sergei Kislyak last year.

The indictment in the Russian meddling probe was first reported by CNN, which said the target could be taken into custody on Monday. 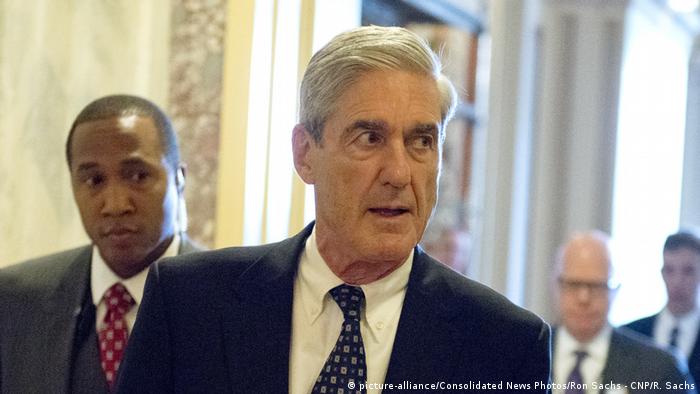 President Trump is alleged to have written a letter outlining his reasons for firing former FBI director James Comey. The letter, which was never sent, is reportedly now part of special counsel Robert Mueller's probe. (02.09.2017)

A 2016 meeting between some of Donald Trump's team and a Russian lawyer has been deemed relevant to a probe over possible links between Trump's election campaign and Russia. The lawyer denies any Kremlin connections. (22.07.2017)

In an early morning duet of tweets, President Trump called suggestions he was under investigation a "phony story" and a "witch hunt." The allegations surround links between Russia and Trump's election campaign. (15.06.2017)