Vietnam is hosting this year's Asia Pacific Economic Cooperation (APEC) summit, which gives it an opportunity to tout the benefits of global free trade. But convincing protectionists like Trump remains an uphill task. 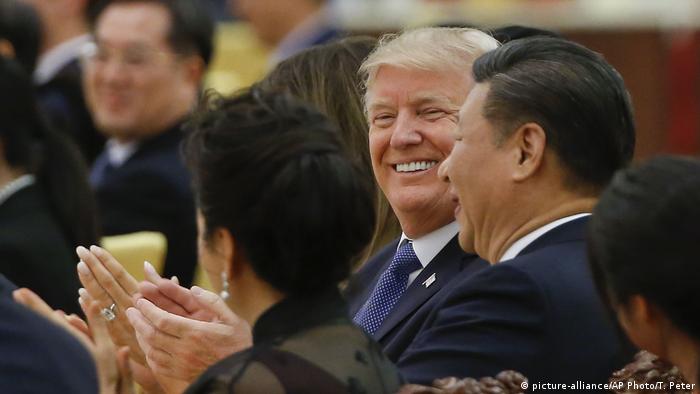 Mistrust of free trade has been on the rise in the West over the past several years. Reasons behind the trend are plentiful and diverse. In Europe, tens of thousands of people took to the streets to protest against the proposed Transatlantic Trade and Investment Partnership (TTIP) free trade agreement between the EU and the US. They were motivated by the fear that the pact would weaken (environmental, health and consumer protections and standards.

The same concerns elicited opposition to the EU-Canada Comprehensive Economic and Trade Agreement (CETA), a deal which, despite protests, provisionally came into effect in September.

In January, in one of his first moves after taking over as US president, Donald Trump signed a decree pulling his country out of the Trans-Pacific Partnership (TPP), an ambitious trade deal and linchpin of his predecessor Barack Obama's Asia-Pacific strategy.

The TPP was negotiated by 12 Pacific Rim nations - Australia, Brunei, Canada, Chile, Japan, Malaysia, Mexico, New Zealand, Peru, Singapore, Vietnam and the United States - which account for around 40 percent of the global economic output and 26 percent of world trade.

Trump's main argument, though, has been that the US could negotiate much better deals bilaterally.

Daniel Müller from the Hamburg-based German Asia-Pacific Business Association (OAV) says: "Overall, one has to conclude that multilateral free trade is in deep crisis."

"Asian economies, particularly the emerging ones, are most affected by this crisis," Müller told DW. That's because countries like Vietnam have opted for an economic model based on export-driven growth and trade-oriented industrialization, the expert added.

Nations with such an economic strategy are particularly dependent on the free movement of goods. "The current free trade crisis is putting pressure on these states, and they urgently need to look for alternatives and take countermeasures," said Müller.

This year's Asia Pacific Economic Cooperation (APEC) summit in Vietnam is taking place in this context. APEC is a multilateral forum that groups together 21 Pacific Rim countries and aims to promote free trade throughout the Asia-Pacific region. US President Trump, who is on a 12-day Asia trip, will take part in the summit.

Read more: The pros and cons of the Trans-Pacific Partnership pact

Against the backdrop of increasing headwinds to global trade, the APEC gathering at least offers an opportunity for Asian countries to formulate a common position.

APEC is not the most important organization in the Asia-Pacific region and it does not have the necessary clout to promote free trade on its own, Müller underlined. Still, he pointed out that the club has emerged as an important forum for political and economic coordination in a region where there is a lack of strong and influential institutions that can encourage dialogue and work to resolve conflict. "Countries must seize every opportunity to stay in the game." Only then will they be able to strengthen free trade, the OAV expert said.

This is also the stated goal of Vietnam, which is hosting this year's summit on November 11-12. Still, the weakness of APEC is glaring, says Que Anh Dang, a political analyst at the German Institute for Global and Area Studies (GIGA), a research institute based in Hamburg.

In 1994, APEC proposed setting up a free trade zone in the Asia-Pacific region in two stages, first by incorporating developed countries in it by 2010, followed by the inclusion of developing countries by 2020. That proposal came to naught.

Later, negotiations over the TPP deal as well as the Regional Comprehensive Economic Partnership (RCEP), a China-backed pact regarded as a rival to the former, have further undercut the importance of APEC.

The RCEP brings together the 10 members of the Southeast Asian grouping ASEAN plus China, India, Japan, South Korea, Australia and New Zealand, but notably excludes the US.

Over the years, APEC's significance has also been undermined by the fact that its agenda has been repeatedly changed, depending on the whims and interests of the country presiding over the summit. The result is that it's no longer clear what APEC stands for. Last but not least, APEC's non-binding nature has allowed overlapping, and sometimes contradictory, economic and trade agreements to be negotiated. As a result of all these factors, APEC faces a crisis of identity and credibility, Que Anh Dang said.

Vietnam is therefore facing a double challenge. It has to fight for free trade and, at the same time, pave the way for APEC to once again be perceived as a credible multilateral forum. In a bid to elevate APEC's global status, Vietnam is trying to adapt its goals to those set by this year's G20 summit in Germany, stated Que Anh Dang.

"Vietnam is trying to create synergies between APEC and the G20," the GIGA expert noted, pointing out that the four key items on APEC's agenda this year mirror the central themes of the G20 summit: sustainable, innovative and inclusive growth, regional economic integration, digitalization and sustainable agriculture in response to climate change.

The orientation toward Germany's agenda at the G20 meeting can also be seen from the fact that Germany became the first European country to be invited to the APEC summit. As an export powerhouse, Germany is a key supporter of free trade.

Southeast Asia expert Müller is skeptical as to whether APEC will be strengthened enough to meet the challenges facing export-oriented emerging economies like Vietnam. Free global trade can only be ensured when a leading world power takes responsibility for it and is ready to persuade other countries to do the same, either by offering incentives or applying pressure, he said. "Globalization needs leaders who are willing and able to provide so-called international public goods."

In terms of the economy, these include stable financial markets or a framework for conducting world trade, as provided by the World Trade Organization (WTO).

The US is increasingly reluctant to assume this leadership role. The EU is not in a position to fill the gap. "And with China, I doubt if Beijing even wants that," said Müller, citing the example of China's Belt and Road Initiative, a massive investment and infrastructure program proposed by President Xi Jinping aiming to connect China by land and sea to markets in Asia and Europe.

But the expert argues that instead of focusing on free trade and contracts, the Chinese project aims at expanding infrastructure. Economic integration is driven not by legal agreements but by roads, ports and railways. "It shows that China is concerned most of all with its own short-term interests and not worried about putting in place an internationally binding framework."

Against this backdrop, Vietnam is unlikely to make any real progress during the APEC summit. Given its economic model, the country has a genuine interest in strengthening the framework underpinning global free trade and also APEC. "But I am skeptical that Vietnam will succeed in this climate of growing anti-trade sentiment," Müller said. "It's, however, not clear whether this is just a temporary phase or whether we are currently experiencing a historic turn of events."