With TTIP talks stuttering, free trade is reaching its limits | Business| Economy and finance news from a German perspective | DW | 11.07.2016

Points of discord remain, time is running thin, and the public mood is souring on free trade - does TTIP stand a chance? The EU and the US are meeting for the 14th time, and the Sisyphean boulder is only getting heavier. 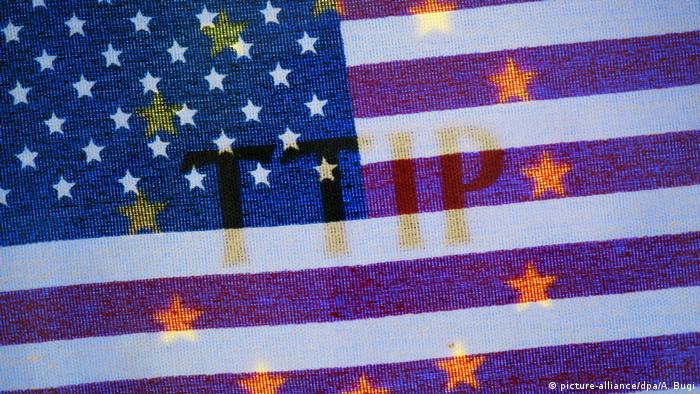 The European Union and the US have been negotiating the terms of their Transatlantic Trade and Investment Partnership (TTIP) now for three years - with the 14th round of talks soon to begin in Brussels. But they are far from reaching agreements on many important points.

Arbitration tribunals, for instance, are a hot-button issue in Europe, especially in Germany. Such private tribunals give investors the opportunity to sue a government if they feel that a country's laws restrict their "legitimate expectations." The EU and Canada were able to overcome this hurdle in their CETA (Comprehensive Economic and Trade Agreement) negotiations by agreeing to nix arbitration courts in favor of a permanent dispute settlement tribunal. But it remains unclear whether TTIP negotiators can strike a similar compromise.

The same goes for rules concerning government bids. There is a lot of money at stake, said Laura von Daniels of the German Institute for International and Security Affairs in Berlin. "Inside the EU, public bids amount to 16 percent of GDP," she said. "In the US, it is up to 12 percent."

Europeans feel they will be put at an unfair disadvantage when it comes to securing government contracts across the Atlantic. "The USA implemented a Buy American Clause in their stimulus packages," von Daniels added. "Bids must be given primarily to US companies, unless there is an important reason not to."

European negotiators are urging their American counterparts to relax these regulations. But the Americans might not have room to wiggle even if they wanted. "It is disputed whether the US government is even authorized to fix in an internationally binding contract how states and communities have to issue their public bids," von Daniels said.

And there is another issue that has European tempers running high. Do genetically modified groceries have to be labeled as such? When it comes to consumer protection, Europe follows a precautionary principle. That means that if it is suspected that a product is harmful, it should be banned, or at least clearly marked as dangerous. The US takes a different approach - the product is innocent until proven guilty.

This could change. Last Thursday, the US Senate passed a law that call for the labeling of groceries that contain genetically modified organisms. It is expected that the House of Representatives will also pass the bill.

But even if one tangle is smoothed, another, bigger one has emerged. The UK's vote last month to leave the EU has prompted many questions that will take a long time to answer and have shaken up political calculations on all sides.

At the moment, too much seems up in the air to foresee an end to negotiations. On a visit to Germany in April, US President Barack Obama said he expected the agreement to be hammered out by the end of the year. But since then, the prospect of free trade has grown more and more unlikely.

It is even uncertain whether the already finalized agreement between the EU and Canada will enter into force, after it was decided that it will have to be independently ratified by all national EU parliaments.

Is the TTIP for freeloaders?

Is TTIP for freeloaders?

There is considerable opposition in Germany, for instance. Jürgen Trittin, former German environment minister and current Green Party parliamentary representative, called CETA "a bad agreement." The Greens form part of the regional government in 10 German states, giving them sway in the country's upper house of parliament, the Bundesrat, which must ratify CETA.

"An agreement like that shouldn't be applied - neither provisionally, nor finally," Trittin added.

Peter Ramsauer, head of the German parliament's economic committee, links the opposition to the Canadian agreement to the older uproar over the US negotiations. "No one would get upset about CETA if TTIP did not exist," he said, decrying the resistance against free trade as irrational.

But in any case the resistance runs deep in society. "All surveys show that Germans are concerned it could come to an erosion of standards in our country and in the EU," said Laura von Daniels. From environmental standards and data protection to the matter of groceries, "people are worried."

TTIP is less of a cause for concern in the US. If people talk about the negotiations at all, the tenor is usually positive, von Daniels said. "Even unions, who are generally critical of free trade agreements, are hoping TTIP will increase workers' and environmental protection."

But free trade is nonetheless on the defensive there too, where with the Trans-Pacific Partnership (TPP), the US's agreement with eleven Pacific nations, including Mexico, Japan, Vietnam and Malaysia, is frequently lambasted.

TPP has become an abiding theme in the US presidential elections. Republican contender Donald Trump called it "a bad, bad deal." And Democratic candidate Hillary Clinton has grown more careful in her support of free trade agreements.

The US does not share Germany's big worries about labor and environmental standards. "The main concern is that cheap imports crowd out American companies and lead to further job losses," von Daniels said.

TTP has already been signed, but it too is awaiting ratification, in this case by the US Congress. Whether a TTIP agreement with the EU will ever make it this far is unclear. But it will take a big push to keep the wheel's spinning past President Obama's time in office, and now doesn't seem to be the time to expect one.

A newly leaked TTIP draft plays into fears that the the free trade deal will force Europe to lower its regulatory standards - sparking renewed worry for climate protection and development of renewable energy. (11.07.2016)

As EU and US negotiators have begun a new round of talks on the TTIP free trade pact, Greenpeace has published leaked documents, saying they would show Germany's drive toward renewable energy is in 'mortal danger.' (11.07.2016)

The European Commission has given in to harsh criticism - and will now let national parliaments vote on the trade agreement between Canada and the EU. With that, a long period of wrangling will ensue, says Barbara Wesel. (05.07.2016)