A momentous step shrouded in secrecy is currently underway: Serbia and Kosovo are planning to trade territories. But shifting borders in the Balkans is a mistake, writes guest policy expert Christian Schwarz-Schilling. 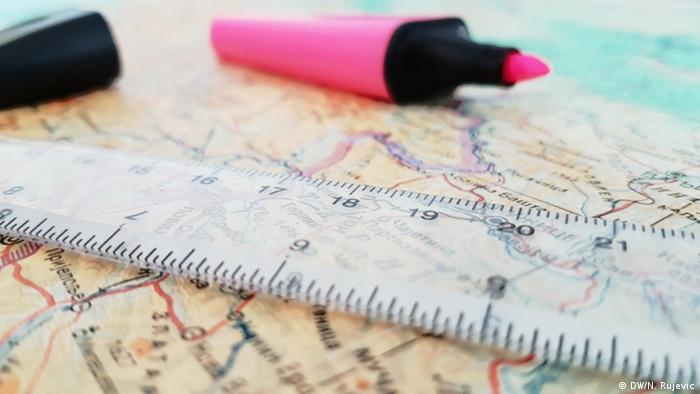 The West's ironclad common principle, that the practice of redrawing borders along ethnic lines be avoided at all costs, doesn't seem to matter anymore.

For the lobbyists, it's a job well done. Initially, the proposal was met with opposition from all sides — especially from the local populations — but now the states seem to be on track to soon follow through with their plan. Doing so would bring Serbia closer to EU membership, and would finally grant Kosovo full recognition as a state and a seat at the United Nations.

As a former high representative for Bosnia and Herzegovina I, along with my predecessors Paddy Ashdown and Carl Bildt, sent an open letter to EU foreign policy chief Federica Mogherini last August, warning that such a territory exchange would open Pandora's box.

It would be playing into the hands of separatist-nationalist forces — not only in the region, but also in Bosnia-Herzegovina and many other countries. It would pave the way for even greater upheaval, which almost always end in war.

This isn't just about the dream of Greater Serbia, which led to war in the early 1990s, but also, as I learned from Albania's Prime Minister Edi Rama in January, about a possible unification of Albania and Kosovo — an idea that has never been abandoned.

Rama told me that he greatly appreciated the steadfastness of Chancellor Angela Merkel and German policy on border changes. But he fears that attempts to finally liberate Kosovo from the shackles of Serbia will take too long, or will simply never come about. For that reason, he sees a merger of Kosovo and Albania as a real option.

It is very surprising that EU politicians in Brussels, who until now have strictly rejected border revision along ethnic divides, no longer see any risk and suddenly consider the principle to be entirely possible. What are the reasons for this attitude shift?

Renewed superpower politics in the Balkans

This is obviously where the United States comes in. President Donald Trump wants to withdraw from the Balkan crisis region, and agreed to the negotiations on the exchange of territory between Serbia and Kosovo — a complete turnaround in US policy to date.

One has to question Trump's intentions with this move. There has been speculation that he is pursuing a deal with Russian President Vladimir Putin on the division of influence between the two major players in the Balkans. According to this theory, Kosovo would join NATO and Serbia would remain under Russian influence — and would clearly reject any connection to NATO.

Of course, this would destabilize the region, especially Bosnia-Herzegovina. The Serb member of Bosnia's multiethnic presidency, Milorad Dodik, has been saying for years that he would only accept NATO membership for Bosnia and Herzegovina if Serbia followed the same path. With this move, Trump is making a concession to Russia, meaning the Kremlin's growing influence in the region would go unchallenged.

There's been further speculation that Trump wants to see both Kosovo and Serbia join the NATO alliance in order to limit Russian influence in the Balkans, according to talk in NATO circles. This could possibly explain the change in the EU's position.

What is clear, however, is that both Serbia and Kosovo would not have been able to undertake this until-now unacceptable territory exchange without US support. But it's impossible to know which of these theories is accurate, owing to the high unpredictability of the US president's actions. And both possibilities would have a huge impact on the Balkans.

Read more: Opinion  Redrawing borders in the Balkans is a recurring, bad idea

Who will pick up the pieces?

What's next? If you draw up new borders according to ethnic divisions, what do we do when a place like the Sandzak region, located in Serbia, wants to join up with Bosnia? Or when the Serb-run part of Bosnia called Republika Srpska aims to unite with neighboring Serbia?

What about North Macedonia? It has only just resolved its name dispute with Greece, and now it could potentially face a new problem — do the Albanians living in North Macedonia want to live in an ethnically pure state?

The question poses an existential threat to many European countries. Romania, which currently holds the rotating EU presidency, would experience vast repercussions, as would Greece. And Spain already has a plethora of problems with the separatist region of Catalonia.

At the same time, hardly anyone is considering universal human rights, the fundamental rights of the individual, the rights of minorities, constitutional law on a domestic level and human rights with regards to foreign matters.

All I can do is to appeal to the countries that make up the EU Council and the EU Commission to once again take into account Europe's values and principles. If we don't, we shouldn't be shocked when political mistakes are made that result in a renewed flow of refugees.

I find myself thinking back to the motto of this year's Munich Security Conference: "Who will pick up the pieces?" In Europe, major political mistakes generally aren't cleaned up by the countries that are responsible for the mess; inevitably, it's the responsibility of the European Union!

Christian Schwarz-Schilling was Germany's minister for post and communicationfrom 1982 to 1992. During the 1992-95 Bosnian war, he stepped down from the role in protest against the position of the German government on the conflict. Schwarz-Schilling served as the high representative for Bosnia and Herzegovina from 2006 to 2007.

Germany: 4 injured in shooting at Heidelberg University 1m ago