Greece: Calm after the Macedonian storm | Europe| News and current affairs from around the continent | DW | 28.01.2019

The controversial accord to rename Macedonia has caused a great deal of resentment in Greece. But with the issue now officially settled, life in Greece goes on. Florian Schmitz reports from Thessaloniki. 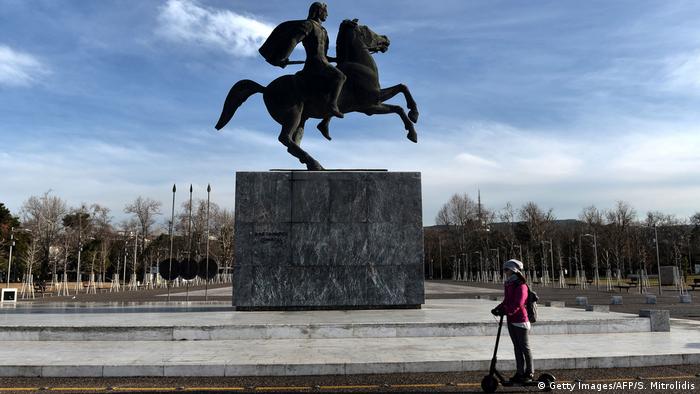 On Friday afternoon, the parliament in Athens finally provided clarity on an issue of central importance for the Greek people when it ratified the Prespes accord by a narrow majority. As a result, Greece's northern neighbor will now change its name to North Macedonia, and a name dispute that has been going on for almost 30 years will finally be resolved.

In Athens, a long way from the border, the issue can seem like a marginal one. But in Thessaloniki, the capital of the Greek region of Macedonia, it's an emotional subject.

"Well, there had to be some kind of solution," said the owner of an organic shop in the center of Thessaloniki says. But is she happy with it? "I'm not exactly happy that they're using the name Macedonia. But what can you do? That's the way it is now; life goes on."

Her shop is very popular with tourists. Every weekend people come here to buy high-quality Greek products — including people from across the border to the north. That's not going to change.

The Greek-Macedonian border is only about 40 minutes away from Thessaloniki. The many points of contact between the two feuding countries are especially apparent here. There are plenty of beach tourists and weekend visitors from North Macedonia.

The many small private universities are full of students from the neighboring country, and trade between the two is flourishing. Greek companies like Jumbo or the fast-food chain Goody's have long had branches on the other side of the border. Greeks drive to North Macedonia to get cheap petrol or inexpensive dental treatment, and to visit the casino.

But there's a big disparity between the day-to-day reality and the public perception. Nationalism and overzealous patriotism dominate the discussion — as do frequent clashes between people from both sides of the border. The discussion revolves around one key figure: ancient Macedonian king Alexander the Great.

A man from Pella, a village not far from Thessaloniki, is outraged by the controversial agreement. In ancient times, Pella was the capital of the kingdom of Macedonia. It was from here that Alexander the Great embarked on his bloody wars of conquest, which Greece likes to claim as part of its cultural heritage.

"Everything is written in Greek here. No one from the country north of the border can read a single word of it," said the man from Pella. For him, the name Macedonia is non-negotiable. "They're Slavs. They should have called themselves Vardaskar," he said angrily. Vardaskar is derived from the Vardar River, the source of which is in Macedonia. National-conservative voices in Greece, in particular, have argued for this solution. 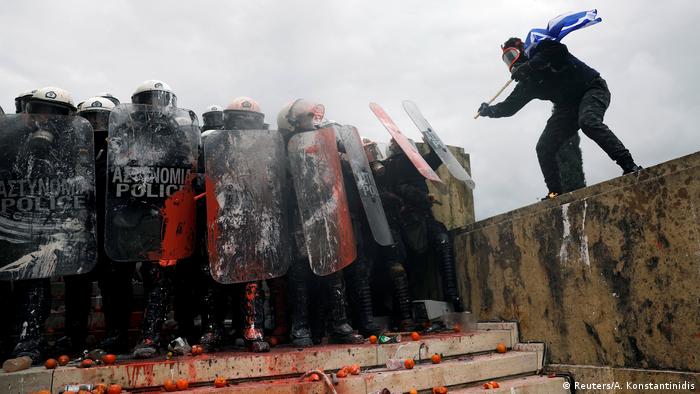 The name dispute has led to clashes between police and protesters

The name dispute has brought a lot of nationalist sentiment to the surface in Greece. A big demonstration in Athens last week was another reminder that right-wing movements in Greece have attracted new followers in the wake of the Prespes accord.

On Friday, media reported on a row between a Macedonian man and two Greeks: the Greeks had stolen the license plate of the man who was driving back to the border. In Thessaloniki, persons unknown recently destroyed the Jewish memorial on the city's university campus. For months now there have often been small, sometimes violent demonstrations by right-wing groups who see the settlement with Macedonia as high treason against the Greek nation.

Most people pay little attention to incidents like these. There are, however, very few who will openly support the agreement with North Macedonia, for fear of reprisals or attacks. "Don't we have other problems to deal with?" asked a student. This young woman, who was born in Thessaloniki, has had enough of the endless discussions about the name.

"We're facing big economic challenges. There are wars going on in many parts of the world. Climate change is making itself apparent," she said, adding that most people don't care whether or not Greece's northern neighbor is now called Macedonia.

For Greek Prime Minister Alexis Tsipras, this historic agreement is a foreign policy success. After his party split from its right-wing conservative coalition partner, ANEL, he had to rely on votes from the opposition and neo-liberal party Potami.

"Greek Macedonia has nothing to be afraid of," Potami's leader, Stavros Theodorakis, commented after the vote. He said the Greek parliament had taken a decision that supported Greek interests and would bring stability to the region.

Main opposition leader Kyriakos Mitsotakis of the conservative New Democracy party, however, described it as a difficult day for Greece. "I will do everything I can to limit the negative consequences that will result from this agreement," he said after the vote. Mitsotakis said that, for the first time, the inhabitants of the neighboring country had been recognized as having Macedonian identity and language — in this, Tsipras had gone against the will of the people.

A general election is set for Greece in October. Between now and then, Tsipras will find out the price he'll have to pay for Friday's historic agreement. In the meantime, life continues on the streets of Thessaloniki. The main thing people are hoping for here is that winter will soon be over. The warmer weather will bring the tourists — and the name of the country they come from will be irrelevant.

Thousands of people in Greece have taken to the streets to protest against a name change compromise with Macedonia and Prime Minister Alexis Tsipras. The demonstrations have revived nationalist sentiment in the country. (07.06.2018)

Macedonia referendum: Country at a crossroads

On Sunday, citizens of the Republic of Macedonia face a historic vote. Should they change their country's name — and in doing so, continue on the path toward the European Union and NATO? (29.09.2018)

In a historic move, Macedonian lawmakers overwhelmingly voted for renaming the ex-Yugoslav country "North Macedonia." The move will "open the door for the future," according to Macedonian Prime Minister Zoran Zaev. (11.01.2019)