In a historic move, Macedonian lawmakers overwhelmingly voted for renaming the ex-Yugoslav country "North Macedonia." The move will "open the door for the future," according to Macedonian Prime Minister Zoran Zaev. 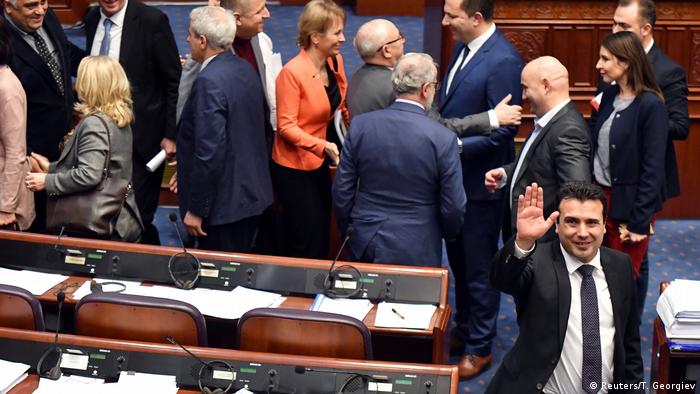 Over two-thirds of the parliament in Skopje voted in favor of renaming their country "North Macedonia" on Friday, passing the threshold required for amending the constitution in the Balkan country.

The move aims to settle the decades-long dispute with Greece over Macedonia's name, with Athens claiming that the name implies territorial claims on the Greek province of Macedonia and accusing the authorities in Skopje of trying to link their Slavic nation with Alexander the Great. Greece has been blocking Macedonia from joining NATO and the EU over the issue.

NATO and the European Union welcomed the decision, which both organizations had backed.

NATO leader Jens Stoltenberg said it was "an important contribution to a stable and prosperous region."

Greece to vote on change

However, the name change will only go into effect if Greek lawmakers ratify the 2018 accord between Zaev and Greek Prime Minister Alexis Tsipras. This is far from certain, as many Greek nationalists object to any mention of "Macedonia" in the name of the neighboring country.

Tsipras has said the parliament would vote on the deal by the end of the January.

Friday's session saw 81 Macedonian deputies aligned with the ruling party vote in favor of four constitutional amendments, including one proposing the name change. The opposition VMRO-DMPNE boycotted the vote.

The process to change the constitution started in October 2018, with the pro-Zaev coalition managing to snatch 80 votes in favor. The laboriously won majority included eight VMRO-DMPNE deputies. They were subsequently purged from the party.

Some conservative lawmakers accused the government of offering millions in bribes in exchange for votes. Zaev's party denied the claims and pledged to respond with legal action.