Thousands of people in Greece have taken to the streets to protest against a name change compromise with Macedonia and Prime Minister Alexis Tsipras. The demonstrations have revived nationalist sentiment in the country. 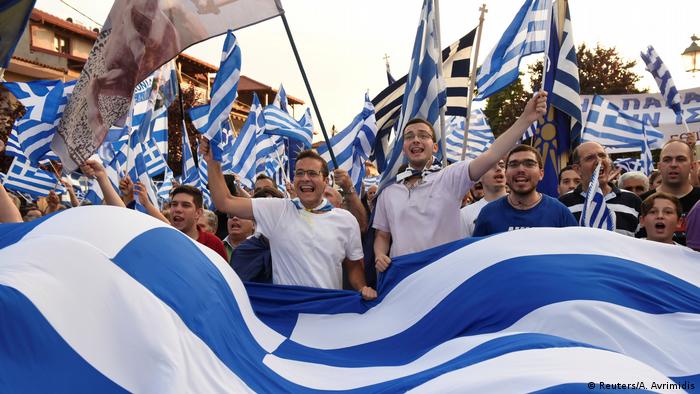 The northern Greek city of Pella was once the capital of ancient Macedonia, but you wouldn't know it by a visit today. Here in this region, where Alexander the Great once staked out his empire, unemployment is 30 percent. That is just one reason people are angry with Prime Minister Alexis Tsipras.

It is also here, less than an hour's drive from the Macedonian border, that resistance to the current rapprochement policy between Athens and Skopje is fiercest. Beyond the archaeological excavation sites in the old city, there is little to see in Pella. But on this afternoon, music is blaring from loudspeakers as throngs of people are pushing their way through streets normally scattered with school groups or history-minded tourists.

In Pella and 23 other cities around the country, people, mostly conservative, are taking to the streets to demonstrate for a Macedonia that is exclusively Greek. "Almost everyone in the city is opposed to them up there calling themselves Macedonia, even if they put 'north' in front of it. Macedonia is Greece," explains one young woman.

Interest groups, some supported by the church as well as opposition parties, helped bus residents from across the region to today's demonstration. The small city is awash in a sea of Greek flags. At some souvenir stands, yellow Byzantine flags adorned with black eagles — often a favorite of nationalists — can also be seen. T-Shirts printed with the words: "Macedonia is Greece," send a clear message to both countries' governments: Keep your hands off our history!

"Look at the excavation sites. Everything they find is written in Greek! None of it is Slavic," the region's mayor bellows into the microphone. The crowd cheers. One young man carries a sign that directly addresses Zoran Zaev, the Macedonian prime minister: "Zaev! You can't choose to be a Macedonian, you have to be born one!" The demonstrators here agree: Macedonia belongs to the Greeks. Dissenting opinions in areas like this are difficult to come by.

In the end, most people couldn't care less what their northern neighbors choose to call themselves — just as long as the word Macedonia isn't part of the name. "It's not our problem that they have been living a lie lately," complains an old man.

Wind in the conservatives' sails

Most people's anger is directed at Prime Minister Tsipras and Foreign Minister Nikos Kotzias. Despite a number of setbacks in recent weeks, both are convinced that a solution is around the corner. On Monday, Kotzias asked citizens to "just stay patient for a couple more days." Recently an agreement looked to be at hand, then it suddenly fell apart. Opposition parties in Skopje are also against a compromise. Athens' calls for an "erga omnes" (toward all) legal solution which would also be accompanied by constitutional changes, and thus be internationally binding, have garnered little support in Skopje.

That was one of the reasons recent demonstrations in Macedonia's capital mirrored those held in Greece. They were marked by an excess of nationalist polemic and little appreciation for mutually acceptable compromise. In Greece, a constitutional amendment would not be enough of a compromise for Greek citizens, either. "History cannot be built on lies. It won't change anything if you carve it in stone now!" a speaker screams into the microphone. 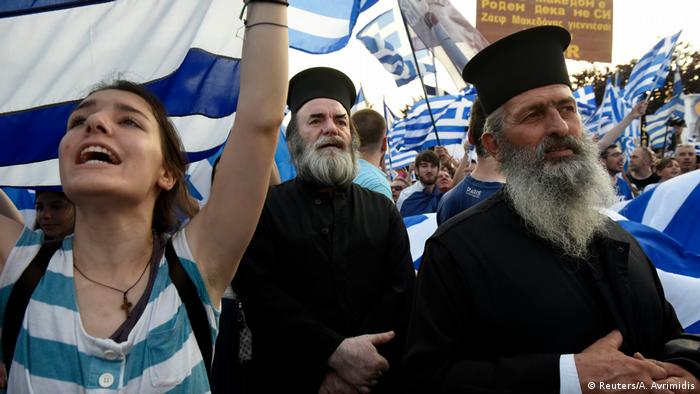 Meanwhile, many conservative leaders in Greece have remained conspicuously silent. Even the church announced that this was an issue for politicians to resolve, not religious figures. Conservative opposition leader Kyriakos Mitsotakis, who rarely misses an opportunity to attack Tsipras, has also been astonishingly quiet. He told fellow party members that it was up to them to decide if they wanted to participate in demonstrations or not. Several showed up, many stayed home. Nevertheless, the usual war of words between politicians from the left and the right has remained relatively calm.

It seems Tsipras' opponents can just lean back and watch for the moment. Mitsotakis is keeping an eye on the fact that the EU and NATO both support a solution favoring Macedonia. Should voters support his party in next year's Greek parliamentary elections, it would seem clever to not lean in too hard on the matter now. Ultimately, Mitsotakis wants to make sure he keeps all international doors open. Moreover, the conflict is simmering enough without him needing to turn up the flame.

Even if Athens and Skopje reach a compromise on the name in the coming days or weeks, that certainly won't be the end of the story for people in Pella.