The EU has offered Kosovo and Serbia the prospect of membership if they resolve their differences. A land swap may look like an easy fix, but it will only cause more problems, writes ex-Balkans mediator James W. Pardew. 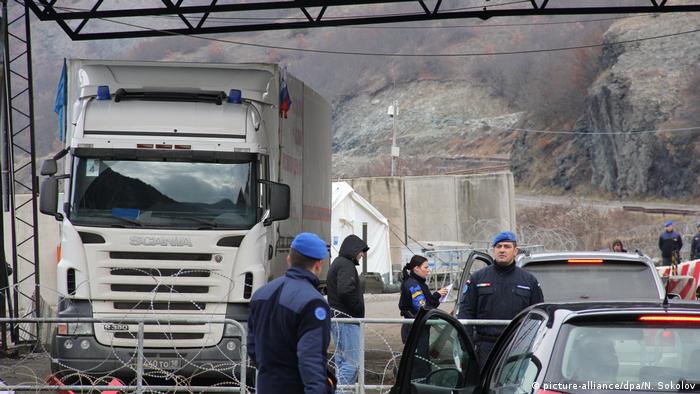 American diplomacy in the Balkans, from the Dayton Agreement in Bosnia in 1995 until Kosovo declared independence in 2008, never pursued the idea of redrawing the international borders of the nations emerging from the breakup of Yugoslavia.

Instead of proposing changes to national borders, Washington favored solving ethnic relationships through the instruments of democracy. On a practical level, the US-led talks were difficult enough without adding endless problems of negotiating national boundaries.

The closest the US came was acceptance of an internal entity boundary between the Republika Srpska and the Federation of Bosnia-Herzegovina in the Dayton Agreement for Bosnia. The separation created by that element of the Dayton Agreement only promoted ethnic bitterness and division and encouraged external meddling in Bosnia's internal affairs.

Unfortunately, every so often, someone rediscovers the idea of changing national borders to solve ethnic disputes. The latest proposal, which apparently has some appeal in Pristina, is to trade northern Kosovo above the Ibar River, where many Serbs live, for some chunk of territory in the Presevo Valley of southern Serbia, where many Albanians reside. Supposedly, this will allow both Kosovo and Serbia to move toward membership in the European Union.

The negotiated trade of territory is a very bad idea. Redrawing national borders to solve ethnic disputes is a colonial-era practice that was designed to create these largely ethnically pure territories. The concept appeals to ethnic nationalists and has more than a little hint of racism. It did little to stop ethnic tensions in the past, and it is unlikely to do so now.

A Kosovo-Serbia land swap also is very likely to create greater instability in the region. If it goes through, Serbia and the Republika Srpska in Bosnia almost certainly will start clamoring for other territorial trades.

The ongoing Russian effort to promote instability in the Balkans is another reason to be cautious about the Kosovo-Serbia land swap. Given Belgrade's affinity for Moscow and Russia's efforts to sow discord throughout the Balkans, the idea of redrawing borders fits well into the Russian strategy of undermining democracy and stability in the region. Redrawing Balkan national borders in the borders also would be consistent with Russia's actions in Georgia and Ukraine.

Unfortunately, the self-absorbed Trump administration is absent from important issues in Europe these days. Republican administrations have never shown much interest in the Balkans, and the Trump administration is even less inclined. John Bolton, the current national security advisor, announced — ironically in Kyiv — a few days ago that the US would not oppose a territorial swap between Kosovo and Serbia.

Drawing new lines on a map always looks like a simple solution. But it's not. Questions about residual Serbs living in Kosovo and Albanians living in Serbia will be troubling. Equating the value of the territory being transferred will be difficult to determine. Kosovo likely will demand full recognition of its sovereignty and separation from Serbia before any deal can be completed. Serbian access to historic sites in Kosovo also must be resolved. The negotiating issues are very tough with no assurance of an agreement.

The decision to shift away from the democratic principle of the equality of citizenship to address ethnic tensions to an alternative concept of separating ethnic groups by territory will be a fundamental break with the successful international effort that ended and prevented wars in the Balkans from 1995-2008.

The use of the principles of democracy — equal justice, opportunity and treatment of citizens — may take longer and may require more effort to improve ethnic relations in the region. But in the long run, the equality of citizenship offered by democracy is a far better and more stable approach to resolving the ethnic strains remaining in the Balkans than redrawing borders.

James W. Pardew spent his career working in the US military and State Department and was instrumental as a US mediator in the international effort to bring peace to the Balkans during the 1990s. He served as the US ambassador to Bulgaria from 2002 to 2005.

Working in Germany is a dream for many people from the poorer Balkan states. But the lengthy bureaucratic process to obtain a visa is making it impossible for some, and not all employers can wait. (04.08.2018)

Tensions in the Serb-majority northern part of Kosovo are rising ahead of a deadline to set up an association of Serb municipalities in the region. Serbia's president has told compatriots "peace is in our best interest." (04.08.2018)

As Orthodox Christian nations on the frontiers of Europe, Russia and Greece have long enjoyed close ties. The recent name dispute with Macedonia, however, has led to a falling out between the two countries. (03.08.2018)

Opinion: International Women's Day is a day of mourning for Africa 16h ago