Working in Germany is a dream for many people from the poorer Balkan states. But the lengthy bureaucratic process to obtain a visa is making it impossible for some, and not all employers can wait. The ability of people from the Western Balkans to gain entrance to Germany and work is currently under threat by the length of time taken to process visa applications. Citizens of Albania, Bosnia-Herzegovina, Kosovo, Macedonia, Montenegro and Serbia — all Balkan states in the midst of joining the European Union — have been able to enter Germany on working visas since November 2015. The agreement is part of the bureaucratic migration channel known as the Western Balkan settlement. The only prerequisite is that applicants must already have a binding job offer.

Read more: Why it's tough for some Asians to get German visas

But far more visa applicants are still waiting for their work permits to be processed, and the delay is lengthy.

"There has been an enormous increase in working visa applications from the Western Balkans," the German Foreign Ministry confirmed to DW, adding that the number of applications continues to rise.

The waiting period between an applicant's request for a visa appointment and the actual date the application is lodged has grown particularly long, according to Carola Burkert, an expert for migration at the Institute for Occupational Research (IAB).

"Imagine, you have an offer," said Burkert, "that means the employer also needs to know the outcome and, if for whatever reason, the prospective employee is unable to take up the position because they are not issued a visa within a workable timeframe, the employer must then take alternative measures to fill the position."

That is precisely what happened to Bekim Imeri. The truck driver from Gostivar in Macedonia received an employment contract from a company in the west German city of Paderborn. But following a wait of several months, the work offer was withdrawn by the employer. "No one sits around waiting for you in Germany," said Imeri.

Read more:Why few visas are issued for Africans wanting to come to Germany

Following this setback, the 46-year-old began another search for employment in Germany and was able to secure a new job offer at the Eraslan logistics group in Stuttgart. This time, Imeri personally brought this employment contract along with a new visa application to the German embassy in Skopje, where he was finally seen after waiting for more than seven hours. But Imeri worries every day that his second chance at a working in Germany might also be lost.

A new study by the IAB highlights a significant discrepancy between the number of visas issued and the number of approvals by the German Federal Labor Agency, which is the final hurdle necessary in the application process. The figures speak for themselves — between November 2015 and September 2017 the number of working visa applications reached 128,000, but of those only 38,000 of the permits were issued.

Why does it take so long to get a work visa?

"The waiting period for visa applications is always dependent on the current visa demand and the available capacity to process the applications at the respective visa point." That is the explanation given by the German Foreign Ministry to DW. German embassies in the Western Balkan states have been "bolstered to maximum capacity," the Foreign Ministry added, explaining that, "the current resources at the embassies have been exhausted." 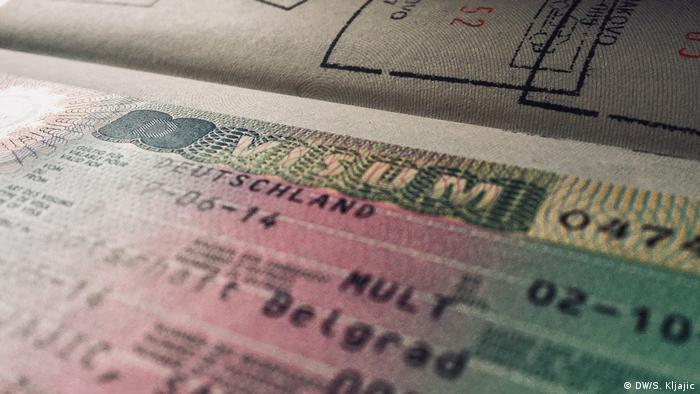 The German embassy in Kosovo's capital, Pristina, dealt with a total of around 50,000 visa applications in 2017, ranging from short-stay visas for tourists to long-term visas that enable study, family reunification or employment. However, although visa processing capacity has already been significantly increased and will continue to increase this year, demand continues to outweigh capacity. The same bottleneck situation has also occurred at the German embassy in Belgrade, Serbia.

"In Kosovo, it's easier to win the lottery than to get a German visa — it is a grueling procedure," Zgjim Berisha, who is in his final year of specialist surgery training at the university hospital in Pristina, told DW. "I know some well-trained doctors and nurses with German language skills who would like to work in Germany. The only obstacle is the visa."

"By June this year, the waiting time for an appointment at the German embassy was already four to five months," said Dejan M., a Serbian who received a job offer from a Berlin IT company in February and has been waiting for an appointment ever since. "Today it is seven."

Kleis Hazizi from Albania, who has a contract offer as a freight forwarder at a company in the eastern German state of Thuringia, has been waiting for five months for a visa. He submitted the necessary documents months ago.

The IAB's Burkert views the lengthy procedure as a tool for managing migration. "It has been said that we have economic migration from the Western Balkans, so we expand the legal channels for visas under certain conditions," she said. "But bureaucratic infrastructure has not been redesigned or expanded quickly enough, and this has resulted in a dilemma because it is too frustrating on many levels."

The impact of the situation is not only being felt by hopeful workers from the Western Balkans. In Germany, many employers are waiting with frustration for somebody to pick-up their would-be employees' documents from the towering stacks of paperwork piling up within the walls of German embassies.