It's not easy for Africans to obtain a visa to visit Germany. A DW data analysis reveals that one in five applications is rejected, far more than for other parts of the world. 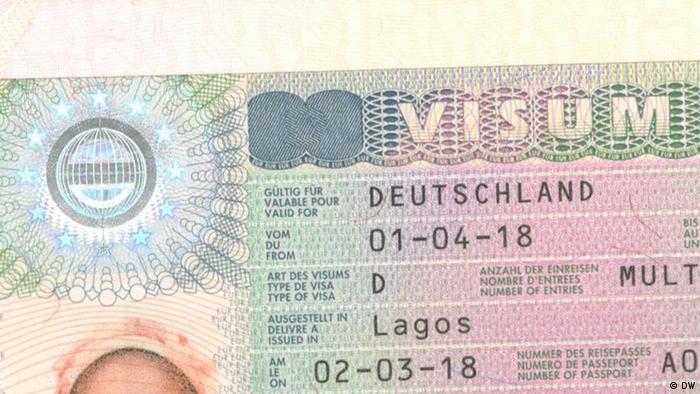 Read this article in Amharic, French, German, Hausa or Portuguese.

Grace Boateng (not her real name) hadn't imagined it would be so difficult. Three years ago, the 26-year-old Ghanaian submitted her first application for a visa to come to Germany. "At the end they said: Sorry, we can't give you a visa. We're not sure if you will return to Ghana afterwards," she said in interview with DW. Grace insists she had fulfilled all the requirements. "I said: 'I showed you my bank statements, I have an apartment in Accra, I have family here. What more do you want?'"

But her appeal against the decision was rejected, as were two further applications. She says she finally obtained a visa after applying for a fourth time. Grace believes her country of origin was the reason for the rejections. "Why is it easier for people from other countries to come here and then it is so difficult for Africans to come here? What is the difference between someone from China, from Australia? We are the same human beings, we pay the same fees, we come with the same requirements that you ask," she said.

Grace Boateng is not alone in thinking this. But is there any truth behind this assumption? DW journalists have analyzed data concerning the issuing of visas by German embassies between 2014 and 2017. Their main focus was on applications made for long-term visas for the purpose of study, work or family reunions. "Schengen visas" for short visits were not part of the study.

The number of visa applications which were processed and decided upon by all German embassies and consulates between 2014 and 2017 rose by 58 percent, while the number of rejections increased by 131 percent. During this period, only around 10 percent of decided applications came from Africa. Many more came from Asia (60 percent) and non-EU countries in Europe (23 percent). Africa tops the list of rejections —  22 percent of all processed applications were turned down. That's at least one in five. From Europe, only one in eight applications got the red light and from Asia only one in ten. In other words, applications from Africa are turned down twice as often as those from Asia.

It is difficult to pinpoint concrete reasons for this. The German Federal Foreign Office was not willing to grant DW an interview to discuss the findings. However, it did provide a statement saying that decisions on visa applications are made by the respective embassies based on objective criteria. Applicants must provide details about their income in order to prove that they can provide for themselves financially while in Germany, or must prove they know someone here who would be responsible for such costs. Also, the foreign ministry says, there must be a plausible reason for the application. In cases of family reunions, the applicant must prove that he or she is married or related to the person living in Germany. The foreign ministry does not instruct embassies to subject applications from a specific country to a tougher vetting procedure or turn down more from some countries compared to others.

But migration researcher Jochen Oltmer believes that nationality does play a role in the decison-making process. "It's always also a matter of the political situation in the home country of a visa applicant," the professor at the Institute for Migration Research and Intercultural Studies at the University of Osnabrück told DW. The question is whether entry into Germany is seen as likely to pose a threat to security, health or the social system. Oltmer thinks these considerations could play a role, particularly in the case of visa applicants from Africa. "Is it a question of a rich democracy or a poor dictatorship? If one looks at the general view of Africa here, it is widely seen as a continent marked by poverty, extreme inequality and high migration potential."

This could also explain why there are big differences between individual countries concerning the number of visa rejections. In Nigeria, for example, 5,268 applications were decided between 2014 and 2017, in South Africa the figure was 4,089, of which just six percent were rejected, while in Nigeria 24 percent were turned down. "Nigeria is a very populous country which in recent years has been linked with the following factors: a high migration potential, extremely violent conflicts, Boko Haram terror and serious human rights violations," Oltmer said.

The figures reveal a large contradiction between official German policy and reality. Beginning last year, Germany promised to make it easier for young Africans to enter this country. "We want to make it possible for more young people from Ghana to study or learn a trade in Germany. I think we must fight illegal migration but, on the other hand, we must also open up legal opportunities, especially for young people," Chancellor Angela Merkel said during a visit by Ghana's President Nana Akufo-Addo in February.

The young Ghanaian Grace Boateng has come to her own conclusion about German visa policy. "I have the personal experience where I went to the embassy for my appointment. After my appointment I got a letter which said 'No, you cannot go.' On my way out, I met somebody who said, 'Oh no, this was my seventh time that this is happening.' Then why are you asking people to apply and pay money? Some people come from very far away and then you reject this person so many times. That's absurd."

The G20 Compact with Africa appears to be gaining strength as the African countries that signed the deal meet to discuss new strategies. (05.04.2018)

Australia may be about to open the door to fast-track visas for white South African farmers. Some accuse Australia of double standards after the UN recently slammed Canberra for illegally detaining asylum-seekers. (15.03.2018)

Ghana: President vows to step up fight against youth unemployment

President Nana Akufo-Addo has promised to create thousands of jobs. But it’s a daunting challenge and many young people remain skeptical over the government's ability to deliver. (09.02.2018)

Interactive table with the data behind this analysis

Code behind this analysis