Why it's tough for some Asians to get German visas

A DW data analysis reveals that the majority of applications for a German visa come from Asia. While the success rate is better than in places like Africa, one in ten applicants from the continent faces rejection. 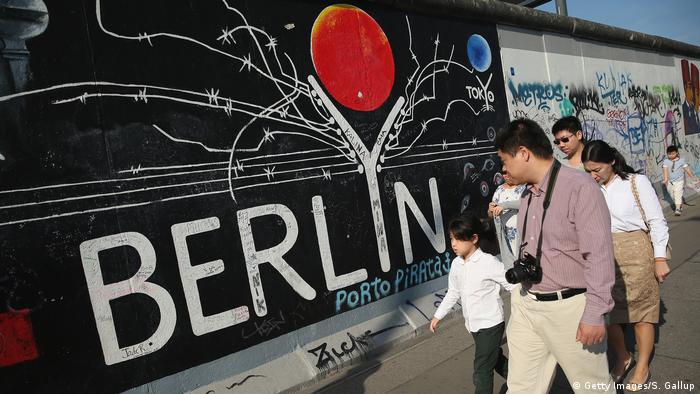 Read this article in Chinese, Hindi, Indonesian or Urdu.

Every Asian who had to obtain a long-term visa for the purpose of study, work or family reunions in Germany understands the hassle involved. Some claim that over the past several years it has become tougher to get German visas.

A Chinese restaurant owner in Germany, on condition of anonymity, told DW that she has been looking to recruit a chef from China for a long time, but has had difficulties obtaining a visa for him. His application has been rejected twice, the owner said, adding that the same man had obtained a German visa without any problem when he applied several years ago. This case points to a tightening of visa rules, she noted.

But this view is not shared by everyone, not even some fellow Chinese.

A human resources manager at a major Chinese firm told DW that she has been dealing with the work visa-related applications of her colleagues for years, and never had any difficulties. "It won't be too difficult when someone is working for a big Chinese company," she said.

However, she pointed out, adhering to German regulations and preparing the documents accordingly are very important for a successful visa application. 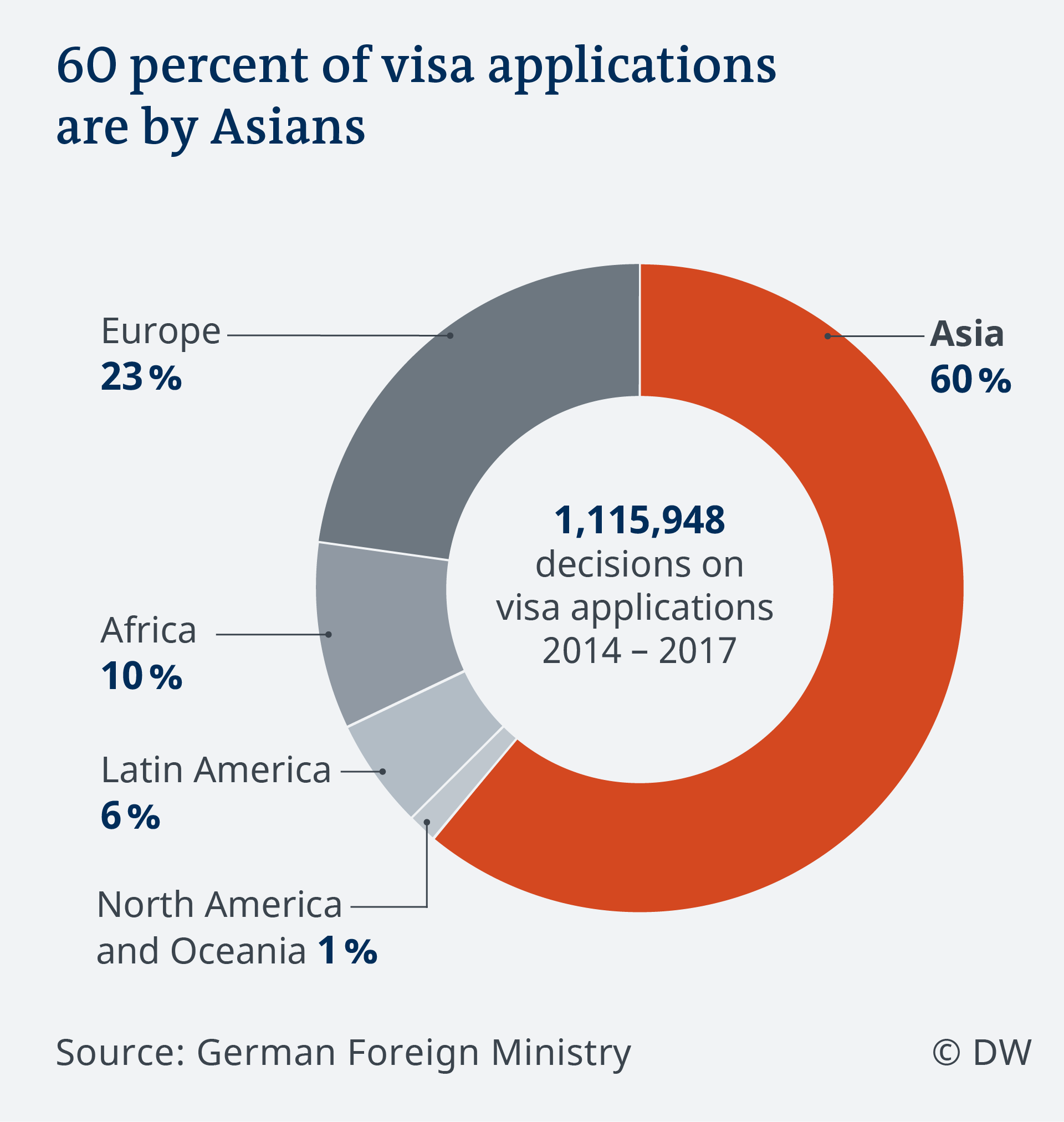 To assess regional disparities when it comes to obtaining German visas, DW journalists have analyzed data concerning the issuing of visas by German embassies between 2014 and 2017. Their main focus was on applications made for long-term visas for the purpose of study, work or family reunions. "Schengen visas" for short visits were not part of the study.

The number of visa applications that were processed and decided upon by all German embassies and consulates between 2014 and 2017 rose by 58 percent, while the number of rejections increased by 131 percent.

During this period, the majority of decided applications (around 60 percent) came from Asia. And one in ten applications from the continent was rejected.

There are, however, huge differences when it comes to the application success rate between various countries. For instance, more than one in four applications from Bangladesh are rejected, only one in 20 from China, and less than one in 100 from Japan.

Read more: DW investigates why few visas are issued for Africans wanting to come to Germany

It is difficult to pinpoint concrete reasons for this. The German Federal Foreign Office was not willing to grant DW an interview to discuss the findings. However, it did provide a statement saying that decisions on visa applications are made by the respective embassies based on objective criteria.

Applicants must provide details about their income in order to prove that they can provide for themselves financially while in Germany, or must prove they know someone here who would be responsible for such costs. Also, the foreign ministry says, there must be a plausible reason for the application. In cases of family reunions, the applicant must prove that he or she is married or related to the person living in Germany.

The foreign ministry does not instruct embassies to subject applications from a specific country to a tougher vetting procedure or turn down more from some countries compared to others.

Furthermore, the foreign ministry stated that rejection rates are lower in cases where the purpose of the application is related to employment. But they are higher when it comes to family reunification, due to the problem of fake documents in many countries.

Fake documents are, in fact, a big problem in Asia as well as in other regions of the world. As a consequence, Germany has stopped the so-called legalization of documents, meaning recognizing them as with full legal effect, from various countries, including Afghanistan, Bangladesh, India and Pakistan. Countries like Indonesia, China and Iran are, however, not on this list. 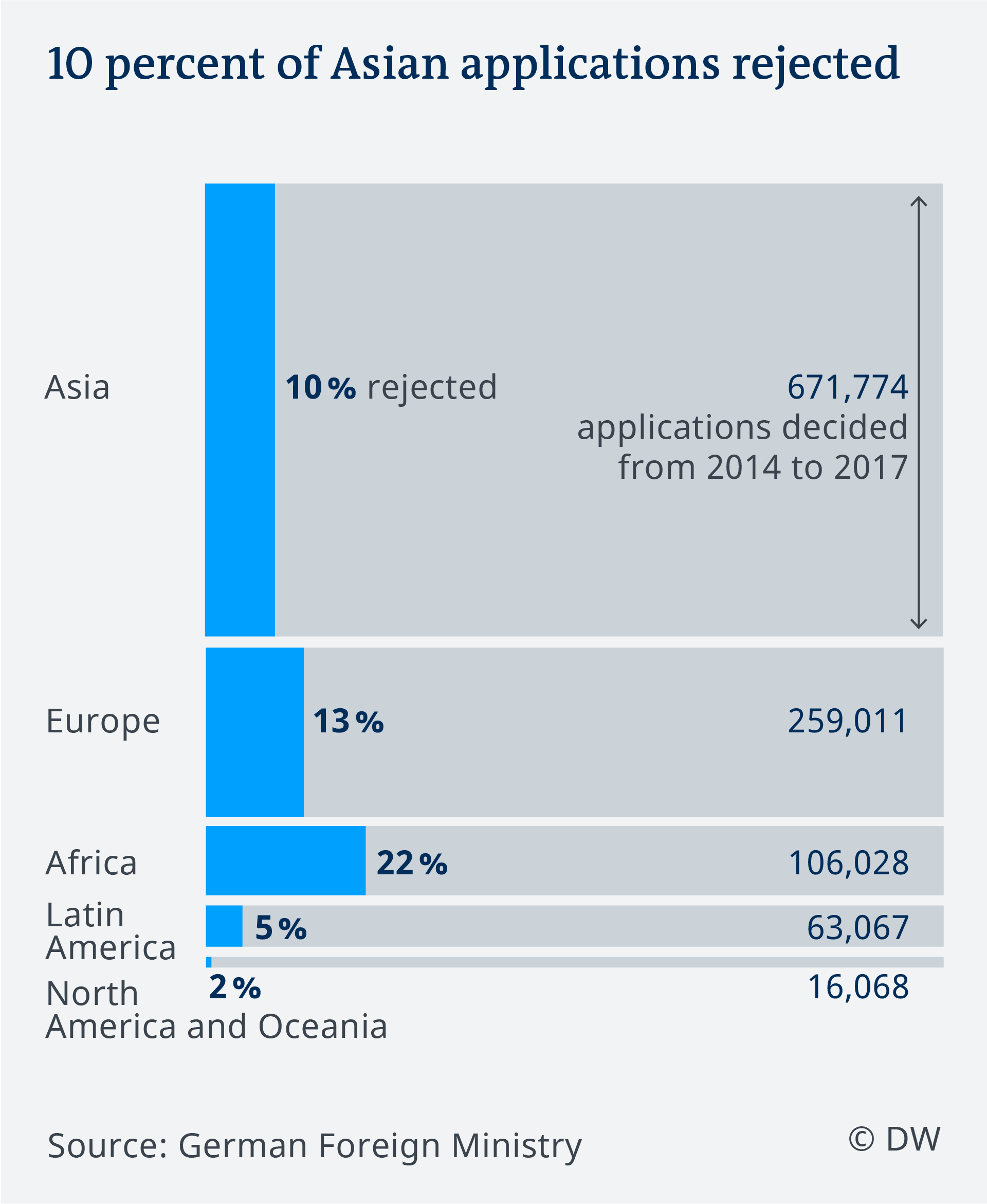 Migration researcher Jochen Oltmer believes an applicant's nationality does play a role in the decision-making process. "It's always also a matter of the political situation in the home country of a visa applicant," the professor at the Institute for Migration Research and Intercultural Studies at the University of Osnabrück told DW. The question is whether entry into Germany is seen as likely to pose a threat to security, health or the social system.

In addition to the above-mentioned "hard criteria," there are "soft criteria," such as the assessment of how plausible the return of the applicant is.

This, in turn, is often linked to the image of a country, as Oltmer points out: "What is the overall assessment of the situation in the respective country or continent? What about the dangers associated with migration from certain parts of the world?"

While Africa is generally perceived in Germany as a continent marked by poverty, extreme inequality and high migration potential, Asia is viewed differently. It is regarded as a continent of the future with enormous economic potential.

Germany, for instance, wants to improve the way it manages migration from countries like India and China. India has the reputation in Germany of being a country of high-tech computer experts whose expertise is urgently sought after in Europe's largest economy.

China, with its global economic might, is extremely important for Germany. "In the last 10-15 years, we can observe that the immigration of students from China to Germany has picked up," said Oltmer, adding that this development has been welcomed in Germany, as students are seen as future bridge-builders for business and science. 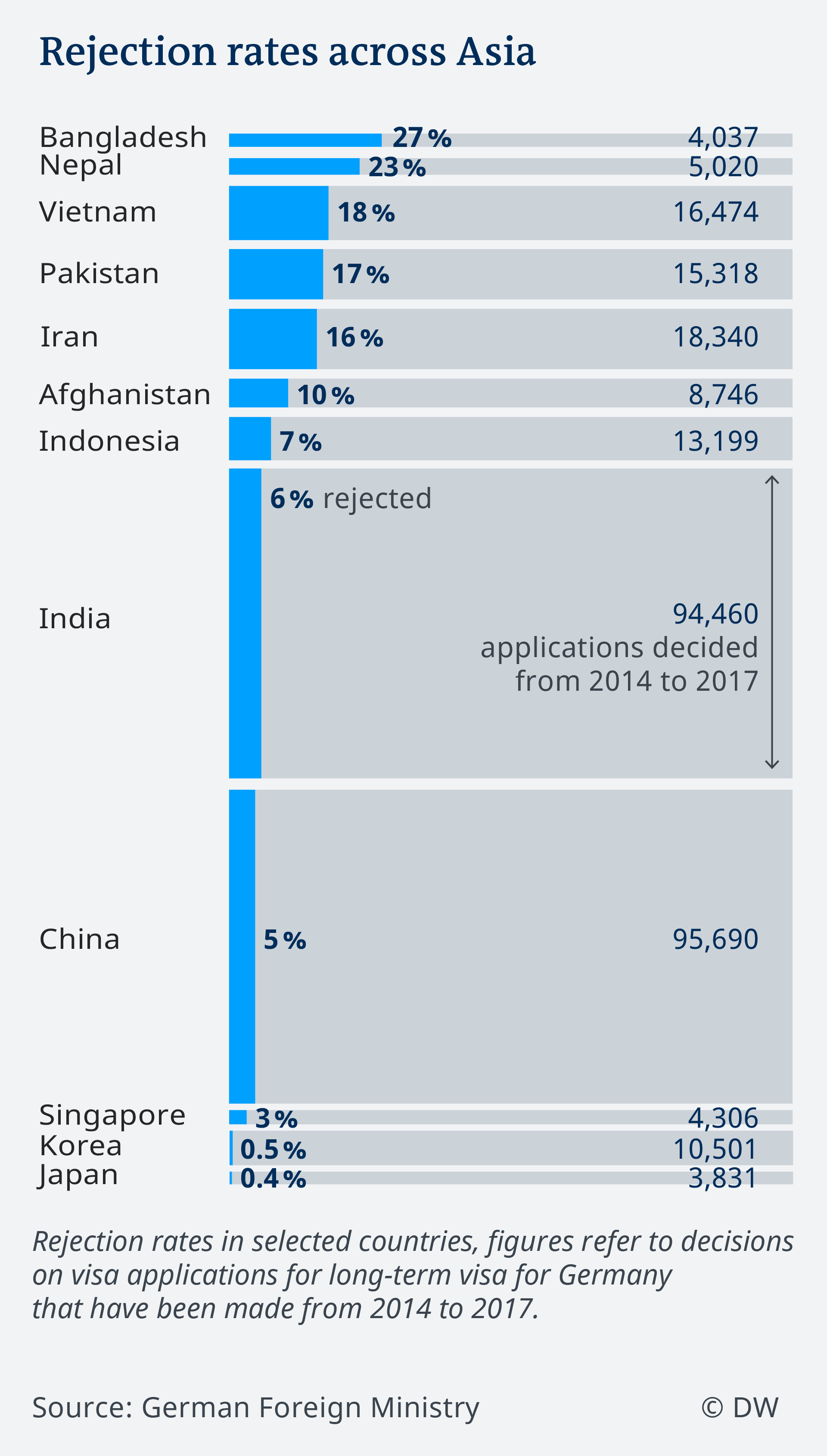 When asked about the role played by religion in the success rate of visa applications, i.e. whether Muslims are more likely to be rejected than Buddhists, Oltmer said: "I don't think an individual's religious affiliation plays a decisive role. It always depends on how a country's religiosity is viewed in Germany."

The expert refers to Indonesia, home to the world's largest Muslim population numbering over 200 million. But Indonesians are widely regarded as practicing a moderate form of Islam, which is probably a reason that explains its comparatively low visa rejection rate.

Irrespective of religion, there are other factors at play with regard to determining the fate of a visa application. Ester Sianturi, for instance, applied for a long-term visa from Indonesia in early 2016 as she wanted to work as an au pair in Germany.

"I signed up for the au pair program. I brought all my school certificates, A1 German language certificate and a guarantee letter from the parents of the child stating that I will take care of her for a year as an au pair in Germany. All the documents were complete. But a few days after submission, my application was rejected," said Ester, who comes from Medan in North Sumatra province. "I was so sad and deeply disappointed, as I put a lot of effort into this au pair program."

She then received a letter from the embassy explaining the reason for the rejection. "The parents of the child I was going to take care of were a German and Indonesian couple. The requirement of the au pair program is living with a host family whose citizenship is different to mine," Ester told DW.

Ester initially appealed the embassy's decision, without success. Six months after the rejection, she was allowed to submit a new application. This time round, Ester managed to find a host family where both parents of the child are German nationals. As a result, her application was successful the second time.

What the DW investigation clearly reveals is that the possibility to even apply for a visa varies considerably from country to country. Oltmer points out that the number of applications from Afghanistan — at 9,000 over the past three years — has been very low, given that at the end of 2016 about 250,000 Afghans lived in Germany, most of them as asylum seekers.

The fragile security situation in the war-ravaged South Asian country, coupled with the lack of financial resources of most Afghans to get to a German consulate or to the embassy in Kabul, are often cited as the reasons for this low number of visa applications from Afghanistan.

The capacity of the embassies and consulates to process the visa applications also has an impact on migration. A big consulate with many employees can handle a higher number of applications than a small one with relatively fewer staff.

Oltmer, however, rejects the idea that this could be a means to control migration, arguing that a country's economic, political and security situation play a far more decisive role, in addition to whether or not Germany actually has an interest in migration from that particular country.

Interactive datatable to explore the data yourself