Opinion: Putin, Kremlin were unprepared for a US-EU assault

The United States and its allies have decided to give Russian President Vladimir Putin a taste of his own medicine. It seems that the Kremlin is unprepared, the Russian journalist Konstantin Eggert writes. 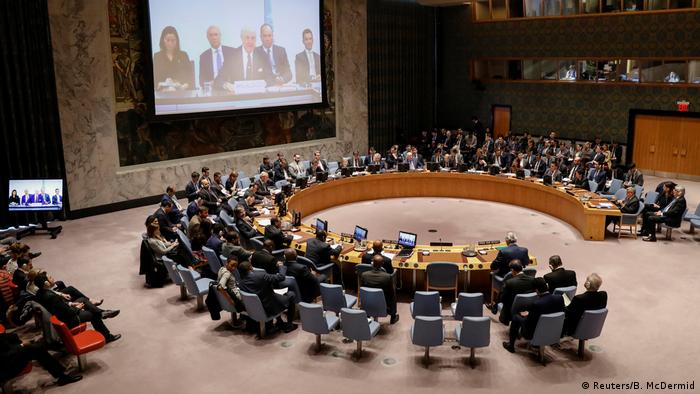 It was anything but dull in the Security Council on Monday, when Russian UN Ambassador Vasily Nebenzya faced off with his US and UK counterparts, Nikki Haley and Karen Pierce, respectively, and the representatives from Sweden, the Netherlands and Poland. There was a surprising reversal of roles in the discussion of Saturday's suspected chemical weapons attack by Syrian government forces in the town of Douma: The United States and its EU allies pummeled Nebenzya with the rhetorical abandon that had always been the trademark of Russian diplomats.

The drama at the United Nations unfolded hours after the collapse of Moscow's stock exchange. Shares of Russia's state-owned enterprises and financial institutions such as Sberbank, as well as assets owned by the Kremlin-friendly billionaire Oleg Deripaska, took a nosedive. According to various estimates, the capitalization of companies belonging to Russian oligarchs fell by $12-16 billion (€9.7-13 billion) within a few hours. The ruble also took a plunge, losing about 10 percent of its value.

This was the result of the US Department of Treasury's decision on Friday to publish a new list of Russian individuals and companies to be punished under the Countering America's Adversaries Through Sanctions Act. The new sanctions struck Russian President Vladimir Putin's inner circle much harder than previous rounds had. Apart from Deripaska and Gazprom supremo Alexei Miller, the individuals targeted include Putin's former aide-de-camp Alexei Dyumin (who is considered in Moscow to be a rising political star and candidate for defense minister) as well as another billionaire, Kirill Shamalov, rumored to be Putin's (former) son-in-law. Miller put on a brave face in public. The sanctions mean that "we are doing everything right," he said. This is the standard party line expected from the Kremlin's top loyalists in moments like these.

Behind the bravado, however, is confusion — hence Putin's conspicuous silence on the day when the Russian stocks fell, together with the national currency, and the fate of Moscow's key Middle Eastern partner, Syria, hung by a thread. His spokesman Dmitry Peskov said only two things: that the Russian state would find ways to support the stricken oligarchs and that US President Donald Trump was wrong to call the Syrian dictator a "beast." Considering the circumstances, that wasn't much.

The Kremlin has little with which to counter the massive diplomatic and economic offensive undertaken by Washington and its allies. Just over two months ago, Russian ministers, puppet Duma deputies and pocket propagandists laughed at the "Kremlin list" unveiled in late January by the US Treasury. These stupid Americans just copy-pasted the Moscow telephone directory, they quipped. It turned out that they laughed prematurely.

The list turned out to be akin to a suspended execution roll call. The "condemned" are chosen, lottery-style, according to rules known only to the White House. In Washington, these days there are few if any who will defend Russia. What's more, Trump's real feelings for Putin, warm as they may be, are completely irrelevant in such an atmosphere.

The Americans, the British and their allies have begun to deploy the same weapons that the Kremlin had so successfully used against them for years: deny everything, be rude publicly and hit hard where it hurts. In the case of Russia's ruling class, that is assets and freedom to travel. Together with the ruble, the last bit of trust between Moscow and key Western capitals has finally collapsed. When Emmanuel Macron goes to the annual international economic forum in St. Petersburg, he will come not to support the Russian leadership, but to inquire if it is willing to change its international behavior.

I am certain that the French president will get a firm "nyet" for an answer. Putin will not retreat. One of the ideological gurus of the Kremlin, Putin's assistant Vladislav Surkov, has already published a magazine piece titled "The Loneliness of the Half-Breed". Its thesis is simple: "Geopolitical loneliness is a normal state for Russia." The country does not need allies. Having seized Crimea from Ukraine in 2014, Moscow put an end to over 300 years of attempts to Westernize itself. And this, in the author's opinion, is normal, even good. Russia has finally become itself: not the West and not the East — namely the "half-breed."

But it is empty bravado akin to the rhetoric used by Miller, the Gazprom CEO. Neither the structure of Russia's economy nor the mood of its ruling elite have ever been so closely entangled with the West as they are today. And never since the end of World War II has the international standing of Russia's leadership been so low. Paraphrasing the famous joke of the late opposition leader Boris Nemtsov, you can only play Josef Stalin if you forsake Roman Abramovich's lifestyle. The people who rule and own Russia are not ready for this. Vladimir Putin, perhaps, will complete his fourth term in the Kremlin. But the triumph of his March 18 "re-election" is now hopelessly spoiled by the events of recent weeks.

Iraq: 11 villagers killed in 'IS' attack 3h ago