The ruble has experienced its biggest one-day fall for over two years and stocks in major Russian companies also slid, as investors reacted to a new round of US sanctions targeting some of Russia's biggest tycoons. 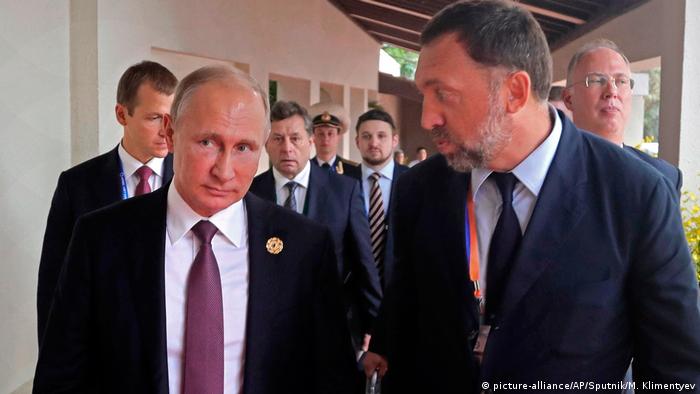 The fresh US sanctions announced on Friday, targeting officials and businesspeople around President Vladimir Putin, sent Moscow-traded stocks down to their lowest level since March 2014, at the height of the Crimea conflict. The country's currency plunged 3.39 percent, to its lowest level since November last year — the biggest percentage fall in a single day since January 2016.

Companies owned by Russian billionaire Oleg Deripaska warned that US sanctions against his Russian aluminum and energy empire would have a "materially adverse impact" on future business prospects, and could result in technical credit defaults.

"We haven't seen such a united, mass retreat from Russian assets for a long time," said Kirill Tremasov, director of the analysis department at investment company Loko-Invest in Moscow.

While Russian companies have faced a slew of sanctions since the conflict with Ukraine, the latest penalties are markedly more damaging. For the first time, major publicly traded Russian companies with global clients are on the black list. The sanctions are designed to stop these companies from doing business in US dollars, and cut them off from any dealings with US citizens.

A new provision also expands those rules to transactions involving non-Americans, which is already causing investment partners to pull out to reduce exposure.

The Swiss engineering company Sulzer decided to buy back 5 million of its own shares from Renova Group at an emergency board meeting on Sunday, to reduce Renova's holding to below 49 percent. Viktor Vekselberg, Renova's Russian chairman, is included on the sanctions list.

Though Russian gas giant Gazprom was not sanctioned, Alexei Miller, its chief executive, is also on the US list. That could create complicated legal dilemmas for Gazprom's many foreign partner companies.

On Monday, the sell-off also drove the shares of London-listed holding company EN+ down by nearly a third. Sberbank and Norilsk Nickel also fell sharply, despite not being targeted by the sanctions.

"Rusal will probably have to be bailed out by Russian state banks," analysts at TS Lombard wrote, adding that Deripaska may also be forced to sell his stake in Norilsk Nickel.

Prime Minister Dmitry Medvedev ordered his cabinet to come up with ways to assist the affected companies and draft possible retaliatory measures, but provided no details.

Kremlin spokesman Dmitry Peskov said Moscow was watching events on the markets closely, but an assessment of the impact of the sanctions would take time.

"The situation is pretty egregious from the point of view of legality. It tramples on all kinds of norms, and so a thorough analysis is necessary," Peskov said.

Moscow has been under mounting pressure in the past few weeks, since the UK accused the Kremlin, without providing direct evidence of its culpability, of poisoning a Russian ex-spy on British soil. In retaliation, London and its allies have announced a slew of measures, including coordinated expulsions of more than 150 Russian diplomats.

The new sanctions also coincide with a worsening of tensions between Russia and the US over the war in Syria, after an alleged chemical attack outside Damascus April 7. US President Donald Trump warned of a "big price to pay," pointing the finger at Putin and Iran as being "responsible for backing Animal Assad."