Leading European Union interior ministers have reached a deal on redistributing migrants rescued in the Mediterranean. It's a small sign of progress for a deadlocked EU, says Bernd Riegert. 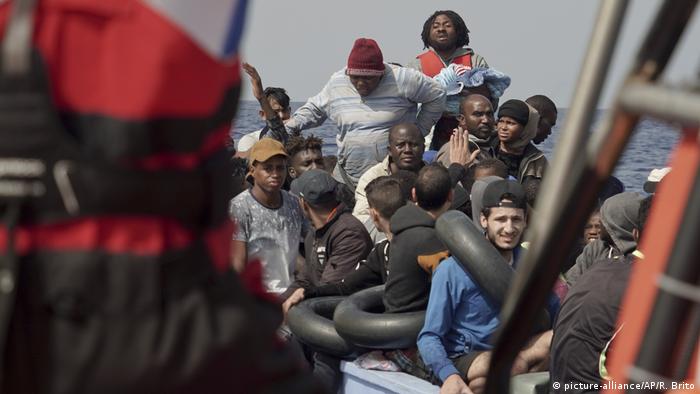 At last, a small step has been made in the right direction in Malta.

After four years of constant bickering about the bloc's migration policies, key EU leaders were able to reach an agreement on how to deal with migrants who cross the Mediterranean to reach Europe.

But not everyone is in agreement — at least not yet. Only the core states of France, Germany and Italy, along with Malta, were involved in drafting the distribution plan for migrants and asylum-seekers on Monday. For the plan to work in the long term, obstinate, anti-migrant EU members will have to toe the line as well.

In early October, the proposed plan will be formally discussed at a full meeting of the EU's 28 interior ministers. But even optimists aren't expecting more than half of the member states to sign a binding distribution mechanism. The rest will continue to hide behind Hungary and Poland, whose nationalistic governments continue to stubbornly — and illegally — refuse to accept migrants or refugees.

But now, with a moderate populist government at the helm in Italy, a change of course seems possible. As soon as a concrete distribution plan is in place, Italy's new independent interior minister, Luciana Lamorgese, has said she will reopen Italian ports to private rescue ships. Her radical right-wing predecessor, Matteo Salvini, saw himself as the country's savior for his hard-line, inhumane policies that impeded or prevented those stranded at sea from landing in Italy.

Turning point in Rome and Berlin

German Interior Minister Horst Seehofer, who just a year ago was still open to negotiating with Salvini, realized that it couldn't go on like this, that his former Italian ally had drifted too far to the right.

The current EU approach — which seeks to scare away, outsource and deport — has reached its limits. Every weekend, leaders across Europe are tied up in conference calls, haggling over the fate of a fresh boatload of people. It's shameful, and undignified.

Seehofer has now seized the chance of a new government in Rome to extricate himself from the current impasse on migration policy. Even if he hasn't said so, his approach has changed drastically: All of a sudden, he is now prepared for Germany to accept a fixed quota of migrants arriving from African countries over the Mediterranean.

Of course, this quota will initially only apply to those saved in the Mediterranean by private rescue organizations, including three German ones. That is by far the smallest proportion of all migrants who come to Europe — in 2018, that was only 2,200 people. Today, most migrants avoid Italy and Malta, instead heading straight for Greece or Spain.

Proponents of Salvini's hard-line approach have argued that it had a strong deterrent effect, both on migrants and human smugglers. What will happen if quotas are put into place? Will it lead to an increase in people willing to risk the life-threatening sea crossing? Will more drown because not everyone can be saved?  Will the EU be forced to organize another official sea rescue operation to save migrants from the smugglers' boats?

The interior ministers in Malta, who rightly want to move ahead with their plan, have still not answered these questions. But at some point, these issues must be addressed.

At the meeting in October, around 12 to 15 EU states will need to be convinced to participate in the proposed migrant redistribution mechanism. In order for the plan to succeed, it must be clear that those who refuse to accept any migrants will at least have to contribute funds, or show some other form of solidarity — but for the moment, that likely remains a long shot.

Currently, the plan is for Germany to take 25% of the migrants, France another 25% and Italy 10%. But who will take the remaining 40%? Does working this out really have to be so complicated? When it comes down to actual numbers, it only amounts to a few dozen people per year!

A long-term solution for the tens of thousands of migrants who reach Europe by land — or even a fundamental reform of the European asylum system — is still a long way off.