The humanitarian NGO has accused the EU of deliberately allowing tense standoffs over migrants at Mediterranean ports to deter ships from rescuing people. Sea-Watch captain Carola Rackete is under house arrest in Italy. 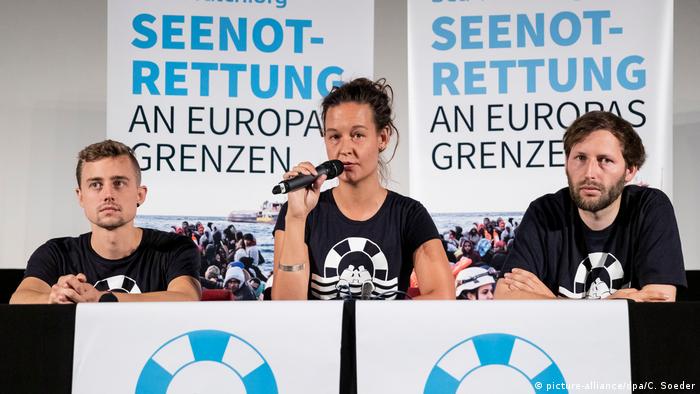 Three representatives of German rescue organization Sea-Watch accused the German government and the European Union of hypocrisy for their support for Carola Rackete, the captain of their ship, Sea-Watch 3.

The ship, which was used to rescue 53 stricken migrants, was impounded by Italian authorities on the island of Lampedusa, while Rackete was released late on Tuesday, after having spent three days under house arrest.

"It is truly, truly shameful," spokesperson Ruben Neugebauer told reporters at an emotionally-charged press conference in Berlin earlier on Tuesday, before Rackete's release. They pointed out that Italy had closed its ports to humanitarian rescue vessels a year ago, causing several standoffs with local authorities.

"Since then, the European Union and the German government have had time to find a solution to the situation, but they always find a way to talk themselves out of it," he said. "They're very good at making excuses, pointing the finger at others … and saying 'we need a European solution.'" He said a European solution "would be nice," but until there is one, individual countries need to take responsibility.

Sea-Watch praised the initiative taken by over 60 German towns and local councils, who have offered to take in the refugees that Sea-Watch 3 rescued. This shows "what solidarity looks like," said Neugebauer.

Read more: What you need to know about the Sea-Watch rescuers

On Monday, German Foreign Minister Heiko Maas tweeted: "From our point of view, any legal process can only end with the release of Carola Rackete. I will make that clear to Italy once again. At a European level: The haggling over the distribution of migrants is undignified and must end."

But Sea-Watch said the German government and other EU states carry "just as much" blame for the 16-day standoff as right-wing Interior Minister Matteo Salvini, who has imposed Italy's hard-line stance.

Wolfgang Schäuble, German parliamentary president and a member of Chancellor Angela Merkel's Christian Democratic Union (CDU), took an ambiguous line, telling the Bild newspaper, "No one can seriously dispute that you have to rescue people in danger at sea." But he added that rescue organizations like Sea-Watch should "avoid wrong signals and discuss self-critically whether they aren't supporting the business of traffickers."

But Sea-Watch says that the EU's current strategy against human traffickers (supporting the Libyan coastguard to stop boats leaving its shores), actually ends up financing traffickers.

According to the organization, there is evidence that Libya's coastguards are run by the country's militias, who in some cases also operate people-smuggling networks. A Human Rights Watch report from January this year also said that "EU policies contribute to the abuse of migrants in Libya."

"If anything is human trafficking, then surely it's paying militias to pick up people from the open sea and taking them back to a country where they're threatened with persecution or slavery, or rape or torture, in complete violation of the UN convention on refugees," said Sea-Watch spokesperson Chris Grodotzki.

"This is a continent of more than 500 million people, who for over two weeks cannot manage to distribute 50 refugees across the continent," said his colleague Neugebauer. "It's absurd. But it's not just a lack of will; our impression is that the signal that these standoffs have is deliberate."

In June, the UK's Guardian newspaper and other media outlets reported that Sea-Watch 3 was the last rescue boat still operating in the Mediterranean. The effect of standoffs such as the one over Sea-Watch 3, the organization argued, was that trading ships and fishermen who happen to see stricken vessels carrying migrants "think twice" before rescuing them.

Tension, despair, and suicide threats on board

Having been on board a vessel during a previous standoff, which occurred in January off the coast of Malta, Grodotzki described how conditions on the ship can worsen, with refugees sinking into despair. "These people come out of Libyan prisons ... where they are illegally locked up, and potentially tortured, raped, or sold as slaves," he explained.

Grodotzki said that the usual procedure on board is for the crew and the refugees to hold a meeting every morning. "So every morning they tell them exactly the same thing: Yes, we will bring you to a safe harbor, but we don't know when or how," he said.

"On a ship like this, you are dependent on everyone working together, but as soon as people on board lose hope, they lose trust in the crew," Grodotzki said. "As soon as that happens, you have a powder keg on board. We heard from our captain that this was the case on board the Sea-Watch 3. She was scared that people would hurt themselves, that they might even kill themselves."

He said that the Sea-Watch's 22-person crew had to set up round-the-clock suicide watches on board. "And the crew was exhausted too," he added.

The search-and-rescue ship Aquarius saved nearly 300 people in the Mediterranean Sea over Easter. European maritime authorities prevented the NGO workers from rescuing 80-90 men during one operation. (23.04.2018)