French President Emmanuel Macron picked up the gauntlet thrown down by Viktor Orban and Matteo Salvini. He's right to do so since strength is the right, and only, response to right-wing populists, says DW's Max Hofmann. 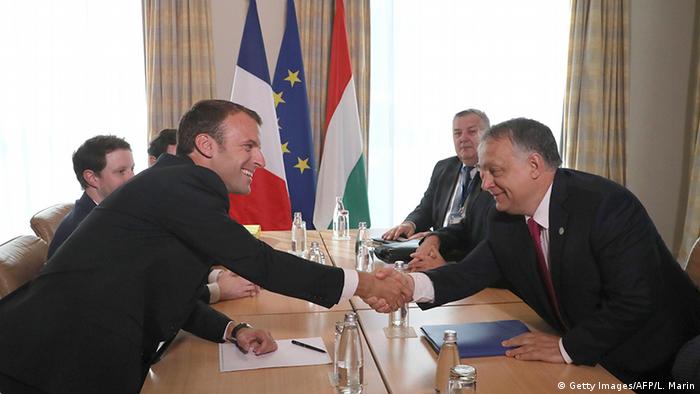 France's Emmanuel Macron stands at the helm of the group that "supports immigration," according to Hungarian Prime Minister Viktor Orban. He and Italy's interior minister, Matteo Salvini, on the other hand, are the ones who wanted to "end illegal immigration."

This is just nonsense. France also wants to stop illegal migration, and Macron, through his much-criticized stance on immigrants at home, has shown himself to be anything but a supporter of immigration. But — at least for now — the fronts are clear in what could be the final battle over the topic that has come to dominate the era. At least we can all hope it comes to an end.

Counter harshness with the same

In one corner are the "illegal immigration terminators." That's to say, the right-wing populists tinkering with illiberal democracy in their own countries. In the other corner stand the "immigration supporters." People like Macron, who one might call the true democrats of Europe. The people who understand that compromises are necessary to move the European Union forward. Big mouths might help win over voters, but they rarely help in solving problems.

Speaking of big mouths, Orban and Salvini keep presenting themselves as the latest dream team fighting for the right-wing populist saviors of the West. If it weren't so sad, this would actually make anyone laugh out loud. The two are united only by their uncompromising, rabid and hateful style. On the matter at hand, however, they have different goals. Salvini wants other EU countries to accept migrants from Italy, taking a position closer to German Chancellor Angela Merkel's than to the Hungarian prime minister's. Orban does not want to accept any migrants. Instead, he wants to send them back to their countries of origin. This cleft could collapse the populist alliance — and the French president is betting on it.

But for the far-right coalition to fall, someone finally has to start turning the heat up on the populists. So far, the rest of the EU is letting Lega Nord, AfD, Fidesz and others steer the course. Fearing their success, some long-established parties have even taken to copying the style of these single-issueparties. That's the wrong direction! The right course, the one Macron is now taking, is to face down callousness without giving in and without apologizing for pro-European positions. These are the tactics the young French president has already used to devastate a right-wing populist adversary in his own country, Marine Le Pen.

Expose the incompetence and contradictions

The largely silent majority of Europeans needs someone to take the lead. Someone who fights for the values that have created prosperity and peace in the European Union. Someone who is willing to engage in abattle of ideas with straight talk. Despite all the problems currently besetting him in France, this person is Emmanuel Macron.

"I will not give way to the nationalists and those who support hate speech," Macron said during a visit to Denmark. "And if they want to see me as their primary enemy, then they are right."

Beliefs that are so powerfully and fearlessly presented have the potential to unite people and to give them a voice. They have the power to expose the flimsily concealed differences among the various populist parties and show Europeans that Salvini & Co don't have much to offer. They have little idea of constructivegovernance — as the current Italian coalition's first three months in office have shown. Ideas on how to tackle problems like unemployment, climate change and poverty? They don't have those either.

The European elections are coming next year. Macron knows that the future of the EU depends on a majority of Europeans clearly recognizing the incompetence and contradictions of right-wing populists. So he's ready to fight this decisive battle.

Opinion: With Emmanuel Macron, the EU still has a chance

In his acceptance speech for the Charlemagne Prize, French President Emmanuel Macron urged the European Union to make reforms. We cannot lose any more time in implementing them, says DW's Bernd Riegert. (10.05.2018)

The French ambassador to Hungary, Eric Fournier, came under fire after the publication of pro-Orban comments. He has been replaced, although there is some confusion about the timeline. (02.07.2018)

US, South Korea seek to bolster military ties amid regional tensions 4h ago

Opinion: Mariupol — a symbol of Ukrainian courage and Russian shame 6h ago