Hungary and Italy have pledged to forge a new alliance to change the way the EU deals with migration. Orban and Salvini have repeatedly defied the European Union by refusing to take in any further asylum-seekers. 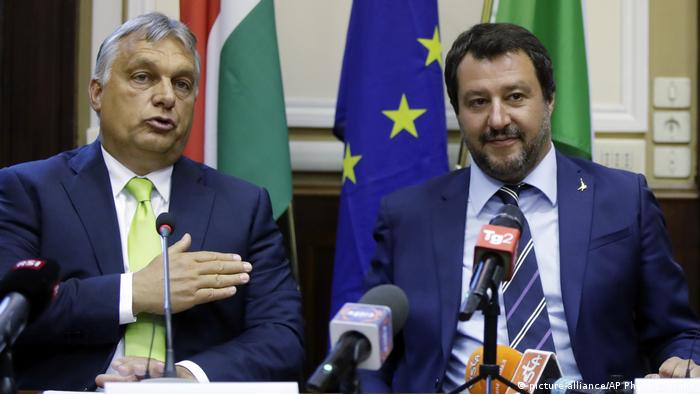 Hungarian Prime Minister Viktor Orban and Italian Interior Minister Matteo Salvini made no secret of their mutual admiration ahead of their meeting in Milan on Tuesday.

United in their anti-immigration policies and relentless bashing of the EU, the two right-wing lawmakers called for the creation of a pan-European anti-migrant alliance that would seek to prevent migration to Europe from besieged regions in Africa and the Middle East.

Salvini, who heads the far-right League party, the junior partner in Italy's populist coalition, told reporters that Italy and Hungary would strive to forge a future union "that excludes socialists and the left, that brings back to the center the values and identity" that their parties represent.

"We are near a historic change on a continental level," Salvini added.

What Hungary does on land, Italy does by sea

Orban described Salvini as his "hero and companion" for turning away migrant rescue ships, claiming that such actions were crucial for Europe's security.

Since coming to power, the Italian government has prevented several migrant rescue boats from docking in the south of the country. In June, Italy refused to allow the Aquarius boat to dock in Sicily. After several days in limbo, Spain eventually agreed to welcome the 630 migrants on board. Most recently, the Diciotti rescue shipped was docked in the Sicilian city of Catania for almost a week before the 180 migrants on board were finally allowed to disembark. However, Salvini demanded that they immediately be taken in by other EU countries.

Hungary, meanwhile, has erected a barbed wire fence along its borders with Croatia and Serbia to prevent mainly Middle Eastern refugees from crossing the so-called Balkan route into central Europe. Orban has also refused to take part in the EU's migrant quota scheme.

Around one thousand demonstrators gathered on the streets of Milan to protest Orban's visit on Tuesday. "We do not want Orban's vison of Europe," Socialist MEP Emanuele Fiano said. "Orban calls himself Salvini's friend, but when it comes to taking in refugees from war-town countries, he slams the door."

Salvini also indicated that his government was close to reaching an agreement with Germany over the repatriation of migrants from the German-Austrian border back down to Italy.

However, any deal would hinge on Italy "not taking in anymore migrants," the League leader said.

On Saturday, Salvini's German counterpart, Horst Seehofer, said that Italy would only agree to take back as many migrants and Germany accepts from Italian ports. IN return, Salvini had vowed "to participate in migrant sea rescue missions on a similar scale to Germany, Seehofer said, without giving more details. Germany has already struck similar deals with Spain and Greece.

Interior Minister Matteo Salvini is reportedly being probed for his role in preventing migrants rescued at sea from disembarking in Sicily. Meanwhile, a deal has been reached to allow the migrants to leave the ship. (25.08.2018)