Italy was at loggerheads with EU states during a meeting it had hoped would solve its ongoing migration woes. Italy's prime minister said there will be consequences if the bloc doesn't help take in 150 migrants. 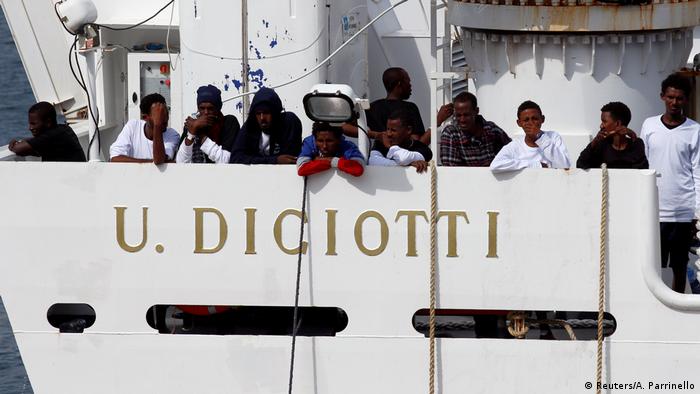 The Italian deputy prime minister's threats to withhold European Union payments appeared to have little effect on Friday, as a meeting with EU states in Brussels to address Italy's migration woes ended with no solution.

Luigi Di Maio had said that Italy might stop making payments to the EU if the bloc did not assist in taking in 150 migrants on board the Ubaldo Diciotti rescue ship in the Sicilian port of Catania.

"Italy was pressing to come up with a solution for Diciotti," Reuters reported one diplomat as saying. "But it was not the most important element for the others — they wanted to talk more about structural solutions for the Mediterranean ships, so there has not been a deal on Diciotti."

Italian Prime Minister Giuseppe Conte accused EU states of "hypocrisy" after they failed to offer a solution to the migrant stand-off, and said it would have repercussions for Italy's stance on other issues.

Conte said in a Facebook post that Europe had failed to show solidarity or responsibility and condemned the gap between words and actions "which sometimes mutates into hypocrisy."

Italy's Interior Minister Matteo Salvini on Thursday allowed the 27 minors on board the Diciotti ship to disembark, but said the remaing 150 migrants would not be allowed onshore. They have been on the vessel for nine days.

In a Thursday evening interview on Italian TV, which the minister also posted on his Facebook account, Di Maio had said he would take a "hard line" on EU payments at the meeting.

"In recent months we have had the chance to see how a soft line with the European Union worked and how a hard line works," said Di Maio.

"If tomorrow [Friday] nothing comes out of the European Commission meeting, if they decide nothing regarding the Diciotti and the redistribution of the migrants, I and the whole Five Star Movement will no longer be prepared to give €20 billion euros ($23.1 billion) to the European Union every year."

Meanwhile, Italy's Interior Minister Matteo Salvini dismissed reports on Friday that the 150 migrants had started a hunger strike. "They can do whatever they believe," Salvini tweeted, adding that some 5 million people in Italy were living in poverty and going without food every day.

The European Commission said earlier on Friday that it would follow the rules governing migration, rather than give in to threats.

"Finding a solution for the people on board is our main priority. That is what we are focused on and that is what we think everybody else should be focused on," Commission spokesman Alexander Winterstein told a news conference. "Let's not engage in finger-pointing. We also believe unconstructive comments, let alone threats, are not helpful and will not get us any closer to a solution. The European Union is a community of rules and it operates on the basis of rules, not threats."

The Diciotti was given permission to dock at Catania following a standoff with Malta, which refused to let the vessel dock at its port.

Italy has appealed to EU states, including Germany, to take in some of the migrants. So far, Hungary has responded and refused to accept any.

Salvini is due to meet Hungarian Prime Minister Viktor Orban in Milan on August 28. In an earlier interview with the Corriere della Sera daily, Salvini said he wanted to discuss ways to put a "stop to immigration" in the European Union with Orban and other officials.

Larry King: Legendary US TV host dead at 87 54m ago