By refusing entry to migrant rescue ship, Italy and Malta reveal legal shortcomings | Europe | News and current affairs from around the continent | DW | 12.06.2018

Italy’s closure of its ports to a ship carrying migrants rescued at sea may be controversial, but is it illegal? The case is renewing calls for a unified European stance on migrants. 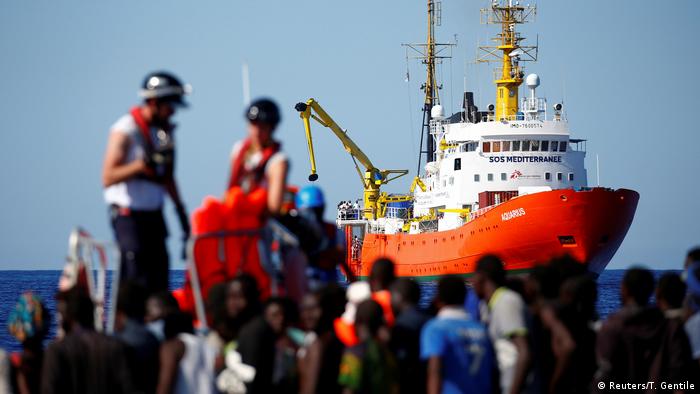 Italy's new right-wing populist interior minister, Matteo Salvini, campaigned on an anti-immigrant platform. Now, he's made good on his election promise by forbidding a ship carrying refugees to dock in an Italian port. On Sunday, the MS Aquarius, which is operated by French-German charity SOS Mediterranee and has Doctors Without Borders (MSF) staff aboard, rescued 629 migrants from the Mediterranean – among them over 100 children. Salvini insisted that Malta allow the ship to dock – a demand the Maltese government rejected. After two days at sea, Spain agreed to accept the refugees, although it is still unclear where exactly they will disembark. 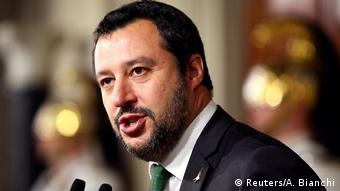 Who is legally responsible for refugees?

The United Nations Convention on the Law of the Sea (UNCLOS) stipulates that captains are obliged to rescue anyone in distress at sea. But the law is not clear on what happens after the shipwrecked are in safety, said Stefan Talmon, a law professor at the University of Bonn. The UNCLOS says little about shipwrecked migrants in particular.

The Mediterranean, just like any other sea, is divided into various search and rescue zones, for which individual states carry responsibility. Depending on the zone from where a distress signal is sent, the respective state is required to coordinate a rescue operation. But, as Talmon says, that's where the legal obligations end. "This is a legal lacuna that has been known for years. Rescuing those in distress is obligatory. Taking them in is not."

This situation puts ship captains in an awkard situation. In the worst case, rescued migrants could be forced to stay aboard ships for days or weeks in international waters. Talmon recalls a situation in 2001 when a freighter saved over 400 Afghan migrants in the Indian Ocean. But when the ship reached Australian waters, Australia refused to let the refugees into the country. Other nations similarly refused to let the ship disembark. Then, after several days had passed, the freighter was directed to the island country of Nauru, where Australia runs a controversial refugee detention center.

Revising the UNCLOS is difficult. "Many states like Australia or the US do not want to be legally obliged to take in shipwrecked migrants," said Talmon, adding that there is also disagreement over whether they must even be brought to a port.

The law merely stipulates that rescued individuals must be brought to a "safe place," Talmon said. Whether that means bringing them to land, to a larger ship or an inflatable life raft, is not clearly defined. Talmon says non-EU ports in the Mediterranean, for instance in Tunisia and Egypt, also count as safe places. What's more, rescue ships operating in international waters do not fall under the jurisdiction of any states, meaning that, for example, the European Convention on Human Rights does not apply. This, too, is a legal lacuna.

Pierre Vimont, a former EU diplomat, is not surprised by the spat between Italy's new government and other EU members over the rescued migrants. Vimont is a senior fellow at Carnegie Europe, where he analyses European affairs. "Closing Italy's borders to migrants was Matteo Salvini's biggest election promise," he said. By refusing rescue ships permission to dock in Italian ports, Salvini is putting enormous pressure on other EU members. "This time, Malta was under immense pressure. Next time, it might be Cyprus or Greece finding themselves in that situation," Vimont said.

EU-wide solution on the cards?

Salvini's tough stance could lend impetus to debates over reforming European asylum laws. As the pressure increases, says Vimont, there may be a growing willingness to reach a compromise. He thinks a future solution should focus on assisting EU members along the bloc's external borders to take some of the pressure off countries such as Italy, Greece and Bulgaria.

What form that assistance would take depends on EU member states themselves. In 2016, the European Commission made numerous suggestions of possible steps to take. So far, none have been implemented. One idea that has been floated involves having states which are unwilling to take in migrants provide financial assistance to those that do. Vimont says fostering African development projects could also help. He is adamant that the onus is now on large EU members such as France and the UK, who have so far have taken in few migrants.

Vimont is optimistic that a compromise could soon be reached. He does not believe the recent electoral successes of right-wing and nationalist parties in Europe pose an obstacle. He says even Hungary's Prime Minister Victor Orban, who has vehemently refused to admit migrants into his country, has signaled he may be willing to fund those member states that do.

While Italy and the remaining EU members continue to debate how best to deal with migration, many migrants have already adapted and changed their routes, said Vimont. Now, they are heading towards Spain, which he says is deemed a more "realistic destination." In the last few months, there has been a rise in the number of migrants arriving on the country's shores. The offer by Spain's new pro-European government to permit the MS Aquarius to dock is a gesture of goodwill, according to Vimont. He thinks there will nevertheless be added momentum to find a common European stance on refugees in the weeks and months to come.

The leaders of the "Southern Seven" met in Rome to discuss multiple problems facing the European Union. Migration was high on the agenda for many of the countries on the front lines of the recent migration crisis. (11.01.2018)