The leaders of the "Southern Seven" met in Rome to discuss multiple problems facing the European Union. Migration was high on the agenda for many of the countries on the front lines of the recent migration crisis. 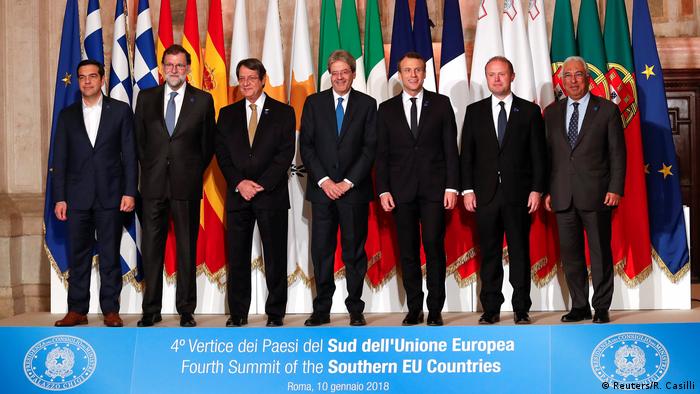 Seven European Union (EU) countries bordering the Mediterranean on Wednesday called for improvements to the bloc's common migration policy and making the union more responsive to its citizens.

The leaders of Cyprus, France, Greece, Italy, Malta, Portugal and Spain — known collectively as the "Southern Seven" — released a joint statement following a meeting in Rome saying they were "firmly committed to a common European policy on migration."

They agreed on the need to strengthen the EU's external border, tackle human smugglers and combat the sources of migration, such as poverty and conflict, in origin countries.

Leaders also suggested other member states needed to do more to help those countries that receive the most migrants.

"We must fight together to put in place a migration policy that shows solidarity with the countries that receive these significant flows," Greek Prime Minister Alexis Tsipras told reporters.

Greece, Italy and Spain have been the entry points for most migrants, asylum seekers and refugees trying to enter Europe from the Middle East and North Africa in recent years.

All three have struggled to cope with the large administrative and humanitarian burden. Greek authorities have been finding it difficult to process over 50,000 migrants, while Italy's last official statistics showed nearly 200,000 migrants living in reception centers.

They have repeatedly criticized other EU member states such as Poland and the Czech Republic for refusing or ignoring proposals to relocate migrants based on an EU-wide quota.

The seven leaders also discussed the future of the EU, agreeing the bloc should encourage citizens to voice their opinions on how the EU can improve.

"We welcome the idea of citizens' consultations, all over Europe, on core priorities for the future of the European Union that could be organized from next spring," the joint declaration said.

The seven leaders also welcomed France's proposal for citizens to vote for EU-wide party lists in the next European Parliamentary elections. Voters under the current system can only vote for national party lists.

As asylum-seekers occupy town plazas to protest detention in Lampedusa, locals on both sides of the migration debate are calling for removal of a hotspot there to protect tourism. Diego Cupolo reports from the island. (12.05.2016)