Meeting in Prague, right-wing leaders from across Europe have praised Austria's anti-immigration party joining the new coalition government. The politicians are seeking to build cooperation among populists. 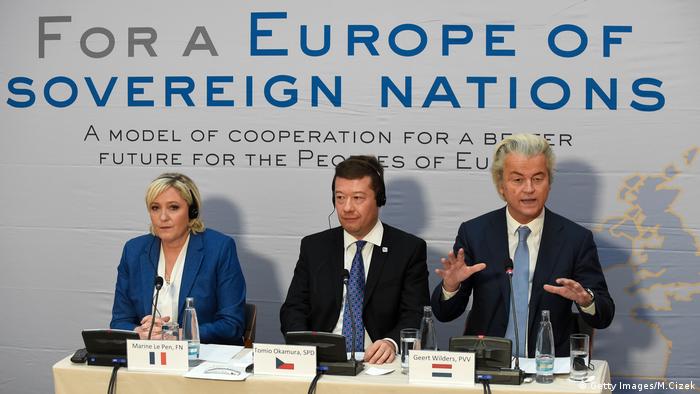 Meeting under the banner of the Movement for a Europe of Nations and Freedoms (MENL) the conference was hosted by Tomio Okamura, whose anti-Islam and anti-EU Freedom and Direct Democracy (SPD) party won 10.6 percent of the Czech vote in October's parliamentary elections.

"In Europe or in our country people should behave as European or he should leave," said Okamura, who was born in Japan to a Czech mother and Japanese-Korean father.  "We want a Europe which respects national individuality, national identity and freedom."

The European Parliament grouping brings together right-wing parties, including Marine Le Pen's National Front in France, the Freedom Party of Heinz-Christian Strache in Austria, Italy's Northern League and the Dutch Party for Freedom of Geert Wilders.

The Freedom Party picked up several cabinet posts including the interior, defense and foreign ministries.

Holland's Wilders called the Freedom Party's entry into the Austrian government a sign that a "sister party" in the European Parliament group was "being taken seriously."

Le Pen said it was "very good news for Europe" that the Freedom Party became the first right-wing populist party to enter government in the EU.

Le Pen insisted that none of the parties were xenophobic.

"We are in opposition to the European Union because we believe it is a catastrophically disastrous organization. Migration is close to being unbearable, our respected cultures are being destroyed. We like diversity. I like the Dutch to be Dutch, I like the Czech to be Czechs, I like the French to be French, I like the Italians to be Italian."

Poland, Hungary, Slovakia and the Czech Republic's refusal to accept EU migrant quotas have put them at odds with Brussels.

Okamura was able to tap into Czech fears by taking a hardline against immigration and Islam, even though the country has only taken in 12 refugees under the EU's migrant sharing scheme.

Saturday's meeting did not include the German far-right party Alternative for Germany (AfD).

However, former AfD member Marcus Pretzell did attend the meeting. He split from the AfD after the September election to join the Blue Party, founded by the former AfD co-chair who is also his wife, Frauke Petry.

The issue of migration is deepening the rift between east and west in the EU. But for a long time now, more fundamental issues such as legal integrity and solidarity have been at stake, says DW's Bernd Riegert. (15.12.2017)