Rome had threatened to return the 177 migrants to Libya amid a standoff with Malta over who should take them. Local media reports suggested it would take some negotiations before the migrants are allowed to disembark. 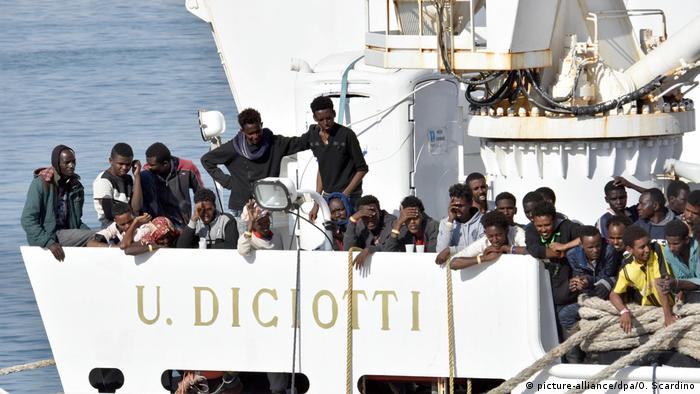 The Diciotti, working under the EU's Frontex Mediterranean rescue operation, had been stuck off the coast of the Italian island of Lampedusa amid a standoff between Italy and Malta over the fate of the migrants.

"The Diciotti ship will dock in Catania," Transport Minister Danilo Toninelli said on Twitter without specifying when. "Now Europe must hurry to do its part."

EU reaches out to members

The refusal prompted a sharp response from Italy's far-right interior minister, Matteo Salvini, who threatened to send the migrants to Libya and demanded the European Union step in.

Salvini retracted his threat later. However, sources close to Salvini said he would not allow the migrants to get off the boat until there was a "certainty the 177 would go somewhere else."

The European Commission said it was working on a solution to share out the migrants aboard the Diciotti with other EU members.

Since taking office in June, Salvini has toughened Rome's stance on allowing ships to dock in Italian ports at a time of rising anti-immigration sentiment in Italy.

A southern Italian mayor lauded globally for his approach to immigration was convicted on various corruption charges. Observers were shocked at the severity of the sentence.

A boat carrying over 100 people was forced to stay at sea for days looking for a port to dock at. They have now been allowed to land at a town in Sicily.