The threat comes amid a standoff with Malta over the fate of 177 migrants rescued by Italy in Maltese waters. Returning migrants to an "unsafe" Libya could pose legal troubles for Rome. 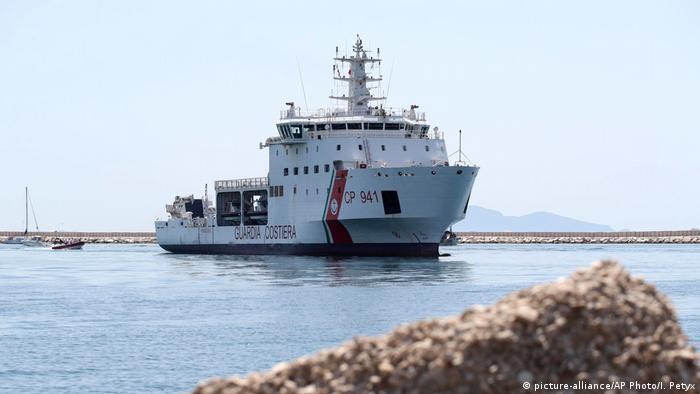 Italy's far-right interior minister on Sunday threatened to return to Libya 177 migrants who have been stuck on an Italian coast guard ship for days amid an ongoing standoff with Malta over their fate.

Interior Minister Matteo Salvini demanded the European Union step in after Malta refused to let the Diciotti ship dock at its port.

"Either Europe decides to seriously offer Italy some concrete help, beginning with, for example, the 180 immigrants on board the Diciotti ship, or we will be forced to do what will definitively stop the smugglers' business. That means taking the people saved in the sea back to Libya," Salvini said in a statement.

The Diciotti, working under the EU's Frontex Mediterranean rescue operation, has been stuck off the coast of the Italian island of Lampedusa after rescuing the migrants on August 16.

The spat between Italy and Malta is the second in just over a month. The two governments were locked in a standoff over 450 migrants rescued from a fishing ship. The migrants were taken aboard two EU border agency vessels, which were eventually allowed to dock in Italy after five European countries agreed to take 50 each.

Returning migrants to an "unsafe" Libya could pose legal troubles for Rome.

International law states that migrants rescued in international waters cannot be returned to a place where their lives are put in danger. Libya is classified as unsafe by both the United Nations and the European Union.

The UN refugee agency is looking into possible violations of international law by an Italian-flagged mercantile ship, which rescued more than 100 migrants and returned them to Libya in July.

Rome was faulted by the European Court of Human Rights in 2012 for using its own ships to return migrants to Libya.

ap/rc (AP, dpa, AFP)
Each evening at 1830 UTC, DW's editors send out a selection of the day's hard news and quality feature journalism. You can sign up to receive it directly here.

Data Analysis: Aid money alone will not be enough to stop the causes of migration

Is it possible to stop people from migrating by increasing financial aid to developing countries? Deutsche Welle research shows this may be effective in some cases. But aid money alone cannot stop major migration waves. (15.02.2018)

An NGO rescue ship and a merchant vessel are waiting to disembark more than 300 migrants rescued in the Mediterranean Sea. Malta and Italy have refused the Mission Lifeline rescue ship permission to dock. (24.06.2018)