Is it possible to stop people from migrating by increasing financial aid to developing countries? DW research shows this may be effective in some cases. But aid money alone cannot stop major migration waves. 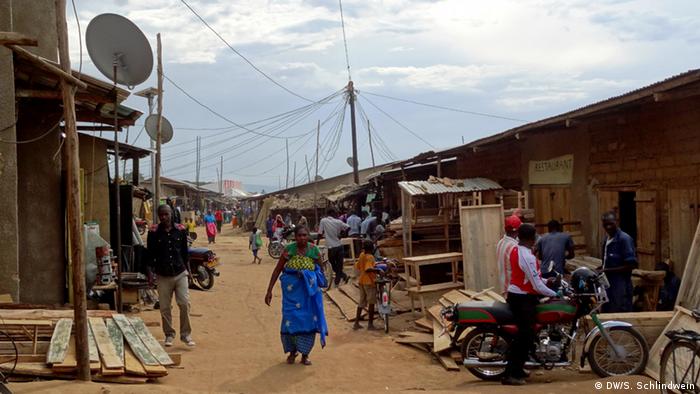 It wasn't too long ago that the images of Germans euphorically greeting asylum seekers at Munich's central station captured global attention. Angela Merkel’s refugee policy saw her chosen as TIME magazine’s Person of the Year in 2015. Other European countries also opened their borders to the needy and those hoping for a safe future. But that culture of welcoming refugees did not last long.

Two years on, and the situation is different. Political parties running on an anti-immigration platform, such as the Alternative for Germany (AfD), or France’s Front National, are gaining popularity in Europe. And even moderate politicians want to reduce immigration,arguing that the West cannot accept an unlimited number of people.

The European Union's strategy is to combat the causes of migration, in part through financial aid. Since 2015, the climax of the refugee crisis in Europe, the EU has allocated €3.2 billion ($40 billion) under the "EU Emergency Trust Fund for Africa"to tackle the causes of "irregular migration." But can this really work? The cautious answer is that it can.

This is particularly evident in East Africa, West Africa and the Caribbean, where the level of development aid that flowed into the country had a direct impact on the number of people who left their homes. DW’s analysis is based on a methodology developed by the economist Rainer Thiele from the Kiel Institute for the World Economy. According to Thiele, "If development aid is invested appropriately in the long-term, it can help people stay in their home country and establish something there."

Each point represents a three-year average amount of development aid received by an East African country, and the levels of emigration that that country is experiencing this year. The higher the level of development aid, the lower the emigration rate. The orange line shows the common trend across all points.

In principle, however, it is also possible for development aid to have adverse effects. For instance, if development aid only leads to people in the country having a higher income, it actually boosts emigration. The reason for this is that more people can afford to emigrate. There is only a reverse in this trend once average incomes approach the level of industrialized countries. At this point, more people remain in their home countries, or migrants return. Economists call this phenomenon the "migration hump."

But there is another form of development aid which has increased, especially in recent years. Instead of simply spreading the money widely, it is invested primarily in social services. And this can, in the short-term, actually reduce the desire to emigrate, says Thiele. In concrete terms this means, for example, hospitals are given more X-ray equipment and beds, or schools receive more books and teachers.

Ethiopia is a positive example of this kind of successful development policy. It is the African country that received the most development aid from EU countries and institutions in 2015, with a total of around €830 million ($987 million). According to Thiele, massive investments have been made in the social sector to improve medical care and education. In addition, decisive action is being taken to fight corruption. As a result, the country is doing better, people are seeing a long-term perspective and emigration is gradually declining.

Neighboring Eritrea, on the other hand, is an example of the exact opposite. Since the mid-2000s, development aid has been steadily declining, which seems to have exacerbated existing problems. For some time now, experts have described the country as lawless,and have criticized the fact that the state is practically forcing citizens to perform unlimited military service. Some estimates show that as a result, up to three percent of the population has fled, because they no longer see any prospects in the country. In 2015 alone, around 33,000 Eritreans applied for asylum in the EU, making it the number one African country from which people are emigrating.

However, economist Axel Dreher from the University of Heidelberg is skeptical about Thiele’s study and DW’s analysis. In a previously unpublished study, he himself looked at the impact of development aid on refugees, rather than numbers of economic migrants. He concluded that in the first few years, development aid serves to fuel migration. Only much later, with a lag of more than ten years, is it possible to see a decline in the number of refugees. "I don't think development aid can actually reduce migration levels within three years," says Dreher.

DW's data shows a common pattern: The breakdown of development aid often goes hand-in-hand with a rapid increase in emigration. An aid increase that leads directly to a reduction in emigration can only be observed in isolated cases, such as Ethiopia.

"Migration patterns strongly depend on existing migrant networks. For the first wave of people, emigration is still difficult. But if, for example, a large community of Eritreans is already living in Germany, then it makes it easier for others to follow," explains Thiele.

There is also another catch. Looking at the countries from which most people are currently emigrating to OECD countries, one thing becomes clear: Many of these are war and crisis zones, such as Syria, Iraq and Afghanistan.

"Of course, these regions are no longer concerned with the financial situation, but with bare survival," says Thiele. And also in the other countries in the Top 10, where there is no war, such as Vietnam, the Philippines and India, it is evident that an increase in financial assistance is not necessarily accompanied by a decrease in emigration.

In the end, this shows that more development aid can only marginally reduce migration flows. "Other factors are considerably more important," says Thiele. He and Dreher agree that in the future it will be necessary to react much earlier in crisis situations. The West should intervene as soon as refugees start arriving in the neighboring countries to crisis areas. "You can’t wait with reacting until destitute people are standing on your doorstep," says Dreher.

Refugees vote on German coalition: 'A big step for integration'

Syrian refugee Abdulrahman Abbasi is a member of the SPD party and therefore gets to vote on Germany's coalition agreement. He told DW why he thinks it is right that he has the vote even though he is not a citizen. (11.02.2018)

Applications for EU asylum drop by nearly half in 2017

More than 700,000 applications for asylum were lodged in Europe in 2017. One million asylum applications decisions were also made, with 40 percent resulting in refugee status or subsidiary protection. (01.02.2018)

A new joint report takes a critical stance on the European Union's Khartoum Process and suggests it puts more migrants in harm's way, instead of limiting mass migration and combating issues of trafficking and smuggling. (08.11.2017)

Will the Emergency Trust Fund for Africa, launched at the Valletta Summit on Migration, deter people like Gambian migrant Bubacarr Jallow from seeking a more prosperous life in Europe? Migration experts think not. (16.11.2015)

…it has many opportunities. Most importantly, it has to question traditional concepts, in both the areas of economic policy and development aid, writes the great-nephew of the last Ethiopian emperor. (11.09.2017)