The Berlin government has agreed to process asylum applications from 50 of the 450 migrants aboard two EU vessels. Italy is testing a renewed promise by EU leaders to share the migrant burden across Europe. 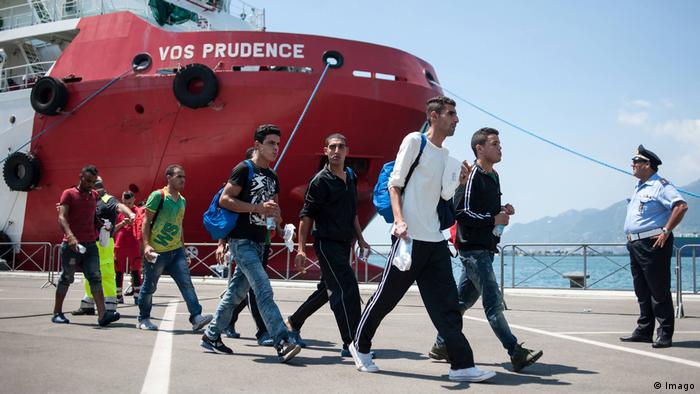 Germany told Italy on Sunday it would take in 50 of the 450 migrants that were picked up by two EU border agency ships this weekend in the Mediterranean Sea.

"Germany and Italy have agreed that Germany will accept 50 migrants in this case, as part of ongoing talks about more intense bilateral cooperation on asylum," a German government spokeswoman told the DPA news agency.

The latest batch of migrants, who had set off from Libya in a wooden vessel, were rescued off the Italian and Maltese coast on Saturday, and eight women and children were taken to the Italian island of Lampedusa for medical treatment.

But even before the rescue unfolded, a row broke out between Italy and Malta over who was responsible for taking in the migrants.

The two patrol vessels, one belonging to the EU border agency Frontex and another to the Italian border police, were stranded in Italian waters after hardline Italian Interior Minister Matteo Salvini — who is also head of the anti-immigrant League party — said the vessels should be sent to Malta, "or better Libya."

The Maltese government rejected the suggestion but said it, along with France, would take 50 migrants each.

Italian Prime Minister Giuseppe Conte spent Saturday in contact with other EU leaders, reminding them that they had agreed at their end-of-June summit on the need to share the migration burden. He urged them to step in urgently to take some of the refugees, and promised Italy would accept its share if others followed suit.

But Conte was quickly rebuffed, from one EU state at least, when the Czech Republic's prime minister, Andrej Babis, refused to take any.

Italy's new populist government, which came to power on June 1, has upended years of migrant policy by banning rescue ships run by migration charities from docking in Italian ports, accusing them of aiding human traffickers.

The Rome government also threatened to block vessels aligned with the EU's border agency Frontex, which also rescue migrants from sinking or unseaworthy vessels in the Mediterranean.

Ministers have long complained that Brussels has done little to help the country deal with the tens of thousands of people who inevitably end up in Italy, having crossed the sea to flee conflict and poverty in Africa and the Middle East.

The German rescue ship Mission Lifeline, with more than 200 migrants on board, was later also refused to permission to dock.

Earlier this month, Rome refused to accept another migrant charity ship that had carried out a rescue off the Libyan coast.

Under international law, refugees cannot be returned to a place where their lives are in danger. Both the United Nations and EU have ruled that Libya is not safe.

Aid agencies have warned that migrants who are being returned to Libya are at risk of facing abuse, rape, beatings and slavery.

A spokesman for Libya's coast guard said Libya would not take in migrants from other countries.

"No, we will not accept any illegal migrants after they are rescued by rescue ships...," the spokesman, Ayob Qassem, told the Reuters news agency on Saturday.

Elsewhere this weekend, Spanish rescuers separately saved more than 340 migrants from the Mediterranean.

The 67 migrants on an Italian coast guard ship have been allowed to leave the vessel. Italy's interior minister blocked their arrival amid reports that some migrants had threatened the crew of their initial rescue ship. (13.07.2018)

Germany: The worst waste of taxpayer money in 2020 0m ago