German Interior Minister Seehofer said he was confident Berlin and Rome would reach an agreement to return migrants by the end of July. But Italy wants a broader EU border security deal first. 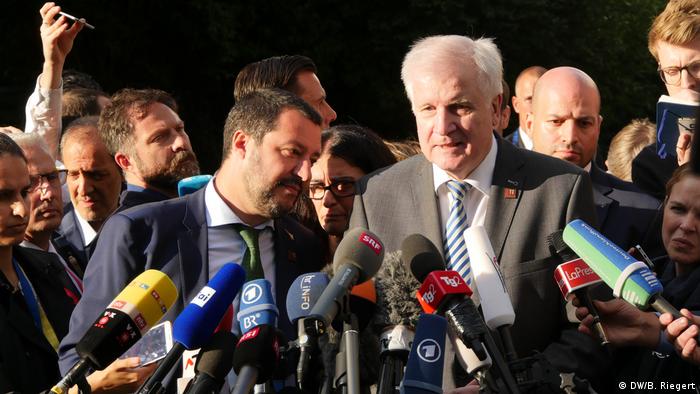 German Interior Minister Horst Seehofer said on Wednesday that he is optimistic about reaching a deal with Rome to return migrants to Italy by the end of July, but his Italian counterpart, Matteo Salvini curtailed the suggestion — saying a broader strategy to protect Europe's borders was needed first.

After the two met in Austria ahead of an informal summit of EU interior ministers, Salvini said that he and Seehofer had a "common objective: fewer landings, fewer deaths, fewer migrants in Italy as well as in Germany."

Salvini added the caveat, however, that "before accepting a single immigrant in Italy, we want Europe to protect its external borders. When that becomes a reality we can talk about all the rest."

Calls for Seehofer to step down

As the leader of the far-right Lega party, Salvini is known for his vitriolic statements about immigration, including calling migrants "smugglers, slaveholders and terrorists" in a spat with an Italian priest who preached against intolerance.

Seehofer, too, has come under fire for some inflammatory rhetoric, including commenting on Tuesday that he was celebrating his 69th birthday as exactly 69 refugees were being deported back to Afghanistan.

One of those refugees, 23-year-old Jamal Nasser Mahmoudi, committed suicide in Kabul on Wednesday shortly after arriving back in his native country after eight years in Germany.

Although the Interior Ministry issued a statement calling the man's death "deeply lamentable," Seehofer has been facing calls from governing coalition partners the Social Democrats (SPD) to step down.

"An Interior Minister so lacking in humanity damages our democracy to which we owe so much," said the SPD in North Rhine-Westphalia, Germany's most populous state. Several other prominent party members joined this chorus, saying Seehofer's recent attempts to sow discord in Chancellor Angela Merkel's cabinet over migration show that he is not fit for office.

When asked by a reporter to respond to the calls he step down, Seehofer replied, "I have nothing to say to that because I don't understand them."

He added that state officials in Hamburg, not the federal Interior Ministry, decided to deport the man who had been convicted of theft, attempted bodily harm, resisting law enforcement officials and violation of the narcotics act.