Horst Seehofer faces calls to resign after deportee suicide | Germany | News and in-depth reporting from Berlin and beyond | DW | 11.07.2018

German Interior Minister Horst Seehofer is under fire after one of the people he joked about deporting killed himself in Afghanistan. Now even members of the governing coalition are saying he has to go. It's a joke that may come back to haunt Horst Seehofer. On Tuesday, while presenting his so-called master plan for migration, the interior minister crowed: "It just so happens that on my 69th birthday, without any orders from me, 69 people were sent back to Afghanistan."

Little did Seehofer know when he made this remark that one of those people had hung himself in a temporary camp in the Afghan capital some hours before. The 23-year-old Jamal Nasser Mahmoudi's suicide was announced by Seehofer's own Interior Ministry on Wednesday and confirmed by refugee workers in Afghanistan.

In a brief statement, the Interior Ministry called the suicide "a deeply lamentable occurrence."

Seehofer, who is also the leader of Bavaria's conservative Christian Social Union (CSU), was already a controversial figure in Germany after leading opposition to Chancellor Angela Merkel's migration policy. Many feared that his rebellion could bring down the government. The crisis was defused last week thanks to a compromise with Merkel's Christian Democrats (CDU), and their junior coalition partners, the Social Democrats (SPD).

Seehofer's approval ratings plummeted because of that public spat, and now voices demanding that he go are growing ever louder — even within the governing coalition.

Some Social Democrats, already irritated by what they consider the interior minister's posturing, took to social media to call upon him to stand down.

"Host Seehofer is a pathetic cynic and unequal to his office in terms of character," Kevin Kühnert, the influential leader of the SPD's youth wing, wrote on Twitter. "His resignation [is] overdue. Anyone home, coalition?"

The SPD chapter in Germany's most populous state, North Rhine-Westphalia, concurred, tweeting: "An Interior Minister so lacking in humanity damages our democracy to which we owe so much."

Cansel Kiziltepe, SPD member of the Bundestag for the state of Berlin, called upon the chancellor to dismiss her interior minister.

"Cynical, inhumane and misanthropic!" tweeted Cansel Kiziltepe. "Seehofer has human lives on his conscience and can no longer be tolerated as a minister, Ms. Merkel!" 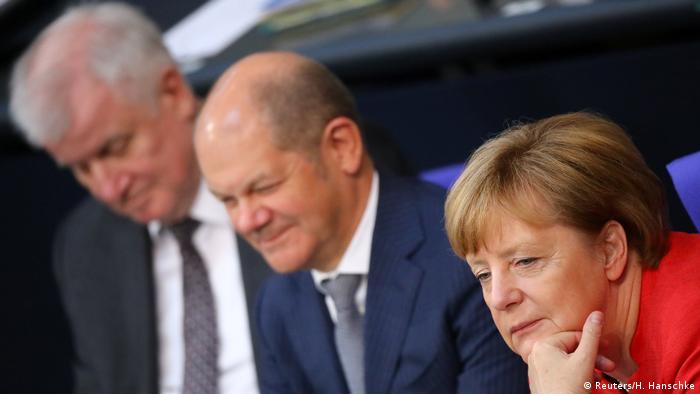 Seehofer has made himself into a burden for the grand coalition

The chairman of center-right Free Democrats in the state of Rhineland–Palatinate, Volker Wissing, tweeted: "As interior minister, Horst Seehofer is also the constitution minister and as such the guardian of free democratic fundamental order and our values. He has conclusively shown that he is not up to the challenge."

"An interior minister who publicly expresses his happiness at people being sent back to a country at war not only obviously lacks basic human sympathy, but also the qualifications for the job," Ulla Jelpke, the Left party's internal affairs spokeswoman,  wrote in a statement on her website. "In my opinion, Seehofer deserves to be fired."

"It's obvious that he is morally overwhelmed by his office and simply ill-suited to carry out his work responsibly," Toni Hofreiter, the Greens' parliamentary leader,  told German radio.

The main leaders of the anti-immigration, far-right populist Alternative for Germany party did not immediately comment on the issue. Nor did leading figures from Merkel's CDU or the chancellor herself.

For his part Seehofer will spend Wednesday evening meeting with justice and interior ministers from other EU states in Innsbruck, Austria. That may provide a bit of respite from the controversy created by his remark and the sad fate of one of the people directly affected by his policies. But it's clear that Seehofer has become a political liability for the Merkel government, and his days heading the ministry may now be numbered.