Interior Minister Matteo Salvini has already banned charity-run ships carrying migrants rescued in the Mediterranean from docking in Italian ports. Now, he wants to do the same to foreign navy ships. 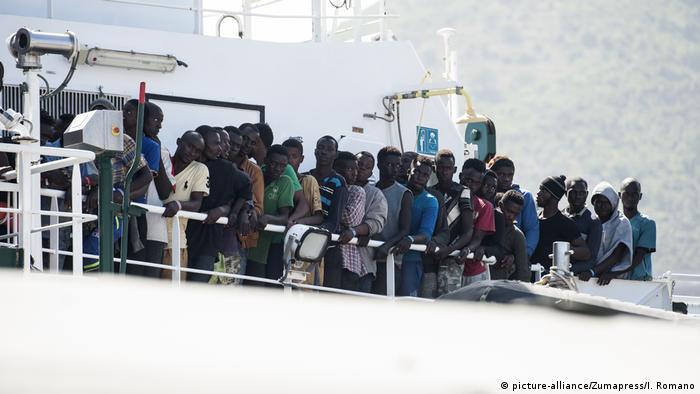 Foreign naval ships participating in European Union and NATO-sponsored search-and-rescue missions transfer many migrants to land at Italian ports. On Sunday, Irish navy ship Samuel Beckett landed in Sicily with 106 migrants on board.

Announcing his decision on social media, Salvini said he would inform his counterparts from other European Union countries about the move at an upcoming EU meeting in Austria.

"Unfortunately, Italian governments over the past five years have signed agreements (in exchange for what?) so that all these ships disembark immigrants in Italy," Salvini wrote. "With our government, the music has changed and will change."

Salvini did not mention any EU or NATO missions by name, but Italian Transport Minister Danilo Toninelli wrote on Twitter that Italy would seek to amend the EU's Operation Sophia operation.

"We respect the rules, but now they will be changed," Toninelli wrote. "Migration can't just be an Italian problem or else the EU is at risk."

Salvini heads the anti-immigrant League Party that has been in a coalition with the populist Five Star Movement since June 1. In an effort to drastically reduce migrant arrivals, he has already blocked charity-run search-and-rescue vessels from docking in Italian ports.

That decision forced France's Aquarius to divert to Spain and Germany's Lifeline to dock in Malta after they both spent days stranded at sea in June.

Migrant arrivals in Italy are down 80 percent in 2018 compared to the same period last year, with some 16,600 arrivals since the beginning of the year.

Mediterranean countries Italy and Greece have taken the brunt of migrant and asylum seeker arrivals to Europe in recent years. Most people seeking refuge arriving in Italy used to continue their journeys to northern Europe. However, the introduction of EU-backed processing centers to ensure migrants are identified at their first entry point in Europe, along with stricter border controls implemented by France, Switzerland and Austria, created barriers along this well-worn route.

The situation has resulted in some 160,000 migrants, who would rather leave Italy, being stuck in the country.