Claus-Peter Reisch commanded the Lifeline when it saved hundreds of migrants off the coast of Libya. He accused European countries of accepting the deaths of migrants "for political reasons." 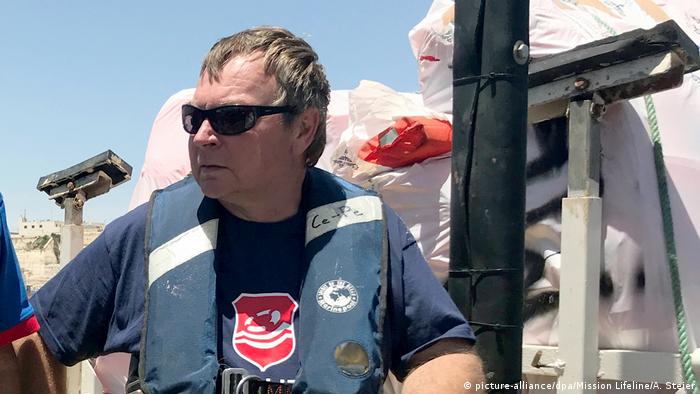 The German captain of a charity-run ship that rescued more than 200 migrants in the Mediterranean in late June has dismissed any wrongdoing after Malta opened legal proceedings against him on Monday.

"Our mission was to save 234 people," Claus-Peter Reisch (pictured) said as he was due to face court on charges of ignoring official Maltese orders and breaking international law. "I'm not aware of having committed any crime."

Reisch is charged with using the boat in Maltese waters without proper registration or license, also incorporating the allegation that he entered Maltese waters illegally.

Reisch was in command of the Lifeline when it saved 234 migrants near the Libyan coast on June 21. The vessel, operated by the German charity Mission Lifeline, was able to dock in Malta on June 27  after the Maltese government initially refused to grant it entry.

Police impounded the ship and arrested Reisch upon arrival. On Monday, prosecutors called on the judge to order the ship's confiscation.

The court set bail at €10,000 euros, with Reisch ordered to deposit his passport with the court.

German Green Party lawmaker was on board 'Lifeline'

The German government has offered Reisch diplomatic aid during the process.

Lifeline was the second migrant rescue ship to be refused docking rights in June. At the beginning of the month, the Aquarius, a French ship with more than 630 migrants on board, was forced to dock in Spain after Italy and Malta refused to grant it entry.

Mission Lifeline spokesman Ruben Neugebauer at the time claimed that Maltese threats to take legal action against Reisch constituted "part of the criminalization of NGO activities" by European governments.

The influx of refugees from North Africa and the Middle East has caused an anti-migrant backlash across the European Union.

In Germany, Chancellor Angela Merkel is facing an uncertain future amid a dispute with her interior minister, Horst Seehofer, who has demanded that police reject certain refugees at the German border.

Speaking on Monday, Reisch accused EU countries of working harder to hinder rescue operations in the Mediterranean than trying to save lives.

"The EU accepts the dying for political reasons," he said. "It's repulsive."

After floating around the Mediterranean for days, the rescue ship Lifeline has arrived in a Maltese port. Malta's prime minister has threatened legal action against the German charity that operates the vessel. (27.06.2018)