After floating around the Mediterranean for days, the rescue ship Lifeline has arrived in a Maltese port. Malta's prime minister has threatened legal action against the German charity that operates the vessel.

A rescue boat stranded for days in the Mediterranean carrying more than 200 migrants docked in Maltese capital of Valletta on Wednesday.

The Lifeline, a vessel operated by the German charity Mission Lifeline, had been waiting for six days for permission to dock after rescuing 234 migrants off the coast of Libya on Thursday.

Malta and Italy had previously refused to grant entry to the ship, but Malta backtracked on Wednesday and gave the ship permission to dock in Senglea.

Police and doctors met the ship as it docked in Senglea port. Maltese Prime Minister Joseph Muscat said authorities would impound the ship and investigate the crew for operating illegally — including violating rescue protocols and operating without the correct registration.

In a tweet, the organization said many passengers were suffering from seasickness and three were in the ship's hospital facility. One passenger had been evacuated, leaving 233 currently on board.

Manuel Sarrazin, a German Green party politician who was aboard the Lifeline, told DW the situation on board had been dire before the ship was authorized to dock.

"It was not an acceptable situation already on Monday," he said. "It's even worse today."

Germany not mentioned in EU deal

Muscat said eight countries — Malta, France, Italy, Ireland, Luxembourg, Portugal, the Netherlands and Belgium — had agreed to take in the migrants currently aboard the ship. He added that EU countries would only accept genuine asylum seekers and deport those deemed to be economic migrants.

Manuel Sarrazin, German Green Party, was on board of the rescue ship "Lifeline"

Muscat did not mention Germany. German Interior Minister Horst Seehofer has said the country could take in some people on condition that the Lifeline ship is taken out of action.

"We have to stop this from setting a precedent," Seehofer said in Berlin, referring to the Lifeline.

The refusal by Italy and initially by Malta to open their ports to the ship — and the haggling among EU states over how to distribute the migrants — showed a hardening of positions as EU leaders head into a summit on Thursday where they are expected to debate measures to tackle the influx of migrants from North Africa and the Middle East. 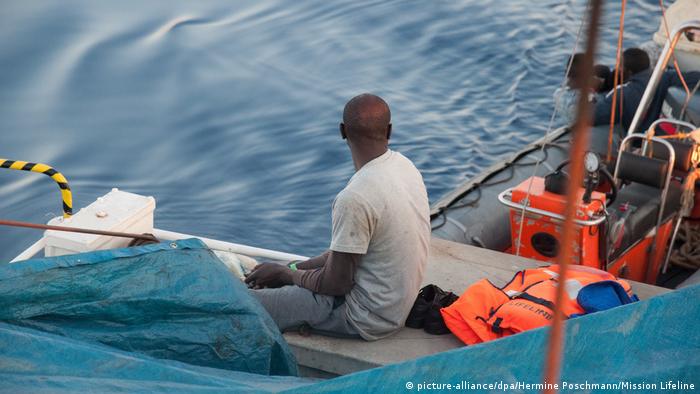 EU nations have hardened their stance against accepting refugees

Italy is expected to propose a new system for distributing migrants more evenly among EU countries, while other countries including Germany, are expected to suggest ways to discourage economic migrants from leaving for Europe.

Italy and Greece have borne the brunt of the arrivals in recent years as people make the dangerous sea journey to seek a better life in Europe, often seeking war and oppression.

Earlier this month, Italy and Malta both refused to let French humanitarian ship the Aquarius dock, forcing the vessel with some 630 migrants on board to travel an additional 1,500 kilometers (900 miles) to Spain.