Lifeline migrant rescue ship 'not allowed' to dock in Malta

After five days stranded in the Mediterranean Sea, the migrant rescue ship Lifeline has said it is not allowed to dock in Malta. Italy's prime minister had earlier suggested it was. 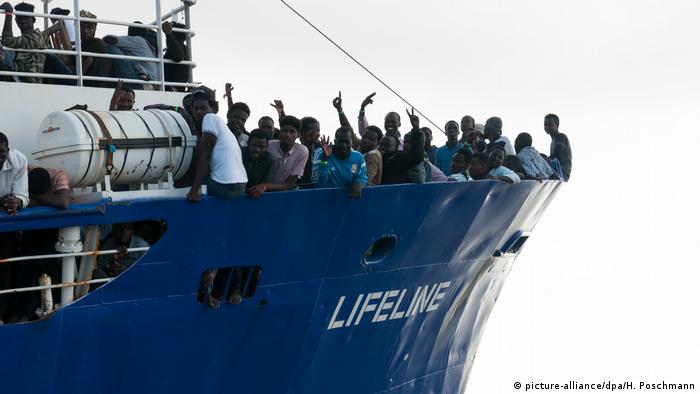 The Mission Lifeline NGO claimed on Tuesday evening that its MV Lifeline ship was "not allowed to enter" Maltese territorial waters.

Earlier, Italian Prime Minister Giuseppe Conte had said the German vessel would be allowed to dock in Malta, although he did not specify when.

"I just got off the phone with [Maltese] Prime Minister [Joseph] Muscat: The NGO ship Lifeline will dock in Malta. Italy will do its part and welcome some of the migrants who are on board the Lifeline," Conte had said.

Although the Maltese government did not confirm Conte's assertion, it said four EU member states have committed to taking some of the migrants. The willing countries are Italy, Malta, France and Portugal, a government source told Germany's DPA news agency.

In Germany, the Berlin State Senate said it was prepared to take in some of the more than 200 migrants, according to DPA; however, it needs authorization from the federal government.

French President Emmanuel Macron said on Tuesday evening that the MV Lifeline defied "all the rules and the Libyan coast guard" and "played into the hands of smugglers" when it picked up hundreds of migrants off the Libyan coast last week, according to France's AFP news agency. Italian Prime Minister Giuseppe Conte earlier said the ship's captain would be investigated over reports that he ignored instructions to let the Libyan coast guard pick up the migrants. The Maltese government earlier issued a statement confirming possible legal action against the Lifeline crew.

"In the event that the vessel enters Maltese ports, there shall be investigations and possible action taken in regards to the MV Lifeline," it said. 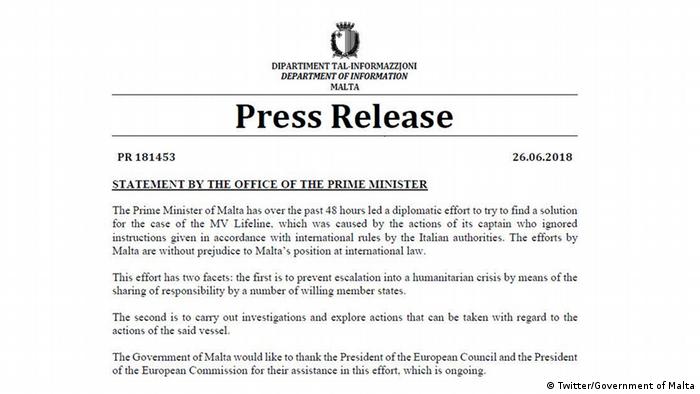 Portuguese Prime Minister Antonio Costa backed calls for EU member states to share the work created by illegal immigration. The country's center-left Socialist administration confirmed its offer to take in some of the people on board the MV Lifeline. Meanwhile, German NGO Sea-Watch — which actively searches for boats in distress off the Libyan coast — called on government spokesman Steffen Seibert to "end this tragedy."

The ship rescued 234 men, women and children off the coast of Libya. It was denied permission to dock by both Spain and the new hard-line Italian government and has been floating in international waters for five days. DW correspondent Bernd Riegert said that France also made it known that the vessel would not be welcomed.

Lifeline has complained that this situation has caused worsening medical and humanitarian conditions on board.

Also on Tuesday, the French government voiced optimism that an EU-wide solution "seems to be emerging" to the most recent phase of the migrant crisis that began in 2015.

The news came two days ahead of a planned EU summit on migration, as German Chancellor Angela Merkel faces revolt within her own government over her stance against a proposed closing of Germany's border with Austria.