Matteo Salvini has warned "the good times for illegals are over." EU ministers will soon be debating the controversial Dublin Regulation at a high-level bloc meeting. 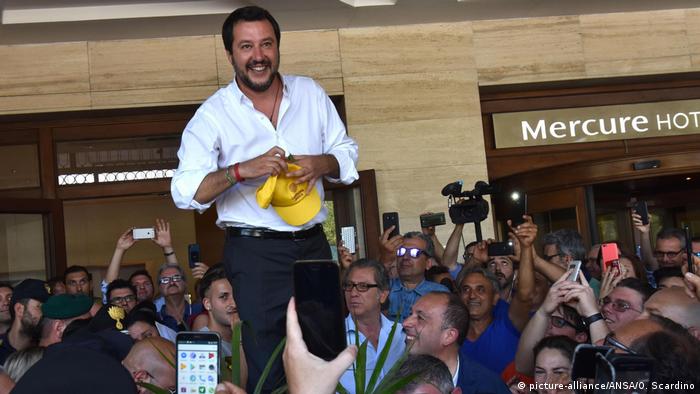 Italy's new Interior Minister Matteo Salvini on Sunday told a crowd of supporters in Pozzallo that his government would use "common sense” to stop Italy and Sicily becoming "Europe's refugee camp."

Due to the Dublin Regulation, Italy has taken the brunt of asylum seeker applications and is required to take on the responsibility of accepting or rejecting them.

Salvini, who is also the deputy prime minister in Italy's new coalition government, is touring the country to rally support for his party's candidates in municipal elections later this month. The Sicilian town of Pozzallo, where Salvini delivered his speech, is one of the main points of entry for refugees trying to escape war, persecution and famine across North Africa and the Middle East.

Some Sicilians protested Salvini's visit to the so-called migrant "hot spot" — the docking point for many of the ships that rescue migrants crossing the Mediterranean Sea in smugglers' boats.

Pozzallo Mayor Roberto Ammatuna rejected Salvini's claim that the island was "a refugee camp of Europe," saying, "Here there are beaches full of tourists."

Potential reforms to Dublin Regulation: The European Union's interior ministers are set to meet on Tuesday to discuss potential reforms to the Dublin regulation. Salvini said he would not be attending, due to a confidence vote in the Italian parliament on the new coalition with Five Star. He has previously said the rule places an unfair burden on Mediterranean countries and creates "an obvious imbalance in management, numbers and costs."

What the Dublin Regulation does: The regulation was designed to quickly determine which EU member state was responsible for processing an asylum seeker. Under the regulation, the country the person arrives in is responsible for accepting or rejecting their asylum application. The main objectives of the agreement are to prevent applications from being submitted in multiple member states and to prevent the number of asylum seekers who are moved from state to state.

Why the Dublin Regulation has hit Italy hardest: Before the agreement was in place, the majority of refugees arriving in Italy would continue their journeys to northern Europe, but the introduction of EU-backed processing centers to ensure migrants are identified at their first entry point in Europe, along with stricter border controls implemented by France, Switzerland and Austria have created barriers along this well-worn route.

How Italy is combatting the situation: Italy's former center-left government and authorities and militias in Libya made a controversial agreement that has resulted in a dramatic decrease in the overall number of arrivals since the summer of 2017. While the amount of arrivals fell 75 percent, in 2018 Italian authorities have still registered more than 13,500 arrivals.