Italy's populist government did not just fall from the sky — it was elected. And the incoming leaders could prove to be an explosive force for the European Union. DW's Bernd Riegert asks: What's next? 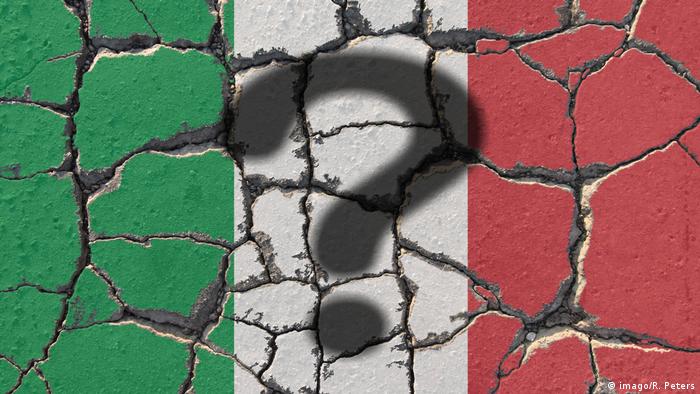 Italians fundamentally distrust their politicians, to whom many disparagingly refer as "the caste." It's a familiar story: Italy's politicians rarely fulfill the promises they make during election campaigns. Once they are in power, it's often about what's doing best for themselves. Those have long been the iron laws of political life in Italy. Now, populists from the left and far right are set to take power.

They are promising historic change, a revolution, to address the concerns of their citizens. Are Italy's iron laws of politics about to be rewritten? Or will this new, inexperienced, but deeply self-confident coalition soon forget the ambitious and somewhat dangerous goals of their governing agreement and instead focus on preserving their own power?

It might sound like a strange thing to say, but it would be in the interests of Italy and the European Union if the same old mechanisms maintain their grip on politics — and if the nationalist revolution fails.

The no-name man tapped to be prime minister, 54-year-old law professor Giuseppe Conte, will hopefully manage to blunt the populists' most radical ideas. If he cannot find compromises between the extremes within his coalition, he could very well soon face replacement.

The leaders of the two parties making up the coalition — Luigi Di Maio of the protest Five Star Movement and Matteo Salvini of the nationalist League — have made big promises to their respective bases: Lower taxes, improved social benefits, earlier retirement, a more favorable relationship with the EU, economic growth and less bureaucracy. The strong-headed Di Maio and Salvini are likely to try and use Conte as a puppet for their own populist power games.

"Italy first" is the hollow rallying cry for the new leaders in Rome. That stance has left officials from the EU shuddering. They have argued that if every nation tries to go its own way, that does not leave much room for solidary among citizens in the bloc. "Nobody needs to fear us," The League's Salvini has said. But we should fear them. Brussels is allowed to be concerned, because the populists set to take over the EU's third-largest economy could rattle the euro zone with irresponsible financial policies.

"Italy is not Greece," the new coalition in Rome has said. That's true. Italy is a founding EU nation and much larger than Greece, but it also has massive amounts of debt. To bail out an economy as large as Italy's in a way that is similar to what happened in Greece would be practically impossible.

The populists made out the euro currency, and its German fiscal guardians, to be the source of all evil during their campaign. It cannot be ruled out that they are actively trying to damage the economy in an effort to destroy the euro. Italy could introduce its own currency overnight and leave the eurozone.

The financial markets are simply ignoring the populists. The European Central Bank (ECB), with its flood of capital, is helping to keep Italy and other struggling countries afloat. It begs the question: How much longer can that last? If the ECB raised interest rates, it could quickly get ugly for Italy, to say the least.

When it comes to immigration and asylum policy, the nationlist League threatens to torpedo all of Brussels' decisions. A sensible system of distributing migrants throughout the EU seems now like a distant dream. Close the borders and kick the foreigners out — that's about all The League seems to have in the way of proposals.

The vow of its leader Salvini rings hollow: Italy will change, and it will try to change the EU with it. How far can or should we go when it comes to seeking compromise with these new radicals?

Nonetheless, the EU should not be nervous. Heated or panicked attacks, like those from France's finance minister over the weekend, will have the opposite of their intended effect. Italy does not respond happily to criticism from abroad — and that doesn't just go for the populists. This, too, is one of the iron laws of Italian politics.

COVID vaccine: Moderna shots can be 6 weeks apart, WHO says 2m ago