Giuseppe Conte has been chosen by a coalition of two populist parties as its pick to be Italy's next prime minister. The move could set Italy on a collision course with the EU. 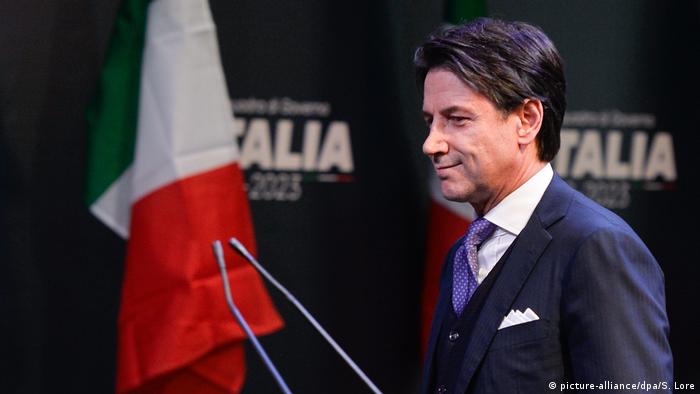 Giuseppe Conte, a 54-year-old law professor and something of a political novice, was named as the pick to be Italy's next prime minister by Five Star Movement (M5S) leader Luigi Di Maio.

Conte, who was born in the southern province of Foggia and has never been elected to parliament, comes from the M5S side of the coalition.

The now-likely coalition government in Rome made up of the M5S and League parties is on a possible collision course with other EU member states after it announced spending plans likely to increase the country's already towering public debt.

What is in the coalition deal? The two parties agreed to give monthly payments of at least €780 ($920) to Italians living below the poverty line. The deal also foresees a maximum individual tax rate of 15 percent, while business would pay 20 percent at most. The platform includes the introduction of tougher rules on deporting migrants and calls for fostering dialogue with Russia on economic and foreign policy matters.

Why is the EU concerned? Italy is the third-largest economy in the EU, but is running public debt of more than 130 percent of GDP— second only to Greece. Economists and EU policymakers worry that the spending plans contained in the coalition's program will increase the country's debt burden still further. The coalition is also at odds with the EU over its pro-Russian stance and over its euroskeptic attitude, reflected in League leader Matteo Salvini's "Italians First" motto.

In response to the bloc's concerns, M5S's Di Maio said "first let us govern, then you can legitimately criticize us."

What is M5S? The Movimento 5 Stelle or Five Star Movement was founded in 2009 by comedian Beppe Grillo. The "five stars" stand for the five key issues originally embraced by the party: public water, environmentalism, sustainable transport, sustainable development and rights to internet access. It also supports direct democracy and advocates anti-consumerism and anti-capitalism.

What is the League? The League is a federation of several regional parties from Northern and Central Italy and until December 2017 went under the name of Lega Nord, or Northern League. It has a far-right anti-immigration stance and has in the past even expressed hostility to people migrating to Northern Italy from the poorer south.

Why are they working together? In March 4 elections, M5S received 32 percent of the vote while the League-led right-wing coalition managed a combined 37 percent. Neither party reached the 40 percent necessary to govern.