Italy: The populist odd couple preparing for government | Europe | News and current affairs from around the continent | DW | 21.05.2018

The anti-establishment 5-Star Movement and far-right League are on the verge of forming the new Italian government having promised a "revolution." DW looks at Italy’s potential first populist coalition. 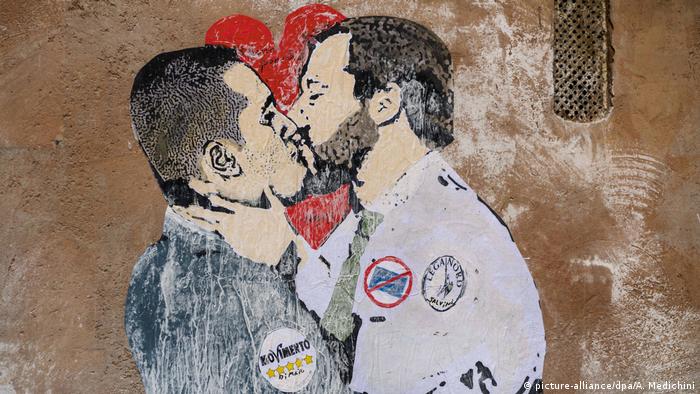 For two weeks now, the League's Matteo Salvini and Luigi Di Maio from the 5-Star Movement (M5S) have been wrestling their way to a coalition deal, with sticking points including, above all, who would get which posts in a potential government. Both men wanted to be prime minister, so now they have privately agreed on another person to serve as a figurehead to oversee the implementation of the policy program that they finalized last Friday.

On Monday, the men presented the law professor Giuseppe Conte, a political novice, to President Sergio Mattarella as their joint nominee. The president will have little choice but to task the nominee with the formation of a government. A populist, euroskeptic government.

Di Maio and Salvini didn't want to reveal the name in advance; instead, they made melodramatic statements affirming that it would be an experienced politician who would concentrate exclusively on implementing the contract of government. Italian media have tipped Giuseppe Conte, a professor of public administration law at the University of Florence, as the likely candidate.

Right up until the last minute it remains unclear whether the party leaders will assume ministerial office themselves. Italian media analysts have speculated that they might prefer to take a back seat and steer their unprecedented populist-nationalist coalition from there.

However, there are indications from both parties that Luigi Di Maio will assume the leadership of a newly created "superministry" for work and growth. Matteo Salvini, notorious for making xenophobic remarks, may head up the Interior Ministry, meaning he would be responsible for immigration and asylum policy. Both coalition parties want to put a stop to immigration from Africa to Italy, and aim to deport 500,000 migrants.

Two weeks ago, when it became apparent that none of the traditional Italian parties would be able to form a coalition, Mattarella made no secret of the fact that he would prefer to install a caretaker government for one year. Nobody really anticipated that the League and the 5-Star Movement, bitter rivals during the election campaign, might suddenly come together in a coalition with a relatively stable parliamentary majority. Mattarella is not in any real position to reject the alliance and the prime minister — doing so would precipitate a constitutional crisis.

Matteo Salvini, until now a member of the European Parliament for the far-right, nationalist League, has rejected criticism of the new alliance. "It's about Italy first. The French would do better to focus on their own issues," said Salvini, after his last meeting with 5-Star leader Di Maio. It was a response to comments made by French Finance Minister Bruno Le Maire, who had called on Italy to observe the deficit criteria and other EU obligations. "The new coalition could put the entire eurozone in danger," Le Maire had prophesied. Both the League and M5S rejected any form of interference. Luigi Di Maio also made use of the populist formula, borrowed from US President Donald Trump: "This is now not about what pleases the EU or Germany. Now the Italians come first."

For the time being, both Di Maio and Salvini intend to ignore the mounting interest fees on Italian government bonds. Their position is that their concern is for the Italian people, not markets and investors. According to the coalition agreement, they want to put the period of economizing — so-called austerity policy — behind them, and have announced that the agreements with the EU should be renegotiated in Italy's favor.

However, Matteo Salvini made clear that the coalition parties do want to stay in the EU, in the euro monetary union and also in NATO. "We want to remain in the Atlantic alliance, but at the same time we also want to aim for better relations with Russia," Salvini said. The League has concluded an agreement with the party of Russian president Vladimir Putin. Both populist coalition parties will campaign in Brussels for a lifting of the EU sanctions against Russia imposed in response to the annexation of the Crimean peninsula and Russia's activities in eastern Ukraine.

How the tax reductions and new welfare benefits promised in the coalition agreement are to be financed remains unclear. In a television interview, former EU Commissioner Mario Monti warned, "It's not necessary to know every detail of this in the beginning. What is clear, though, is that the new government can't operate against EU markets and rules long-term." Monti headed an Italian transition government in 2010 at the height of the financial crisis.

Who will pay for it?

On its website, M5S calculates as follows: The government program will cost €20 to 30 billion ($24 to 35 billion) a year, of which €40 billion would be recuperated over five years by simplifying the tax laws. The coalition plans to cut 30 billion in "unnecessary” spending. It intends to raise the outstanding amount — around €30 billion — by increasing deficits. Italy currently has a debt level of 130 percent of its gross national income and the highest nominal debt of any EU country.