The Lega Nord chief has said he has a "right" to govern after winning 17 percent of the vote in national elections. DW looks at the man who unseated the twenty-year leader of Italy's far-right party. 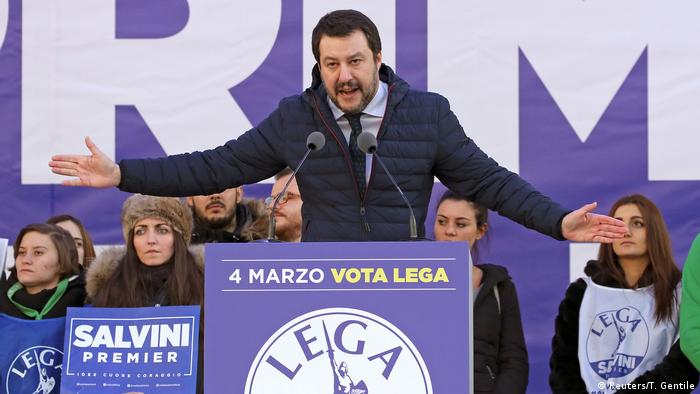 Initial projections on Monday morning put Italy's far-right Lega Nord (Northern League, or Lega) at 17.7 percent of the vote in national elections. The result exceeded expectations and thrust the party into the driving seat of a right-wing alliance forged by Silvio Berlusconi. The former prime minister's Forza Italia took 14.4 percent.

He added he was "committed to the deal" within the bloc that whichever party came away with the most votes would nominate the future prime minister.

Whether or not he becomes prime minister remains to be seen but Salvini, 44, has already left his mark on Italy's far-right.

The Milan native took over Lega in 2013. His victory to become party leader marked a massive shift — founder Umberto Bossi had held the top job for nearly twenty years. Salvini quickly set to work transforming the party into a more mainstream form of populism that could appeal to voters outside of Lega's core support in the northern regions of Lombardy, Piedmont and Veneto.

At its inception, Lega called for greater autonomy for Italy's northern regions, and at times even demanded secession from Rome, who it called "the big thief." The party was able to expand its base by preying on the resentment of some northern Italians who believed their tax money was being wasted on the south, and by entering into several high-profile alliances with ex-PM Berlusconi.

'A crime against humanity'

Under Salvini, the party has veered to staunch euroskepticism. It is especially critical of the euro currency, which Salvini has called a "crime against humanity."

He also took the party's hardline stance on immigration even further, suggesting once in 2009 that Milan introduce "train cars for Milanese only" following rising migration to the city from "non-EU countries."

Salvini has also sought to distance the party from its origins as a northern regionalist organization. He founded the sister party Noi Con Salvini (Us with Salvini) to appeal directly to southern voters, and has proposed changing the party's name from Lega Nord to simply Lega.

Unlike many previous far-right leaders in Italy, Salvini has also made a priority of aligning himself with other populist leaders. A member of the European Parliament for Lega since 2004, Salvini later began forging connections with French far-right leader Marine Le Pen and their Dutch counterpart Geert Wilders. Salvini is also an outspoken supporter of US President Donald Trump, gleefully tweeting a picture of them holding hands at a Trump campaign rally.

Much of his behavior as leader has been slammed by party founder Bossi, who likes to recall Salvini's left-wing roots when criticizing his successor (Salvini belonged to a left-wing social club as a teen before joining Lega's youth wing).

Denunciations are something he is used to from all sides of the political spectrum. A rival politician once accused him of running a campaign of "scandalous miseducation" — the Italian way of saying "fake news."

Salvini remains vehemently undeterred on the political stage, saying on Monday that his 17% of the vote gave him the "right" to be prime minister.

Italy heads to the polls in fractious election

Italians are casting ballots in an election pollsters say will likely result in a hung parliament. A bid for power by a group led by scandal-ridden former premier Silvio Berlusconi has added spice to the campaign. (04.03.2018)

All of Europe is watching as Italy elects a new parliament on Sunday. Italy's far right is expected to make tax cuts and deficit-spending a priority if it wins Sunday's election.