A refugee NGO in Italy is hoping that the country's new populist government will fail to implement the hardline immigration reforms promised during the election campaign. DW's Bernd Riegert reports from Rome.

"Sometimes, we take the migrants to a bar in the neighborhood after class," says Chiara Bergamini, an Italian language teacher for the nongovernmental aid organization In Migrazione. "In general, the people at the bar are opposed to migrants, but not to those we bring along."

That's how she describes the popular sentiment toward asylum seekers in the country. People take a different point of view once they've seen and spoken to a migrant, Bergamini says.

Four days a week, Bergamini heads to a Rome suburb to teach migrants from a range of different countries. Many of her students live in a nearby camp, where they wait for a decision on their asylum applications or an extension of their residency permits. 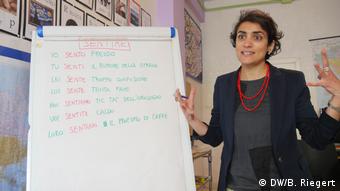 Many migrants are illiterate, Bergamini explains, and many are traumatized from their past experiences. "Some are depressed, they can't get out of bed, or they stare at their mobile phones all day long to stay in touch with home," she says, adding that others who escaped to Europe for economic reasons are frustrated and disappointed to be stuck in Italy and forbidden to work. Some commit crimes and some steal or turn violent, Bergamini concedes, but the majority of those who have come to the country are very thankful and humble.

Hamadoun Fofana, a young refugee who fled Mali in 2015, is not familiar with the immigration proposal put forth by Matteo Salvini, Italy's potential new interior minister. Salvini leads right-wing nationalist party The League, which is set to form a governing coalition with the populist Five Star Movement. He says he wants to deport 500,000 illegal migrants from the country.

Fofana has never even heard of Salvini. "No one here has ever been mean to me, and I hope that isn't about to change," he says.

But In Migrazione President Simone Andreotti is worried about Salvini, who has said that refugees are for the most part criminals Italy needs to get rid of. The mood is tipping, Andreotti says, adding that attacks on migrants and foreign-looking people could very well increase. "In February, an Italian shot at blacks in Macerata, which triggered protests against racism," he says. "Refugee camps have pretty modest standards already ... and it could get worse." Andreotti argues that the Italian system is not one geared toward integration. Refugees are kept in large camps outside of cities, where they have no contact with the local population and can't learn the language or customs, a system the country's previous social democratic government introduced. "It's not likely to improve under Salvini," he says.

"We try to show the migrants that Italy is more than the camp where they are housed, we motivate them to get up every morning and to do something," Bergamini says.

Deportation not an option

Both Andreotti and Bergamini agree that deporting 500,000 people is impossible. "Salvini can't push that through even if he wanted to," says Andreotti, arguing that the government would first have to locate that many people and then find a country willing to take them. He believes that while the policy is popular, it can't be put into practice.

After registering in southern Italy, migrants can spend months in entry camps before they are distributed, often either to smaller facilities or mass accommodation in the north — if they ever get there. Andreotti says they sometimes "go into hiding, take on illegal jobs as field hands in the south or continue their journey to France, Germany or elsewhere." 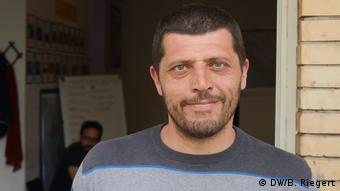 Under EU law known as the Dublin Regulation, the first member country refugees enter is the one responsible for processing their asylum applications. Salvini is likely insist other EU states take migrants off Italy's hands, but the states that have so far persistently refused to do so are also ruled by populist, nationalist governments: Poland, Hungary, the Czech Republic and Austria.

Meanwhile in the classroom, Hamadoun Fofana and a few other students play a card game to work on their colors and numbers. Their Italian is still a little rough. Fofana is not worried about the political situation in Italy. "I think everything will remain as it is," he says. "Besides, if I had to leave, where would I go?"

Italy is inching closer to forming a goverment after March 4 elections. Tipped to lead the populist coalition is an unknown law professor who will have to manage an unwieldy alliance bent on radical reforms. (21.05.2018)