Refugees in Italy face long wait for a new future | Europe | News and current affairs from around the continent | DW | 28.08.2017

The number of new refugees arriving in Italy has swiftly dropped in recent weeks, yet small communities in the south of the country have their hands full. DW's Doris Pundy reports from Sicily. 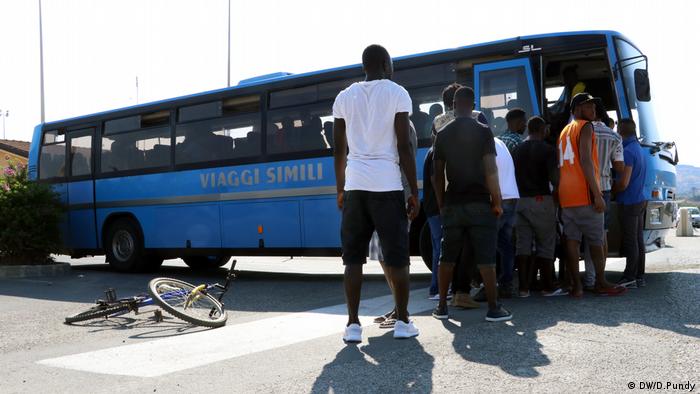 It's 9:00 a.m. at Europe's largest refugee center. About 100 men, women and children are waiting for the bus under Sicily's blazing summer sun, as they do every morning. The destination is Mineo, a small city 10 kilometers (6 miles) from the refugee center. Other than old bikes, the bus is the only connection between the isolated refugees and residents of Sicily.

A long wait for asylum

"I take the bus once a week," said Fabrice, an asylum seeker from Ivory Coast whose name has been changed, explaining it can be a welcome change of pace. During the rest of the week, Fabrice goes for walks in the barren hills surrounding the refugee center. There is little else to do there, he said.

The center is home to roughly 2,900 asylum seekers from more than 40 countries. It used to be a military base, housing US troops. Barbed wire continues to ring the property. Its only entrance is still manned by armed soldiers.

"We get enough to eat and everyone has his own room," Fabrice said. There is space outside to play sports, but he often finds it much too hot in Sicily to do so. He isn't allowed to work, he added, which makes boredom a major problem. 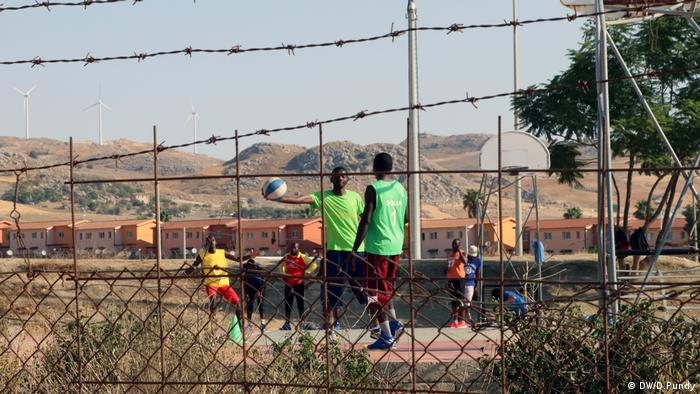 Sports can provide an escape from the boredoom of everyday life for asylum seekers, weather permitting

Fabrice arrived more than two years ago after traveling across the Mediterranean Sea and has been waiting for his asylum to be approved ever since. "The long wait is really hard, but what else is there for us to do?" he said. "I can't start my new life in Italy without papers."

A Muslim among the Catholics: 'A salvation'

Karamo Caseey knows boredom and waiting, too. He lived at the refugee camp near Mineo for a year-and-a-half until his papers came through. Today he is in Catania, a Sicilian port city, preparing lunch in the Sant'Egidio church's community center kitchen.

The 23-year-old Muslim from Gambia first learned of the Catholic church here from his Italian teacher at the refugee center. When church members received him with open arms, "it was like salvation for me," he said. 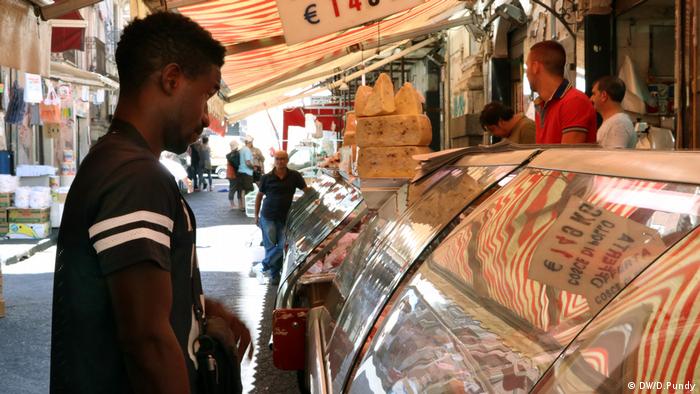 Caseey buys his food at the market in Catania

In 2013, the Sant'Egidio church began inviting refugees to their daily meals for the homeless and others in need. Church members and refugees renovated the house next to the church, turning it into a community center. There was a three-day summer camp there in mid-August for refugees from all around Sicily.

Caseey was one of the first refugees to take part in the community meals and festivities in Catania. "The connection to the community was a huge help for me when I was still living in the refugee center and didn't know what would happen to me," he said. Now he has a job and a small apartment. He still comes by the church nearly every day. Having not seen his family since leaving Gambia at 18 years old, he describes Sant'Egidio as "my new family."

The port in Catania is where refugees like Caseey and Fabrice, rescued from the Mediterranean, begin the long wait for their future in Europe. The large, white tent on the quay today sits empty. Just weeks ago it was the daily site of officers from Frontex, the EU border agency, taking the fingerprints of new arrivals. There are far fewer officials present now that the Italian government is supporting the Libyan coast guard in a bid to stop the flow of refugees. 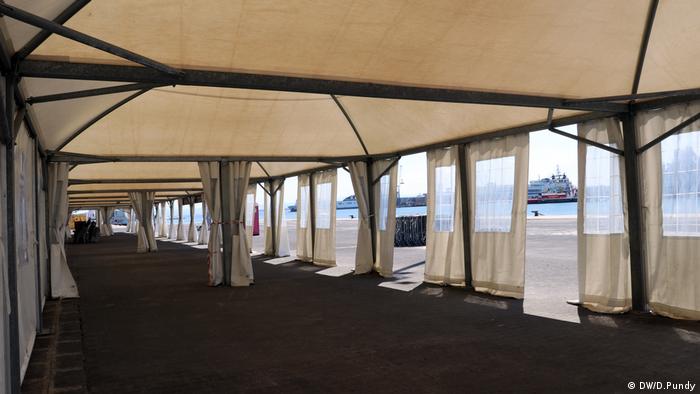 Marco Rotunno of the UN Refugee Agency (UNHCR) believes the refugee crisis is far from over. "In all this year, a similar number of migrants came as last year," he said, adding that over the last few years, Italian authorities made progress in providing for migrants' basic needs, but several thousands asylum seekers got holed up, overwhelming smaller cities like Catania.

The European Union is responsible for finding a solution to the crisis, Rotunno said. EU member states agreed two years ago to resettle nearly 40,000 refugees in Italy, but only 8,000 actually have been. Italy could have been relieved of the burden, Rotunno said, if EU states held up their end of the deal, allowing for Italy to process the asylum applications that had piled up and focus on integrating those already in the country.

"There is a complete lack of will on the part of other states," he said. "Some won't even take the smallest number of refugees."

In light of reluctance among other EU states, refugees who safely reach Italy will need to continue waiting patiently until their fates are decided.

Violent clashes erupted as police intervened at Piazza Indipendenza in Rome to evict migrant squatters from the square. The use of force raised a storm of political controversy. (25.08.2017)