Italy's interior minister, Matteo Salvini, has let minors leave a rescue ship in Sicily, but 150 people remain on board. He has demanded other EU countries, including Germany, take in the remaining migrants. 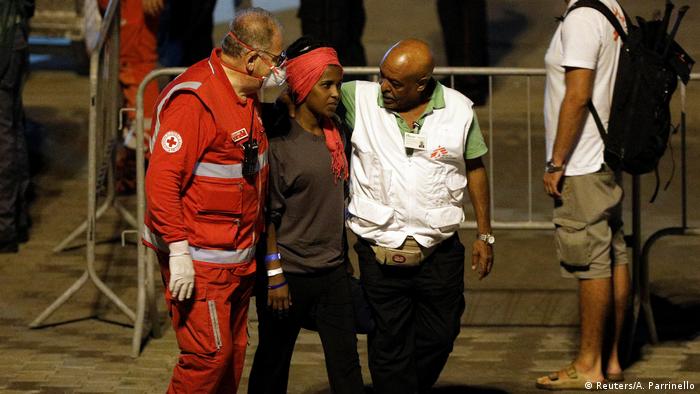 After spending almost a week on the Italian coast guard ship Diciotti, 27 migrant children were on Thursday allowed to disembark from the vessel at the Sicilian port of Catania, Italian news agencies reported.

Aid organization Doctors Without Borders (MSF) said it had finally met the children; the Italian Interior Ministry said they were all between 14 and 16 years old. A delegation from Italy's guarantor of personal rights office also boarded the ship.

Italy's Interior Minister Matteo Salvini had said on Wednesday that he would allow children to leave the rescue ship, but refused to let the remaining 150 migrants on board off the vessel.

"If there are children on board, they can get off now," Salvini said in a Facebook video. "For the others ... nobody gets off," he added, while challenging Prime Minister Giuseppe Conte or President Sergio Mattarella to overrule his decision.

The Diciotti was given permission to dock at Catania after a standoff with Malta, which refused to let the vessel dock at its port.

Italy's commissioner for the rights of detainees, Mauro Palma, said that the migrants are "de facto deprived of freedom without any legal basis or judicial oversight," and announced an inspection on the Ubaldo Diciotti would take place on Thursday.

Salvini, who heads Italy's right-wing Lega party, responded to the reports on Twitter, saying the unknown person was no stranger and it was in fact him.

"No one unknown, investigate me!" Salvini tweeted. "I am the one who does not want more illegal immigrants to land in Italy."

Salvini has requested that other European Union countries step up and take in the remaining migrants. Germany is among those who received a request, but the German government has yet to make a decision.

The Interior Ministry in Rome said that the European Commission has called a meeting to discuss the issue on Friday.

The new populist coalition government in Rome has refused to let a number of migrant ships dock in Italy since it took office in June.

Salvini has said he wants to send the migrants back to Libya, the main departure point for boats often filled beyond capacity with asylum-seekers headed for Europe.

The 67 migrants on an Italian coast guard ship have been allowed to leave the vessel. Italy's interior minister blocked their arrival amid reports that some migrants had threatened the crew of their initial rescue ship. (13.07.2018)

Italy wants other EU states to open their ports to ships from the bloc's Sophia naval mission in the Mediterranean. It's Rome's latest move to pile pressure on EU states to share the migrant burden. (20.07.2018)