Italy will be jointly governed by right-wing and left-wing populists. The country may be headed for turbulent times, particularly with regard to its economy, and that chaos could spread to the EU, says Barbara Wesel. 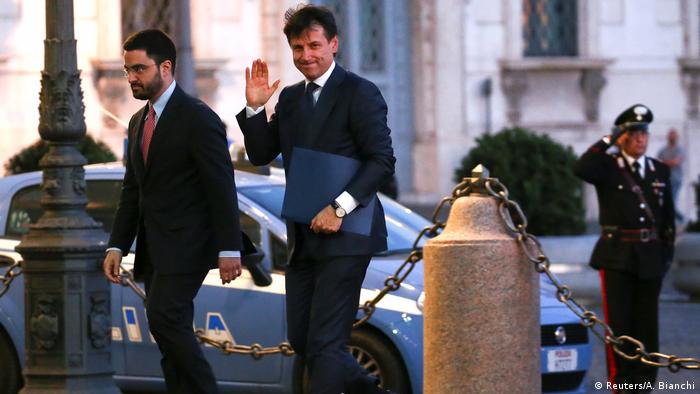 In the end, the new Italian government was formed according to the principle that a bird in the hand is worth two in the bush.

Matteo Salvini, the leader and clever strategist behind right-wing populist party The League, had been hesitating for a long time, pinning his hopes on new elections. His approval ratings had skyrocketed in recent polls and he was hoping his party could ride that momentum into a new parliament.

Prudence eventually prevailed, and for the second time he gave his blessing to a forced marriage with the 5-Star Movement (M5S).

It would be a miracle if the new prime minister, Giuseppe Conte, turned out to be anything more than a puppet controlled by the two party leaders. After all, this unknown law professor has no ties to either M5S or The League — his power is merely "borrowed." Conte is destined to become a weak figure, a head of government who must call The League and M5S headquarters before making promises to foreign counterparts like German Chancellor Angela Merkel and French President Emmanuel Macron.

Barbara Wesel is based in DW's Brussels bureau

And that goes for the whole cabinet, which also consists of novices — few have ever done more than work at city hall. The new finance minister, Giovanni Tria, is a hitherto unknown economics professor, without any previous government experience. Journalists were scrambling to look him up on the internet after seeing his name among the list of ministers. What little we have learned so far is that he is apparently euro-friendly.

With the exception of the new foreign minister, the whole government is made up of novices which only affords it more credibility in the eyes of its supporters. After all, standard populist rhetoric includes railing against the establishment. But inexperience can be problematic. Just look at Virginia Raggi, the M5S mayor of Rome, who has failed at tackling the Italian capital's problems. She is proof that governing requires more than talking big or, at best, a few good intentions.

The platform of this unusual coalition — whose ideologies are completely incompatible — is predominantly made up of unaffordable gifts to the voters. Those voters, in turn, are so anxious to see change, to see new faces at the helm of Italian politics, that they forgot to do the math required to enact their much-desired reforms.

For example, the flat tax that The League leader Salvini promised his supporters will cost billions of euros in public money and be profitable only for those whose annual incomes exceed €30,000 ($35,000). Ordinary people, however — who largely voted for the populists — will be worse off than before.

The basic income which M5S has pledged the country's poor southern regions more or less replaces social insurance, which has been absent for decades in Italy. Regrettably, it can't be financed from state coffers at the moment, and the giant holes that both projects will create in the budget cannot be closed by arbitrarily taking on more debt.

The general idea behind this new government's economic approach is that Italy will, in the face of the world's current financial struggles, trigger growth by spending even more money, despite its already-existing debt. A handful of economic experts have been recommending exactly this. But since US President Donald Trump is currently leading the global economy into the abyss, it is impossible to see how Italy is supposed to escape from this maelstrom.

A nightmare for Brussels

The European Union is not exactly thrilled with the emergence of this populist troupe. With the Greek economic crisis more or less overcome, another — and a much more serious —threat to the eurozone has appeared on the horizon. Economically speaking, Italy is 10 times larger than Greece. If Rome went bankrupt, the ensuing financial market crash could spell disaster for the common currency as a whole.

It remains to be seen how many costly campaign promises Italy's new government will actually follow through on. In any case, Brussels will be facing turbulent times because the Conte government will ask for a license to incur massive debts. The EU, of course, will not grant anything like that, and so a dispute seems inevitable.

How can this coalition be kept together?

Even beyond that, this Italian government is destined for trouble. The statements from The League leader Salvini on race segregation on trains demonstrate his right-wing extremist, racist attitude. If he, as interior minister, rounds up migrants in camps, this will trigger a bitter fight for human rights in Italy. It remains a mystery how the officially left-leaning M5S can tolerate Salvini's demagoguery and anti-immigrant ambitions.

One more thing: The populists in Rome have been telling people that Germany is to blame for the crisis in Italy. This is malicious nonsense. Italy's average per capita wealth exceeds that of Germany, but the country has a severe distribution problem. It's time for Italy's new leaders to stop blaming chaos, corruption, sloppiness, profiteering and whatever else is paralyzing this beautiful country on others. The ball is now in their court.

Ukraine: Deaths reported in 'massive' shelling of Sloviansk — as it happened 5h ago