North Korean leader Kim Jong Un is to meet with Chinese President Xi Jinping for the fourth time in less than a year. The visit to Beijing comes as denuclearization talks with the US have stalled. 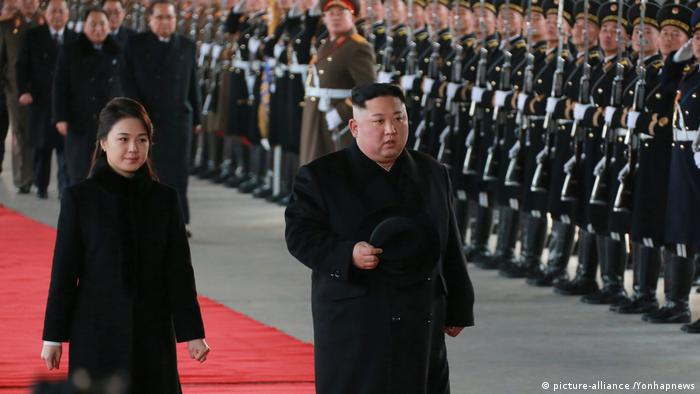 North Korean leader Kim Jong Un has arrived in Beijing for the start of a four-day trip, Chinese and North Korean state media reported, as preparations are being made for a second summit with US President Donald Trump.

It will be the fourth meeting in China between the reclusive North Korean leader and Xi in less than year. The two leaders first met last March, six years after Kim succeeded his father as leader.

Relations had soured between the two neighbors over the North's missile and nuclear tests that threatened to escalate into war with the United States before a diplomatic breakthrough last year.

China is the main diplomatic ally and trading partner for isolated North Korea, and the visit signals the two neighbors are coordinating policy ahead of talks with Trump over denuclearization on the Korean Peninsula.

"Both Xi and Kim see value in coordinating their positions in advance of Trump-Kim summits. That appears to be a pattern," Bonnie Glaser, a senior adviser at the Center for Strategic and International Studies, told AFP.

Since the historic Trump-Kim summit in Singapore last June, progress on the details of North Korea's denuclearization plans have stalled. However, in one major success for the US, the North has refrained from provocative nuclear or missile tests for more than a year.

The US wants solid assurances and verification that North Korea will dismantle its nuclear program before it ends its sanctions, while Pyongyang is seeking the lifting of international sanctions and a peace treaty officially ending the 1950-1953 Korean War.

Meanwhile, on the diplomatic front, North and South Korea have taken confidence-building measures, with exchanges between top officials and meetings between Kim and South Korean President Moon Jae-in.

Seoul "expects that high-level exchanges between the North and China ... will be able to contribute to the complete denuclearization and establishment of permanent peace on the Korean Peninsula," a South Korean Foreign Ministry official said Tuesday, according to the Yonhap News Agency.

In a New Year's speech, Kim said he is ready to meet with Trump anytime to discuss denuclearization. But he also warned that he may seek alternatives to a summit with Trump if sanctions are not lifted.

Analysts interpreted the comments to mean that North Korea could rely on China to ease pressure if talks with the United States collapse.

"Kim is eager to remind the Trump administration that he does have diplomatic and economic options besides what Washington and Seoul can offer," Harry J. Kazianis, director of defense studies at US-based Center for the National Interest, told Reuters.

"In fact, during his New Year's Day speech, Kim's 'new way' that he referred to may well have been a veiled threat to move closer to Beijing," he said.

However, in an interview with CNBC on Monday, US Secretary of State Mike Pompeo said China was helping in resolving issues on the Korean Peninsula.

"China has actually been a good partner in our efforts to reduce the risk to the world from North Korea's nuclear capability; I expect they will continue to do so," he said.

North Korea demands concession from US before it will disarm

North Korea's foreign minister said Pyongyang will not disarm without first receiving concessions from Washington. It's a different tone than the one set by Trump and Kim, which the US leader described as loving. (30.09.2018)

North Korea has agreed to take big steps toward denuclearization and rapprochement with the South. But experts remain skeptical about whether these promises will result in any real change on the ground. (19.09.2018)