In his New Year's Day speech, the North Korean dictator warned the US not to demand unilateral action. Otherwise, Pyongyang will seek a "new path." 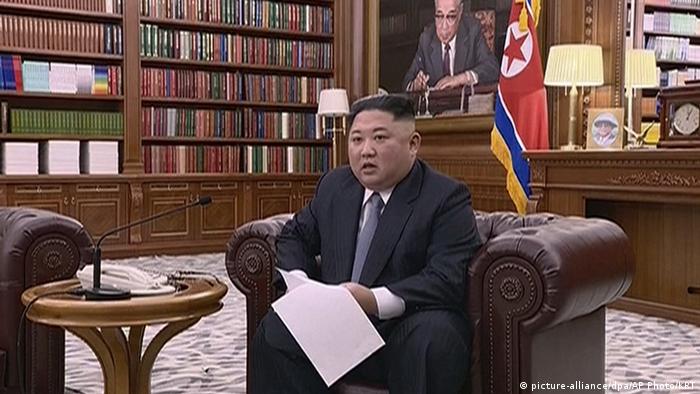 On Tuesday, North Korean leader Kim Jong Un said he wanted to continue denuclearization discussions with the US, but warned that his patience should not be tested.

In his New Year speech, he called on the US to halt its joint military exercises with South Korea and to refrain from deploying military assets on the peninsula.

Read more: Will there be a breakthrough on the Korean Peninsula in 2019?

Kim warned that he might have no choice but to seek a new path if Washington "continues to break its promises and misjudges the patience of our people by unilaterally demanding certain things and pushes ahead with sanctions and pressure."

"If the US does not keep its promise made in front of the whole world," Kim said, "we may be left with no choice but to consider a new way to safeguard our sovereignty and interests."

US needs to come to the table

Kim said North Korea had shown it was willing to take steps toward denuclearization, but the US needed to offer more compromise.

"If the United States takes sincere measures and corresponding action to our leading and pre-emptive efforts, then relations will advance at a fast and excellent pace through the process of implementing definite and groundbreaking measures," Kim said.

"It is the unwavering position of our party and the republic's government and my firm will that the two countries as declared in the June 12 joint statement ... take steps to establish a permanent and stable peace regime and push toward the complete denuclearization of the Korean Peninsula," he said. "Therefore, we have declared domestically and internationally and taken various actions showing our commitment that we will no longer create and test nuclear weapons and will not use or spread them."

Kim called for stronger inter-Korean cooperation and said Pyongyang was ready to resume operations at a jointly run factory park in the North Korean border town of Kaesong and restart South Korean tours to the North's Diamond Mountain resort. For either of these to happen, sanctions would have to be removed.

The New Year speech is a key fixture in the North Korean political calendar, setting the agenda for the year to come.

In a rare letter to Seoul, North Korean leader Kim Jong Un has said he wants more meetings next year with South Korean President Moon Jae-in. The aim is "to solve the issue of denuclearizing the peninsula." (30.12.2018)

Personal information from hundreds of defectors from North Korea has reportedly been stolen. The classified data leak could put people who have fled to the South at risk from potential retribution from Pyongyang. (28.12.2018)