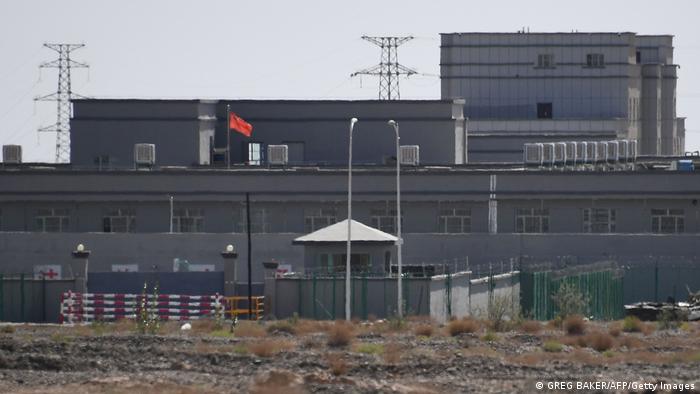 A 'vocational training center' in Xinjaing where where mostly Muslim ethnic minorities are detained,

The 160-page report, titled "Like we were enemies in a war," accuses China of torturing Uyghurs in internment camps "under the guise of a campaign against "terrorism."

She said other nations should "find the courage and mechanisms to hold China to account."

"The evidence that we are providing is making it more and more difficult for the international community to remain silent," Callamard added.

The United States has called China's treatment of Uyghurs "genocide." Chinese authorities, however, have denied committing atrocities against Uyghurs, and accuse foreign countries of interfering in China's internal affairs.

Amnesty conducted research for the report between October 2019 and May 2021. The investigation included interviews with 128 people, including 55 former internment camp prisoners, and 68 family members of people either missing or presumed detained.

According to Amnesty's findings, potentially over 1 million people have been sent to camps in Xinjiang.

The report said the Chinese government was shutting down religious and cultural sites and intimidating those who openly practice Islam.

One witness told Amnesty that the Chinese government was "trying to erase Islam."

Several others were cited saying that mosques have been torn down, and even pictures of mosques in people's homes have been replaced with the portrait of Chinese President Xi Jinping.

Many of those interviewed said they are too terrified to continue practicing their religion, fearing or sometimes knowing, that they were being monitored by the state.

The report also outlined how people were detained without warning and were taken from their homes in the middle of the night. Some were not told why they were taken until they arrived at a so-called re-education center" and forced to "confess" to crimes. Some interviewees were taken to camps because they were deemed "untrustworthy" or a "terrorist."

Detainees told Amnesty  that their lives became heavily controlled once inside the camps.

Detainees said they lived "in many ways ... worse than life in prisons in China."

Before attending required classes, some detainees were forced to sit for an entire day. They had to get permission from guards to use a bucket to urinate and defecate.

Inside the camps, an interviewee said that they were forced to attend classes on the "evils" of Islam and the might of China and Xi Jinping in order  "destroy our religion and to assimilate us … it was not Allah who gave you all, it was Xi Jinping."

What actions has Amnesty recommended?

Amnesty called on China  to "immediately release all persons held in internment camps or other detention facilities…unless there is sufficient credible and admissible evidence that they have committed an internationally recognized offense."

The NGO added that China should close all internment camps, including those under other names such as "vocational training” and "de-extremification" centers, and "stop all types of harassment and intimidation" against Uyghurs and "other predominantly Muslim ethnic groups” with Chinese ties, but live outside the country.

UN Secretary-General Antonio Guterres should "send a clear and public message" to China that their actions are "unlawful and must end immediately," it added.

Callamard told DW, "the evidence that we are providing is making it more and more difficult, I think, for the international community to remain silent."

The US and the EU sanctioned China earlier this year over the Xinjiang camps. China responded with sanctions of its own. Some politicians in the US have called for a boycott of the 2022 Winter Olympics, which will be held in Beijing.

Human Rights Watch has urged the United Nations to take necessary steps to address what it calls China's crimes against humanity targeting Uyghur Muslims and other Turkic minorities in the Xinjiang region.

The veteran politician did not give a reason, but she has faced criticism for not speaking out more forcefully against claims of widespread abuses, especially in China.