US, Germany clash with China at UN event over treatment of Uyghurs

Western countries have accused China of crimes against Muslim-minority Uyghurs during a virtual UN meeting. Beijing had warned member states not to take part, calling it an "anti-China" event. 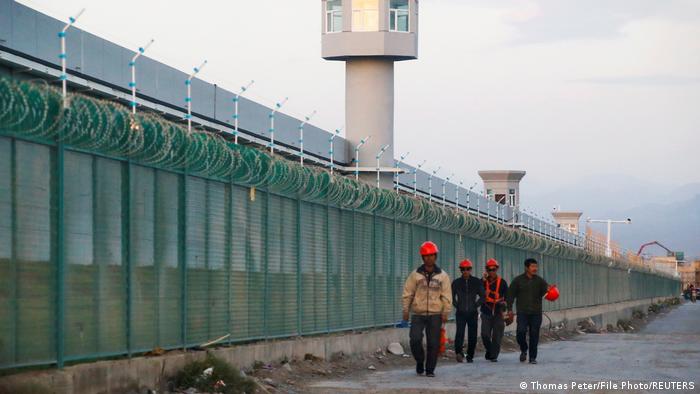 The US, UK and Germany, among others, accused China of massive abuse of Muslim-minority Uyghurs in the Xinjiang region during an online UN event on Wednesday

China had lobbied many of the 193 UN members to stay away from what it called a "politically motivated, anti-China" that authorities Around 50 countries ended up participating.

The event was organized jointly by the US, UK and Germany with co-sponsorship from Canada, Australia and New Zealand along with several other European countries.

What was said at the meeting?

"We will keep standing up and speaking out until China's government stops its crimes against humanity and the genocide of Uyghurs and other minorities in Xinjiang," said US Ambassador Linda Thomas-Greenfield. The US is unique among Western countries in officially referring to the treatment of Uyghurs as "genocide."

Germany's UN ambassador, Christoph Heusgen, commended participants who were willing to attend the event "despite some massive Chinese threats.''

Heusgen urged countries to remain committed "until the Uyghurs can live again in freedom, until they are no longer detained, no longer
victims of forced labor and other human rights abuses, until they can exercise freedom of religion and freedom of speech.''

Britain's UN Ambassador , Barbara Woodward, called the situation in Xinjiang "one of the worst human rights cases of our time."

What did China say about the event?

Chinese diplomat Guo Jiakun took part despite urging other countries not to.

"We welcome everyone to visit Xinjiang, but we oppose any kind of investigation based on lies and with the presumption of guilt," he said in his address to the participants.

The Chinese Ambassador to the UN, Zhang Jun, sent text messages to the 15 sponsors of the meeting expressing China's shock at their support and asking them to "think twice."

He also warned that continued support could be "harmful to our relationship and cooperation."

What do human rights groups say about Xinjiang?

"The evidence, from a growing number of credible sources — including satellite imagery, survivor testimony and publicly available Chinese Government documents — is of grave concern,'' US Ambassador Woodward said.

"The evidence points to a program of repression of specific ethnic groups. Expressions of religion have been criminalized and Uyghur language and culture are discriminated against systematically and at scale," she continued.

"In Xinjiang, people are being tortured. Women are being forcibly sterilized," UK Ambassador Thomas-Greenfield added.

Amnesty International's Secretary General Agnes Callamard also addressed the event saying that an estimated 1 million Uyghurs and individuals from other predominantly Muslim minority group were being arbitrarily detained in Xinjiang.

The United Nations says China's treatment of Uyghurs and other Muslim minority groups may constitute crimes against humanity. Rian Thum is a historian and senior Lecturer in East Asian History at Manchester University. He tells Brent Goff on The Day that China's policies are a "huge threat" to Uyghur culture.