China targets UK lawmakers, others in response to Xinjiang sanctions

Beijing has responded to punitive actions by the Western powers over human rights abuses with retaliatory sanctions. It has targeted British individuals and entities, days after a similar move against EU officials. 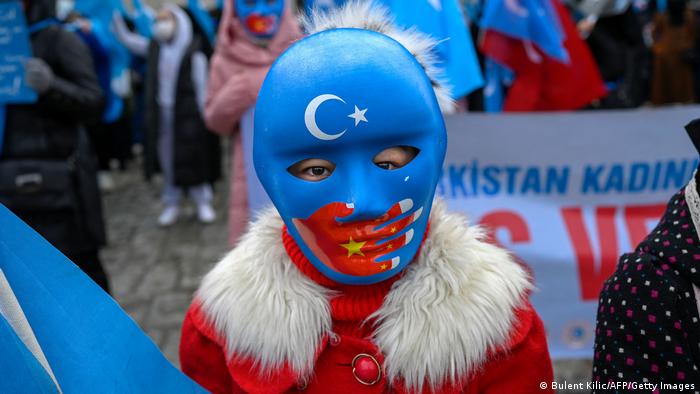 More than one million ethnic minorities have been held in Chinese internment camps since 2017.

China on Friday announced sanctions against individuals and entities in the United Kingdom, over what it called "lies and disinformation" about Xinjiang.

Beijing's move comes in retaliation to the sanctions imposed by the UK — along with the United States, European Union, and Canada — for "industrial-scale" human rights abuses against the Uighur Muslims in Xinjiang.

"The Chinese side decides to sanction the following nine individuals and four entities on the UK side that maliciously spread lies and disinformation," the foreign ministry said in a statement.

The sanctions target former Conservative Party leader Iain Duncan Smith, and other MPs including Chairman of the Foreign Affairs Committee Tom Tugendhat, and Nusrat Ghani, a vocal critic of Beijing's activities in Xinjiang.

Duncan Smith called the sanctions against him a "badge of honor."

Tugendhat wrote that the UK sanctions people who violate rights of Chinese citizens, while China sanctions those who defend them, saying: "The contrast is clear."

The entities hit by the sanctions are the Conservative Party Human Rights Commission, the China Research Group, set up by a group of Conservative lawmakers, the Uyghur Tribunal, responsible for investigating the Chinese government's alleged rights abuses, and the Essex Court Chambers.

The nine individuals and their immediate family members are barred from entering Chinese territory, the ministry said.

"Their property in China will be frozen, and Chinese citizens and institutions will be prohibited from doing business with them," it added.

The sanctions by the US, Britain, Canada, and the EU were a rare instance of coordinated action against Beijing over human rights violations.

In response, China hit back at the European Union with similar sanctions earlier this week, targeting 10 EU citizens, including politicians, for "gross interference" in its internal affairs, and for "flagrantly violating international law."

According to activists and human rights experts, more than one million people — mostly Uighurs, and other ethnic minorities — have been held in Chinese internment camps since 2017.

Mass rapes and the forced sterilization of women are also alleged to have taken place in the camps.

EU ambassadors have agreed on a list of persons and entities to be sanctioned for human rights abuses, including ones committed against China's Uighur minority.