Jens Stoltenberg has said countries such as China and India could be brought on board to save the key nuclear pact. The INF treaty is headed for a collapse after the US and Russia said they would walk out of the deal. 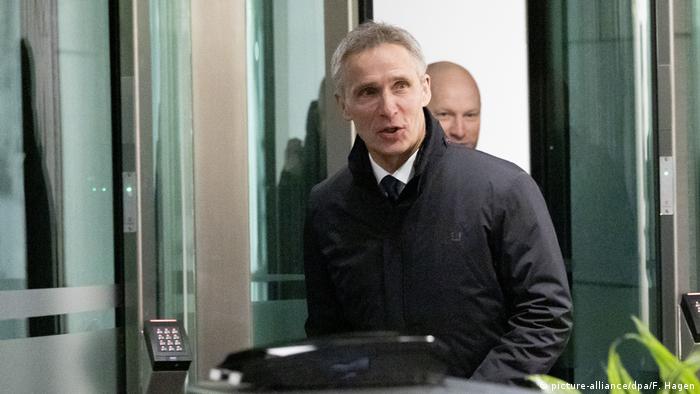 NATO Secretary-General Jens Stoltenberg has said he was open to an expanded Intermediate-Range Nuclear Forces (INF) Treaty with more members in order to save the key armaments pact.

The INF treaty is on the brink of a collapse after the US said on Friday it was suspending the nuclear pact with a view to withdrawing from it; Moscow followed suit a day later. Washington accuses Moscow of "violating the terms of the treaty," a claim that the Kremlin denies.

Stoltenberg told Germany's Funke Media Group that Russia had always complained that countries like China, India, Pakistan and Iran had developed mid-range missiles while it was banned from doing so.

"But that's not an excuse for violating a treaty," Stoltenberg said. "On the contrary, it should prompt us to strengthen this treaty and bring in more partners."

Both Washington and Moscow have expressed their openness to replacing the suspended Cold War-era pact with a broader treaty that includes more countries, although Moscow voiced skepticism over the chances of achieving such a deal.

The 1987 treaty negotiated by US President Ronald Reagan and Soviet leader Mikhail Gorbachev prohibits the US and Russia from possessing, producing or test-flying ground-launched nuclear cruise missiles with a range of 500 to 5,500 kilometers (300 to 3,400 miles).

The treaty ended a Cold War-era crisis when the Soviet Union installed nearly 400 nuclear warheads pointed at Western Europe. The US had responded by stationing Pershing and cruise missiles in Europe.

Getting China on board

Several experts have suggested that Trump's decision to withdraw from the arms treaty could also be directed at China, which has been rapidly modernizing its military capabilities.

US President Donald Trump has vowed that the US would go ahead and develop nuclear weapons unless Russia and China signed on to a fresh agreement.

"We really have no choice," Trump said during his State of the Union address on Tuesday. "Perhaps we can negotiate a different agreement, adding China and others, or perhaps we can't — in which case, we will outspend and out-innovate all others by far."

China, which is not a signatory to the INF, is not bound by its terms. In 2015, Beijing deployed the Dong-Feng 26 intermediate-range ballistic missile system. The missile has a range of 3,000-4,000 kilometers and is capable of striking most US military bases in the eastern Pacific Ocean.

The country also has at least three intercontinental missile systems, one of them capable of striking a target 11,700 kilometers away, according to the Missile Threat website.

Iran also has a diverse missile arsenal — albeit no known nuclear warheads — including medium-range ballistic missiles capable of striking US allies in the Middle East and Europe. Trump pulled out of a 2015 nuclear deal with Tehran, citing among other things its ballistic missile program.

Peter Beyer, Germany's trans-Atlantic coordinator, said all efforts must be made up to the last minute to salvage the deal and "to persuade Moscow to adhere to it."

"But let us remain realistic: if that does not succeed, then America, then NATO must also position itself differently militarily in order to restore security in Europe," Beyer told Germany's Rhein-Neckar-Zeitung newspaper.

As it stands, the US and Russia have six months to settle the dispute and salvage the INF treaty; both plan to withdraw completely at that point.