Moscow chief rabbi: Europe is ′forgetting the past′ | Europe | News and current affairs from around the continent | DW | 12.05.2019

Anti-Semitism and far-right extremism are rising, while minorities' religious freedoms are being limited, says Pinchas Goldschmidt, who heads the Conference of European Rabbis. He fears for Jews' very existence. 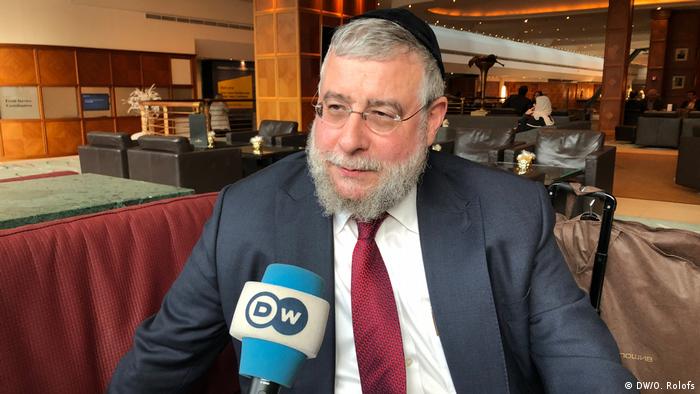 The Conference of European Rabbis (CER) is holding its 31st convention this week in Antwerp, bringing together around 350 Jewish leaders from across Europe. CER President Pinchas Goldschmidt, the Zurich-born chief rabbi of Moscow, spoke with DW about his concerns for the future of European Jewry.

DW: Rabbi Goldschmidt, nationalism, populism and anti-Semitism are on the rise around Europe. How do you see things for Jews on the continent?

PG: The situation is getting harder in Europe for the Jewish community — for many reasons. On one hand, there is the rise of the far-right again — in Germany, Austria and Hungary —who are marching around in brown shirts and SS uniforms. Then there are new laws restricting Jewish life, such as against circumcision and religious slaughter. Overall, we see Europe having much less patience and willingness with defending religious freedom and Jewish communities' safety.

Can you cite examples of this?

Our convention is intentionally happening in Antwerp. Because in Belgium, the center of Europe, with its two regions, Flanders and Wallonia, shechita (ritual slaughter in accordance with Jewish law — Eds.) has simply been banned. Politicians tell us it's not meant to target Jews, but rather Muslims and their practice. Yet Jews are collateral damage.

What kind of contact do you have with the Muslim community?

We started a dialogue with Muslim religious leaders already some years ago. We are part of the King Abdullah Center in Vienna (KAICIID), a Saudi-Austrian-Spanish initiative. Through that, we started the Muslim-Jewish Leadership Council three years ago. Around Europe and on national levels, we work with imams on combating threats to religious freedom. We support these talks even though it isn't always easy. But we believe it's extremely important. Because Jews are not only in danger from the far-right, but also from radical religious Muslims. So that makes dialogue with Muslim leaders really important.

European Union elections are two weeks away. How decisive of an election is this for you?

Very. These upcoming elections are extremely important. I think that the strengthening of forces that don't believe in the future of a unified Europe is a major danger for Europe as much as it is for the Jewish communities in Europe.

Are you afraid that Jews will have to leave Europe to be able to live as Jews in their everyday life? Will Europe become a place that de facto drives out Jewish life?

That's already happening. The number of Jews living in Europe has declined in the last 15-to-20 years, from 2 to 1.6 million people. This trend could continue.

What do you make of repeated attacks on houses of worship and religious sites — Jewish, Muslim and Christian?

Attacks on places of worship seem to be a trend. If you want to attack a religious minority, you go to their place of worship, because that's where they are concentrated. We saw this in Pittsburgh, in Christchurch and in Sri Lanka. So places of worship are in danger. So we are asking all governments and those responsible to improve security at these places and protect religious communities.

The Holocaust happened across Germany and Europe because of national socialism in Germany. But we're now 75 years beyond the Holocaust. Do you worry that right-wing extremism is also on the rise because history is being forgotten?

That's just it. The problem is that the last survivors and perpetrators are dying. So the Holocaust and the Second World War are being pushed further out of the collective memory. Europe is poised to forget what world wars were like. Europe is poised to forget just how terrible the First and Second World Wars were, and how many millions of lives were lost as a result. Europeans today just think about today, the present. They forget the future and they forget the past.

Read more: The changing culture of Holocaust remembrance in Germany

German President Frank-Walter Steinmeier has called for a decisive fight against anti-Semitism. He lamented the rise of ant-Semitism in modern society and on the internet. (10.03.2019)

The German capital has put together a comprehensive approach to fight anti-Semitic hatred. So why is this initiative happening at a local and not a federal level? The reasons, DW found out, are complex. (13.03.2019)

'Anti-Semitism is always in the background'