′Eva Stories′: Remembering the Holocaust with Instagram | Europe | News and current affairs from around the continent | DW | 02.05.2019

An Instagram story about 13-year-old Eva Heymann, a Hungarian Jew who was murdered in Auschwitz, has gone viral. The creators want to bring Holocaust remembrance to a social media generation, but not all are pleased. 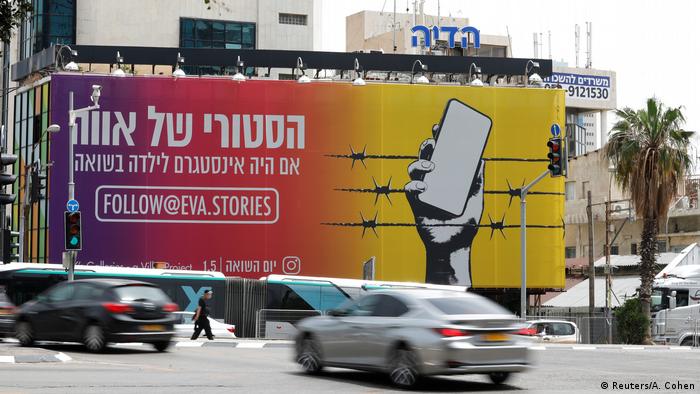 The words in English and Hebrew sit at the bottom of the shaky hand-filmed phone video. Girls giggle audibly as they run towards an ice cream cart — and past a giant swastika flag.

The camera turns for a selfie video and we meet Eva, the protagonist of eva.stories, an Instagram video project that tells the real-life story of Eva Heymann — a Hungarian Jewish girl who danced, dreamed of being a press photographer and was sent to Auschwitz in June 1944, where she was murdered in October.

Starting on February 13, 1944 — her 13th birthday — and going up through her deportation, Eva kept a diary. She is often referred to as the Hungarian Anne Frank.

It's this text that eva.stories has brought to life through actors in 70 short, mobile-phone-style film clips, as if Eva had a cell phone during the Nazi occupation of Hungary. The clips were released as disappearing videos over a 24-hour period on May 1 and 2 to commemorate Yom HaShoah, or Israel's Holocaust Remembrance Day, when the country remembers the six million Jews killed by Nazi Germany during World War II.

Eva's videos are also available on the account landing page. Underneath them, the promotion image seen on billboards and building sides across Israel: A hand holding up a cell phone against black barbed wire and Instagram's trademark fading sunset colors, and the question: "What if a girl in the Holocaust had Instagram?"

It's a provocative combination: a social media platform with a reputation for self-focused, superficial entertainment and a defining tragedy of the 20th century whose importance, many fear, is already being trivialized by European far-right parties and could be further reduced as the last generation of survivors dies.

But the creators of the project, the father-daughter team of high-tech millionaire Mati Kochavi, 57, and his 27-year-old daughter, Maya, see it as an ideal way to bring a younger generation in direct contact with memories of the Holocaust.

"In the digital age, when the attention span is low but the thrill span is high, and given the dwindling number of survivors, it is imperative to find new models of testimony and memory," Mati Kochavi said in a statement. Eva.stories wants "to use social media to create a new genre of memory, and we hope in this way to bring viewers close to Eva's life and to the depths of her soul," he added. 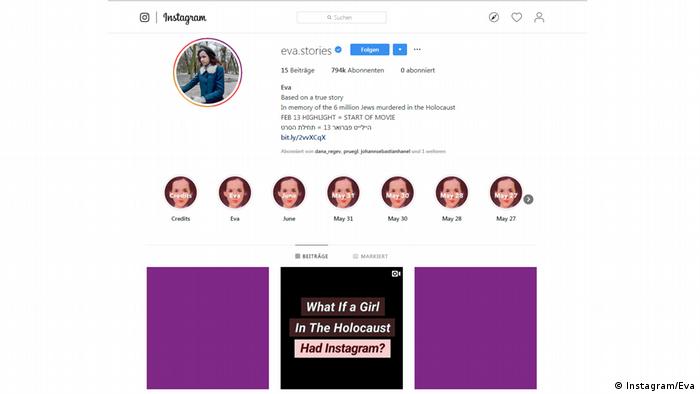 The eva.stories account saves the disappearing videos under dates so they can be watched again later

Eva.stories was promoted with a billboard campaign in Israel and a short trailer released days before, which went viral. Its main target audience is Israelis between 13-30, and it reportedly garnered more than 100 million views in 14 hours, with 3 million Israelis entering Eva's profile. 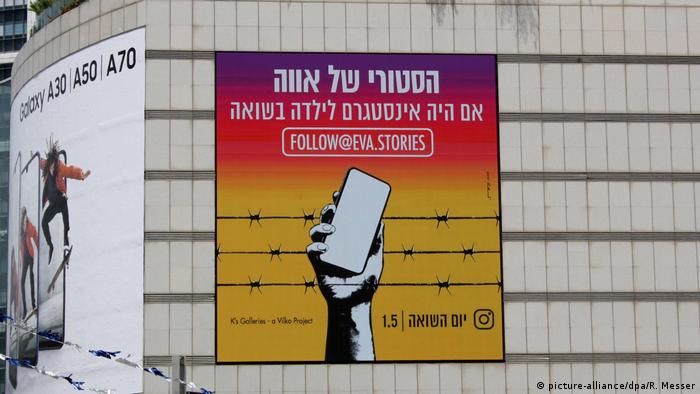 'Eva Stories' promoted itself through billboards and through an online trailer

Its reach has gone far beyond its intended audience, however, with Israeli Prime Minister Benjamin Netanyahu tweeting before the release that he had watched the videos.

"I want to encourage you, each and every one of you, to also make your own story about people who were murdered in the Holocaust, so that the world will understand and so that we will remember what we have lost – and what we have gained back."

On Wednesday morning, eva.stories had 318,000 followers, and by Thursday afternoon that number had risen to around 900,000. In comments on the platform, as well as on other social media, many praised the project for effectively using Instagram to share Holocaust history.

Yasmine Levi, the deputy editor in chief at the Israeli women's web magazine Saloona, called it a "brilliant, innovative and precise project" on Facebook and in an online editorial, said she would watch it with her 12-year-old daughter, who can "identify with [Eva] and get a glimpse into a cruel reality."

Other Facebook users similarly wrote that their adolescent children were captivated and moved by the videos.

This was precisely the goal, according to co-founder Maya Kochavi, who said that her team chose to use Eva's diaries as the basis because she was someone who "a modern kid in 2019 could connect to."

Not a 'legitimate way'

But not all reacted to the project positively, with the appropriateness of the social media platform central to the critique.

In a column for the Hebrew-language daily Haaretz, civics teacher Yuval Mendelson called the project "a display of bad taste" and said it would have "consequences": "The path from 'Eva's Story' to selfies at the gates of Auschwitz-Birkenau is short and steep."

"A fictitious Instagram account of a girl murdered in the Holocaust is not and cannot be a legitimate way," he added.

Still others suggested the controversy had generational roots. Facebook user Sivan Melnick Yaniv — the granddaughter of a Holocaust survivor — wrote that while her 12-year-old thought eva.stories was a great way to learn about the project, her elderly father "didn't understand why you would take such a tragic story and direct it with such kitschy tools." She told DW that for her parents, now in their 70s, "the combination of Holocaust and Instagram is inconceivable," whereas for young people like her daughter who are "digital natives, born to a reality where smartphones are the main media for transmitting any messages — this combination is natural." 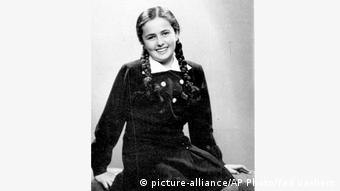 Eva Heymann in 1944 just months before her murder

Melnick Yaniv, who is the co-founder of Ananas, a community-based social venture dealing with the challenges and opportunities of education in the digital era, says that while this generational divide is considerable, she personally found the project "a brilliant, well-made, and innovative" tool.

Yad Vashem, the World Holocaust Remembrance Center located in Israel, also has an Instagram account and makes use of the stories feature, but declined to interview on the topic of eva.stories.

"The only information we know about the project Eva's Stories is from information we've seen published by the campaign," the center's communications department said in a statement to DW. "Yad Vashem believes that the use of social media platforms in order to commemorate the Holocaust is both legitimate and effective. Yad Vashem is active and engages the public in a myriad of social media channels including Instagram albeit in a different style and manner. Not only do Yad Vashem's posts contain authentic material and historically based facts, we ensure that its content is both relevant to the public while being respectful to the topic."

Melnick Yaniv underlined that in her view, "it is impossible to capture and deliver the multiple layers and atrocities of the Holocaust in any kind of media. Having said that, it is a human responsibility to remember and pass on its history to future generations" and this project is a step in the right direction she hopes will inspire educators "to promote valuable discussions through innovative platforms."