As Holocaust survivors grow older, activists keep their stories alive | Germany | News and in-depth reporting from Berlin and beyond | DW | 18.04.2019

At 95 years old, Erna de Vries is one of few remaining Holocaust survivors. A group of activists has vowed to retell her story and those of other survivors to keep alive the memory of Germany's Nazi past. 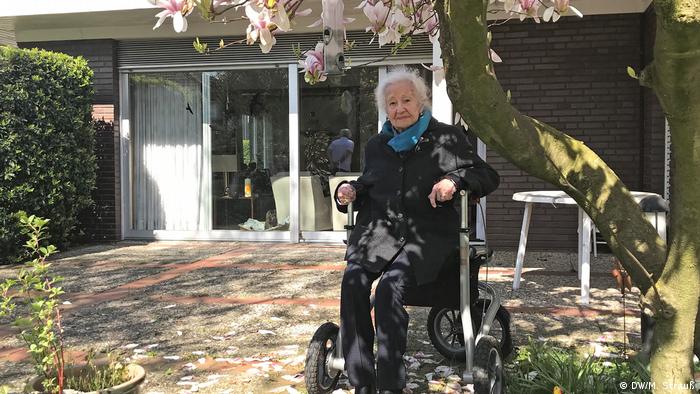 Every day, there is something that reminds Erna de Vries of her dark past. A piece of bread lying on the ground makes her recall how hungry she was. The white bark of a birch tree reminds her of Auschwitz-Birkenau concentration camp, where more than 1 million people were murdered during the Holocaust.

De Vries was deemed a "half Jew" by the Nazis because of her Protestant father and Jewish mother. Her mother was deported to Auschwitz in 1943 — and de Vries joined her because she did not want to be left behind alone, given that her father had passed away when she was a young child. Her mother is thought to have died at the concentration camp.

Sitting on her sofa today, wearing a blue and white blouse along with a long pearl necklace, de Vries recounts the horrors of Auschwitz. She is composed and pensive.

'You must survive and tell everyone what they did to us'

It's not the first time de Vries has shared her experience. She's done so many times before. She's talked to local schoolchildren in northern Germany where she lives, and to students at a nearby university. She will never forget what her mother told her the last time they saw each other: "Erna, you must fight, you must survive and tell everyone what they did to us."

Read more: An unknown story of the Holocaust brings forgotten camp 'back into Europe's conscience'

"Saying farewell to my mother in the camp was the hardest thing for me," says de Vries. "I knew full well she would never get out of Auschwitz." 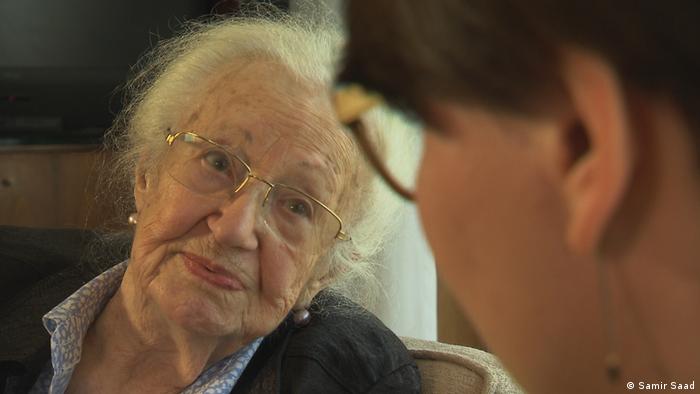 These days, it is increasingly difficult for de Vries to talk about her past, as she no longer sees or hears well and she also depends on a walking aid.

That's why she is happy 29-year-old Vanessa Eisenhardt is helping keep her memory alive. Eisenhardt is part of an organization that meets Holocaust survivors, records their stories, and shares them with young people. Just a few days ago, Eisenhardt visited a Bayreuth high school to talk about de Vries' ordeal. Afterwards, she asked the students to express their feelings in letters to the 95-year-old Holocaust survivor.

Eisenhardt and her fellow activists travel all across Germany to talk to schoolchildren about the story of Erna de Vries and other Holocaust survivors. Over the years, members of the group have interviewed some 30 survivors in Israel, Germany and other European countries, forging close relationships with them. Some of these survivors are still alive today, but many have passed away.

At the Bayreuth school, Eisenhardt talked not just about what de Vries endured under the Nazis, but also what her life was like before and after this harrowing time. Eisenhardt talked about de Vries' dream of one day becoming a doctor, about her job as a nurse and how she met her husband after the war. She also talked about de Vries' three children and six grandchildren — and her long-term goal of one day moving to Israel. 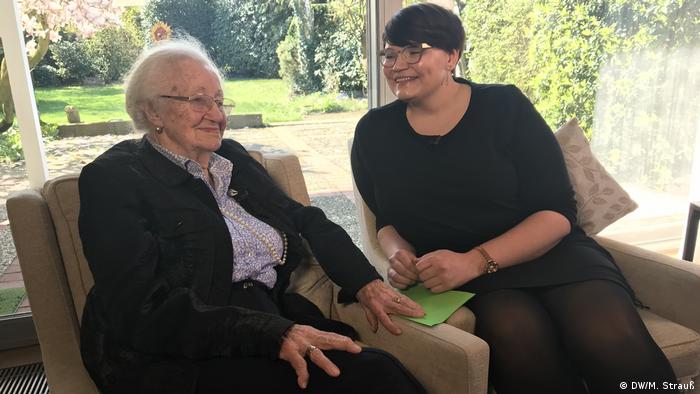 Getting past the facts and figures

Eisenhardt, who is pursuing a doctorate in history, says that often history classes tend to focus too little on individual stories and instead focus on "abstract numbers and stark images," like the 6 million Jews who were murdered in the Holocaust. But, she says, this makes the actual suffering difficult to grasp. That's why she wants to tell schoolchildren how the Nazis made life hell for people like de Vries. And how the past has shaped the present. Eisenhardt says that "stories like these show what can happen when racism and anti-Semitism are allowed to fester until it is too late."

Bayreuth students were particularly moved when they learned that de Vries' mother urged her daughter to stay alive and tell others about the persecution of the Jews. "I was about to cry," admits Ambra Rizzo, a 14-year-old student. She says she was impressed by de Vries' determination to survive and keep the memory of the past alive. 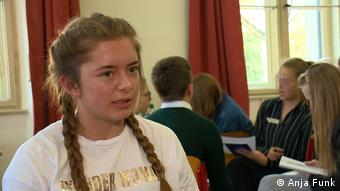 Schuberth says she was moved by de Vries' story

Sanya Schuberth, a 15-year-old student, says she was was touched that de Vries' mother did not say something like "Farewell, I love you, we will never see each other again," but instead implored her daughter to fight and keep going. "Some people who believe something like this can never happen again need to wake up," she says. Schuberth and her fellow classmates will now play a part in doing just that by keeping that memory of the past alive.

"I have so much respect for you'

After talking to the schoolchildren, Eisenhardt brought their letters back to read to Erna de Vries. One says:

"Dear Erna, I am sure you are a great and courageous woman. I cannot say it enough: I have so much respect for you."

De Vries has an entire box with letters written to her by schoolchildren, she says smiling. She is glad they are open to hearing her story because "often, people are not even interested."

She is happy to have lived a good life after the war. And that she has healthy children and grandchildren. De Vries now depends on people like Vanessa Eisenhardt to share her life story "so that people will not forget."

The mountain of shoes belonging to those killed at Auschwitz-Birkenau is among the site's most haunting memorials. Teri Schultz reports on steps being taken to ensure this history doesn't get lost.